Waiting for Tommy: a tragicomedy 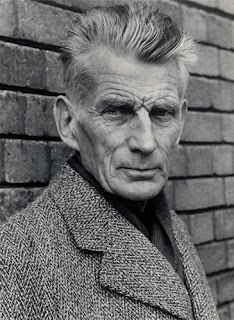 “Nothing happens, nobody comes, nobody goes, it’s awful.”

Two perfume lovers, let’s call them Vladimir & Estragon (together they sound like a Russian contraceptive!), are waiting for the revelation of the sublime through a bottle of Tommy Girl. Tommy Masterpiece is rather late to their appointment and they pass the time waiting, testing the fragrance.

Estragon struggles to extricate some substance out of the white box. He peers inside it, feels about, turns it upside down, shakes it, looks on the ground to see if anything has fallen out, finds nothing, feels inside it again, staring sightlessly before him.

ESTRAGON: Oh, there it is! Finally. Shall I spray it on?
VLADIMIR: (musingly). The last moment . . . (He meditates.) Hope deferred maketh the something sick, who said that?
ESTRAGON: Will you help me?

They spritz and sniff. Blank stare to the great unknown. They sniff some more.

VLADIMIR: Do you remember the Gospels?
ESTRAGON: I remember the maps of the Holy Land. Coloured they were. Very pretty. The Dead Sea was pale blue. The very look of it made me thirsty. That's where we'll go, I used to say, that's where we'll go for our honeymoon. We'll swim. We'll be happy.
VLADIMIR: You should have been a poet.
ESTRAGON: I was. (Gesture towards his rags.) I was writing honest perfume reviews. Isn't that obvious?
VLADIMIR: Well? What do we do?
ESTRAGON: Don't let's do anything. It's safer. Let’s place all our faith on experts.
VLADIMIR: Let's wait and see what she says.
ESTRAGON: Who?
VLADIMIR: Tommy Girl.
ESTRAGON: Good idea. Does she say anything to your nose?
VLADIMIR: No. But let's wait till we know exactly how we stand.
ESTRAGON: On the other hand it might be better to strike the iron before it freezes.
VLADIMIR: I'm curious to hear what Tommy Girl has to offer. Then we'll take it or leave it.
ESTRAGON: What exactly did we ask her for?
VLADIMIR: Were you not there?
ESTRAGON: I can't have been listening.
VLADIMIR: Oh . . . Nothing very definite. Just to be a masterpiece, five-star caliber creation.
ESTRAGON: A kind of prayer to be the perfect department store fragrance at an affordable price. The composition coincidentally happened to fall neatly into several blocks, each typical of a native American botanical.
VLADIMIR: Precisely.
ESTRAGON: A vague supplication.
VLADIMIR: Exactly.

Silence as they contemplate.

VLADIMIR: Come in? On our hands and knees. Begging for the revelation to come on us lowly ones who cannot see the miracle behind the masterpiece.
ESTRAGON: As bad as that?
VLADIMIR: Your Worship wishes to assert his prerogatives?
ESTRAGON: We've no rights any more?
Laugh of Vladimir, stifled as before, less the smile.
VLADIMIR: You'd make me laugh if it wasn't prohibited.
ESTRAGON: We've lost our rights?
VLADIMIR: (distinctly). We got rid of them. The day we relinquished our faith for the one placed on experts.


*Tommy Girl is the ultimate McGuffin, as Hitchcock used to say: a plot device about which the characters care desperately, but the audience isn’t meant to give a damn.

With loving admiration of Samuel.

For other interesting takes on Tommy Girl, please check out Scent Signals and Perfume Posse.