Poivre by Caron plays out like J.S Bach's double concerto for 2 violins in D minor, 1st movement: Two complimenting themes, carnation and clove, in contrapuntal dialogue, one finishing off the phrase of another in a leitmotif which manages to punctuate time with its own special seal. Despite its name, which means pepper in French, and the vicious-looking studded with peppercorns bottle, Poivre features the hot "king of spice" in a supporting role. To bring the musical analogy full circle, let's just say pepper in Poivre is the basso continuo. 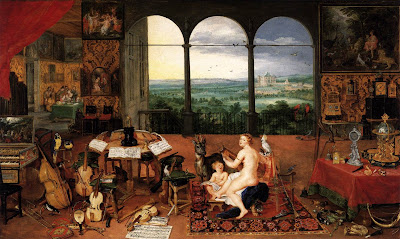 Poivre is the kind of fragrance that creates the feeling J.S Bach compositions stir in my soul and has been a longtime companion for as far back as I was aware of Caron; if not as far back as Bach. There is such contextualised coherence that everything in the world seems at its rightful place, everything in perfect, clashing harmony. If the composer once walked 200 miles to hear Dieterich Buxtehude play the organ, I'd walk on hot coals to get an ounce of Poivre parfum in its vintage state.

History of Creation
In 1953, Félicie Wanpouille -savvy of the emergence of a different aesthetic inaugarated with the New Look by Dior- asked perfumer Michel Morsetti for a fragrance that would be out of whack with its times. Morsetti had already created (at least 2) classics in the Caron stable: Farnesiana (1947), Rose (1949), and Muguet du Bonheur (1952).  The fifties were all about good-mannered lactonic florals and sheer floral chypres continuing from the late 1940s. Only Youth Dew was braving the wave, making it possible later for Cinnabar, Opium and all the rest of the Medina-spice caravan-brocard tapestry orientals that followed. Michel Morsetti obliged and in 1954 Poivre emerged; impulsive, rich, sinful, drop dead sexy! "Parfum de la femme moderne" as per the vintage advertisements: the perfume of the modern woman.
The bottle design with the peppercorn studs was no doubt a throwback to classic pomanders which relied on cloves for their antimicrobial prophylactic properties; perfume as medicine...

Scent Description
The original 1950s advertisements featured a Chinese-style dragon, in tune with the firecracking pyrotechnics of the fragrance's fiery breath.  The daredevil spices open the scene, intense clove, flanked by pepper, and they come back again and again in an endless recycling and expansion of the leitmotif, a structure that is reminiscent of older ways of composing, but maxed out to orgiastic effect. The lush floral chord is built on carnation and ylang ylang, the peppery bite of one falling into the solar embrace of the other. As the scent progresses, there is a hint of vanilla, hazy opoponax and leather on the skin, a soft focus camera lens on a racy subject. The combination of carnation and leather brings to mind another Caron legend, En Avion, dedicated to women in aviation. 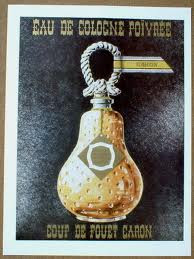 Coup de Fouet & comparison with Poivre
Poivre was conceived as the original extrait de parfum creation out of which Coup de Fouet (a most brilliant & fitting name, "crack of the whip") emerged as a diluted Eau de Cologne Poivrée. The theme is similar, the effect somewhat lighter in the weaker concentration, with a boosted effect of rose that is orientalised, spicy and raspy, still mighty impressive. Coup de Fouet is as warm as a fur coat and as commanding attention. It prompted writer Susan Irvine to  state it's "what Cruella de Vil would have worn"; so if you're the soft type crying over those poor 101 Dalmatians and can't manage a streak of bitchiness, don't even bother.
Coup de Fouet nowadays is offered at Caron boutiques as the Eau de Parfum analogue of Poivre extrait, the latter also available there from the fabulous crystal samovars affectionately referred to as "urns".
Both concentrations are totally passable (nay, downright alluring!) on men as well. 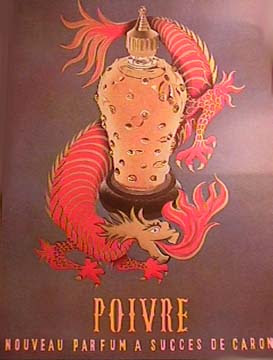 Reformulation of Poivre and Coup de Fouet
Contemporary batches of both fragrances seem to insist on a mustier, soapy rose and have less of a spicy oriental character, falling into the limbo state of floriental. Sadly Poivre (and Coup de Fouet as well, since they share those notes) faces IFRA restrictions on spicy materials which no doubt will leave future generations wondering what all the fuss was about anyway. Tragic, in view of Poivre (in the classic peppercorn flacon in Baccarat crystal) ranking as #3 of "top most expensive perfumes in the world" [$2,000 for 2 oz]....
When this happens the dragon loses its fire, the whole world gets out of whack and Bach isn't be there to save the day.

Painting "The Sense of Hearing" by Jan Brueghel the Elder. Ads via beckerstreet.com and vintageadbrowser.com
*Share with link: Thursday, January 05, 2012