In Oscar Wilde's tale "The Nightingale and the Rose", drawing upon an ancient Sufi tradition, roses are dark red like blood, bearing the price of sacrifice for the sake of beauty and love. In L'Artisan Parfumeur Voleur de Roses we witness the dark, earthier aspects of a nightime rose garden which blossoms, dense with foliage, only when true love manifests itself and a nightingale sings ever so sweetly as its pierces its heart upon the thorns. 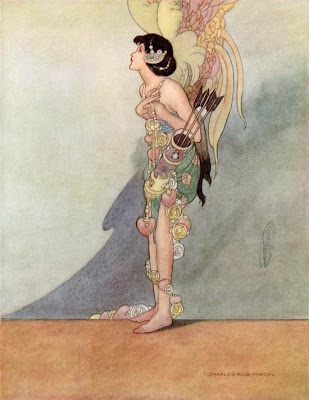 Even though men are not known for typically wearing roses in the Western world, in Arabian countries they embrace those dark, almost gothic roses flanked by pungent woody notes like oud and patchouli. For those men and women with an adventurous heart, L'Artisan Parfumeur created almost two decades ago one of the most characteristic combination of those two polarising essences: the brutal yet tender collision of rose and patchouli.

Voleur de Roses (Roses' Thief) is like the granpa of niche patchoulis on the market, as it came out as early as 1993, composed by perfumer Michel Almairac (well known for his work on Chopard Casmir, Gucci Rush, several Bond no.9 scents such as Fire Island and The Scent of Peace, the new Chloe and the re-orchestration of Zen into a springly fruity floral). Subsequently all brands jumped onto the bandwagon of patchouli revival (it had been a dormant note since its heyday in the 1960s) and now it has not only swept the market as a protagonist in the new "pink chypres" (faux woody florals that substitute the base of moss with patchouli and vetiver) but also the much maligned -but deservedly most of the time- "fruitchoulis". Imagine a current bestseller, Chanel's Coco Mademoiselle, without the accord of the soiled petals gathered off the ground which made it so contemporary and attractive to young women: it would have been impossible without a forebearer providing the skeleton of the idea, such as Voleur de Roses. Patchouli and rose is nothing new, as the dark, deep and sweet earthiness of the former seems to make the essence of the latter smell like petals unfurling into infinity. All perfumers know that. But in the L'Artisan scent this notion was put front and center, united in an accord which projects with both strength and sensuality. The rose is not sour and it feels natural, not like a photorealistic rose on the stem, but rather true to the rich liqueur-like essence; boozy and contrasting warmth with coolness.

Although built upon two distinct and contrasting elements, the structure of Voleur de Roses is a powerful synergy of these antithetical forces, uniting into a stentorian voice which denies rose of all its archetypal attributes: romanticism, femininity, delicate elegance, softness. Instead this fragrance is like the torrent that ripped rose bushes off their petals and leaves (hence Voleur!) and left the premises like a patchouli-wheeled tractor ran through them repeatedly. If you do not like patchouli as a note (and if you're a reader who didn't live under a rock for the past 15 years you'd recognise it from overexposure in many contemporary fragrances) you're advised to back slowly away and never look back or you'll turn to salt like Lot's wife. This is a direct, over patchouli scent which gains in that odd camphoraceousness that patchouli soli-scents exhibit as time passes ~Borneo 1834 or Prada Intense are good examples of that sort of thing. It figures that L'Artisan featured a stand-alone Patchouli (later substituted by Patchouli Patch) on their catalogue previously: it's the stuff that niche fragraces capitalised on; focus on the raw materials themselves, far away references, emphasizing different facets of the essences.
Voleur de Roses is a fusion of two essential elements that comprise over 3/4 of total number of fragrances in both feminine and masculine perfumery, from floral chypres and masculine woodies via floral woodies and from Chanel through Guerlain. But the formula in this L'Artisan is also a careful framing (rather than ornamentation) of that skeleton with fruity accents (hints of strawberry, a whiff of plum) and a slightly musky-salty note. The composition is linear and a love-it-or-hate-it opus, one clear message in a perfectly coherent chord reverbarated into eternity into a hollow stone-built church. I personally like it very much indeed...but then I am a devotee of the sweet earthiness of aged patchouli that is reminiscent of burying one's hands in wet black soil...

Those who find they'd like the idea of rose and earthy notes/patchouli combined should also try Agent Provocateur's original scent in the pink "egg", Une Rose by F.Malle, Parfums de Rosine Une Folie de Rose (a lighter and easier interpretation) as well as Rose d'Homme by the same company (a decidedly masculine take on the idea), and also the more chypre-leaning Rose de Nuit by Serge Lutens.

Perfectly unisex, although originally marketed as masculine (at least going by what the older bottles read on the top of the cardboard box), Voleur de Roses is available online at L'Artisan and at boutiques specializing in L'Artisan scents.