Hearing that Marc Jacobs's latest foray into fragrance, Daisy Eau so Fresh, is directed at a "younger audience", one pauses to wonder if 5-year-olds are in need of a little grooming cologne for when they're going out to the playground to meet their friends. The original Daisy, in the bottle with the white rubber Takashi Murakami daisies, is already the personification of the young & hip bright fruity floral: Nothing earth-shattering, a pleasant smell that stands as the perfect "safe floral" for office wear, casual parties and anytime you just can't be bothered to indulge in the splendor and challenge of niche brands such as Serge Lutens, Amouage or Etat Libre d'Orange. In fact the canon of Marc Jacobs is unchallenging, inoffensive perfumes, with possibly the exception of Bang, an entry reminiscent of more exclusive-niche fragrances. Daisy Eau so Fresh, a flanker fragrance to the original following the success of its antecedant, continues on the same sure path that the rest of the Jacobs bottles are merrily heading with a rather nice twist. 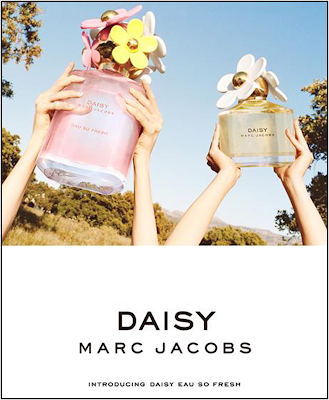 What's that twist? Daisy Eau so Fresh is taking a slightly retro route to do so, contrary to the ad copy ~perpetuated via online media, haven't these people smelled the scent?~ which advertises this as "more fruity, more bubbly, more fun". We're obviously dealing with a marketing emphasis on what sells best (which in itself isn't very promising), because this isn't fruitier than the original, nor is it more "bubbly". On the contrary the fragrance's effect is composed in a roundabout way via the distinctive nostalgic note of violets: lots and lots of green violet and violet leaves (via ionones and methyl octyne carbonate /Nonadienal I'm led to believe). Allied to fresh rosy-berry accents and "clean" musks it is a scent on the cusp of "scrubbed" and pear-liquer-like: its sweetness comes via ways that do not recall foodstuff or lush white flowers.
In fact the formula reminds me quite a bit of the re-orchestration of Givenchy's L'Interdit from 2003 in the rounded shoulders rectangular with the small gold cap (there was another reformulation in 2007); same with the violet leaves heavy Balenciaga Paris from last season: the leitmotif is similar and it's a very pretty idea in the realm of "fresh" or "crisp" in a non-citrusy context that should be easy for spring or summer wear. Sillage and tenacity are average for Eau so Fresh.
If pressed to choose between the original Daisy and this one, I would probably pick Eau so Fresh over it, although you'd have to be quite persistent in your persuasion to begin with.

The company certainly used a bit of fanfare during the press launch: Guests were greeted by a horse named Dotty, proceeding to spend their evening sipping cocktails, eating steak, and listening to a DJ set by Daisy Dares You, all the while surrounded by the sweet aromata of raspberry and lychee. Top model Hannah Holman is the face of Marc Jacobs Daisy's latest advertisement, photographed by Juergen Teller.
The bottle, taller and more rectangular than the original Daisy, with a cluster of 6 rubber daisy petal appliques in white, yellow and pink, is simply adorable in its kitsch-cute way, even for a decided aesthetics cynics such as myself.

Daisy Eau so Fresh hits the US market on February 27th at major department stores in 75ml and 125ml of Eau de Toilette.