The newest Prada fragrance Infusion de Tubéreuse (announced here alongside the masculine Infusion de Vétiver), the latest in the Ephemeral Infusion collection, seems like a triumph of looks over essence: literally! 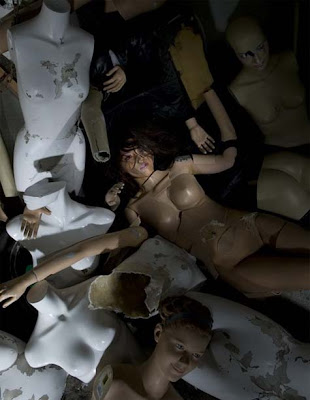 The gorgeous packaging is based on an old print in the Prada textile archives, where the petals of the flower seem immersed in ink and pressed in a dégradé manner on the carton. I especially like a small details: the caps are "dressed" in the same material so as to co-ordinate. In short, it looks supremely lovely in a 70s Five Easy Pieces way: you suddenly become enamored with cross-eyedness! A new Infusion by Prada would be just as well be launching as "Infusion of a Longing", as the Prada line has so many fans. Obviously someone at the marketing and designing team has a pretty good idea of what they're doing. But, alas, those hunting for a true tuberose scent, that strange mystical mistress of the night with its intense mix of blood, rubber (methyl salylilate) and even meat aromata, will be more than a little crestfallen by this dematerialisation.

In drawing terms it is the opposite of Albercth Dürer's Underweysung der Messung (Instruction in Measurement), showing an artist viewing his subject through a window, compartmentalized into squares, in the hopes to methodically understand and record each detail on gridded drawing paper.
The press material talks about an unexpected tuberose from India, but having familiarised myself with that incomparable, intoxicating essence I remain a little sceptical (Thank God they do mention it's a "fantasy infusion"). No rubbery wintergreen start like in the icy Tubéreuse Criminelle (Serge Lutens), no creaminess as in the diva-esque Fracas, no coconut smidge alongside the mentholated greenery as in Carnal Flower (F.Malle), no decaying indoles to talk about. The woody-musky drydown of the Prada ~and especially the Infusion~ line is there though. Like in Infusion d'Iris, there really isn't a dominant effect of iris ~but rather of a woody blend (much like in Infusion d'Homme too). Was the idea to do a brief impression with a lustrous, cheery beginning like they had done with their Prada boutiques exclusive #6 Tuberose (also opening on neroli notes) or was it simply in line with the Infusion concept of olfactory poltergeists, a "Pradanade" so to speak, spoken in hushed tones and felt in its effect more than being seen? 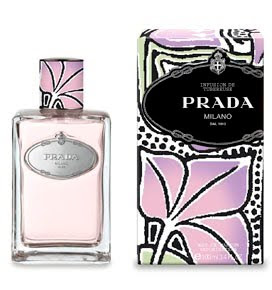 Perhaps there really is no reinvention of the wheel after all: Do Son by Diptyque was a timid, introductory tuberose gouache with a subtle almost skin-like effect in drydown. Not very true to the essence rendered from the flowers, even though it feels like a composition with naturals; and this is the diverging difference with the Prada. To the pastoral theme of Diptyque, Prada and Daniela Andrier intentionally juxtapose futurism, via more amped up synthetics, which account for a superior staying power, even though it's discreet enough to have those familiar with the Grand French Manner (I assume you're taking the hint) bound to be complaining about it.

As anyone who has a hankering for seeing how "notes" of aromachemicals find their way into the commercial blurb for consumers on the other hand, I have to give them credit for mentioning "dynamone", a Penta chemicals manufacturing product with a sublty amber aroma that is indirectly derived from cistus ladaniferus, in the composition. Why haven't you heard of it before?, you ask. (In fact you have, if you paid attention; it's also included in Closet Queen by Etat Libre d'Orage) Because it's hard to harness into a formula due to technical problems, even though its diffusiveness and tenacity provide a helpful hand in prolonging "skin-scent" accords, such as this one (see a similar concept of that via another route in Prada's L'Eau Ambrée). Personally I wasn't too impressed by the previous limited edition, Infusion de Fleurs d'Oranger , and this one seems to be riding the fast way to nowhere just like Bobby Eroica Dupea. I'll stick with the excellent L'Eau Ambrée myself.

Prada Infusion de Tubéreuse for women is a blend of notes of Indian tuberose, petitgrain bigararde, Italian blood orange and dynamone. It retails at €67 for 50mls at major department stores, available starting April 2010.