When we had introduced Hilde Soliani and her niche line of perfumes to the English-speaking world, little did we know she would become something of a cult figure, especially after the introduction of her second line of perfumes inspired by her theatrical performances in Parma. Our past choice of a suave, hedonically smoking Humphrey Bogart for illustrating Bell'Antonio proved such a hit, that a respected online decanter chose the pic to feature the scent and even Hilde herself run away with it on her official presentations! But it's not surprising to us that someone as classic and unique as Boggie should front one of her scents: Hilde's fragrances have something unusual about them even within tired genres such as the fruity floral, the gourmand or the tobacco masculine: they brought a touch of Inglese Italionato e un diavolo incarnato ~the sensibilities of an Italian brand yet garlanded with an international spin that makes them instantly recognisable across the boards, caressing memories of childhood and impressing with its panache: The effect of a Maseratti smirking secure in its beauty at a group of gasping Fiats. Someone is doing a pretty good job in that Parma laboratory! 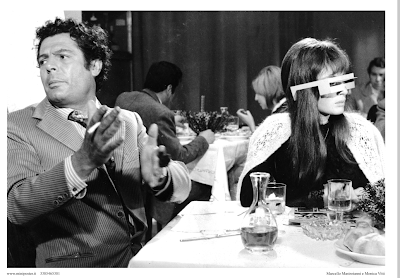 Hilde Soliani's upcoming fragrance line, exclusively previewed/reviewed on Perfume Shrine today, is called Profumo e Gusto in Libertà and is inspired by her love of haute cuisine, which is as Italian as Marcello Mastroianni or Monica Vitti are. Indeed nary does one need to sit at a small local trattoria in the greater Lombardia area to appreciate that for Italians food is perfume for the mouth! The four new Hilde Soliani fragrances inspired by this cultural tradition are: Acquiilssssima, Doolciiisssimo, Saaliiisssiimo, Freschiiissimo ~everything is onomastically attenuated to an hyperbole because they denote the pleasure one derives from refined flavours (although if I am anything to go by, I predict one hell of a confusion when trying to spell for someone or online, but let's not be grumpy); one after the other they are meant to interpret the watery, the sweet, the salty and the fresh/tangy. Let's take them one by one! 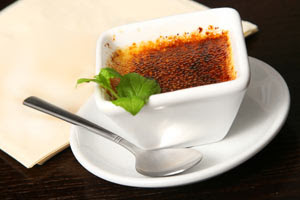 *I found myself transfixed by the succulent and rich tobacco ambience that Doolciiisssimo exudes. Hilde divulged that the idea began by la crema catalana with tobacco leaves which she had first eaten in Milan ~too scrumptious for words, apparently and by Jove if you have even the tiniest affinity for the hedonic bouquet of a good cigar with its gingerbread and honeyed tones, then don't walk, run to secure a sample or a bottle of the Doolciiisssimo. Though I normally look at sweet fragrances with a certain disdain due to overexposure to cavity-inducing potions that float around giving me a diabetic coma by association, this perfume is nowehere near what one would call "sweeeeeetest" (which is what its Italian name means). In fact a striking dissonance between name and composition is what makes it mouthwatering and one of the best gourmands I smelled recently: The cut-hay and almonds feel of tonka beans is made richer by vanilla (Madagascar absolute) while retaining a little tobacco and cherry-pie tonality due to currants/ribes. If you have liked Bell'Antonio and Vecchi Rosetti [reviews linked] you are probably going to like Doolciiisssimo too; and if you found the former a bit much in the woody department, then you're also nicely set. 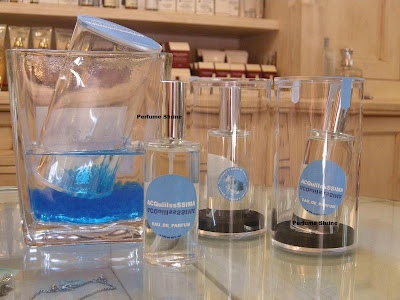 *Acquiilsssssima has a personal story in the background: Claudio Sadler, the famous chef, create a dish for Hilde's birthday which she cunningly took as a point of departure for a "beach air" scent: If you have ever eaten at a small taverna on a Greek island (click for pic) under the shady pines with gaily vibrant geraniums and lush jasmines potted all around and the salty remnants of a sea-dip still on your tanned, tired arms then you would know how Acquiilssssima feels! The salty tang comes from seaweed and its marriage to jasmine is akin to taking a boat to the isles. But what is most interesting is that I detect a little oakmoss in the background, that chypre tonality which blends so well in our hot climate and which provides the murky backdrop to a composition that is otherwise full of watery and light notes.

*Freschiiissimo on the other hand is unusually refreshing, eshewing the customary watery notes for a cool blast of "short" spices such as ginger allied with lime, which gives an effarvescent quality to the fragrance, like champagne bubbles bursting on the surface of one's taste buds in a sorbet quenchingly devoured after some vigorous samba on the dance-floor.

*Last but not least, Saaliiiissssiimo is taking a dare with an uncustomary composition which oscillates between the salty and refreshing undercurrent of vetiver grass and the golden bitterness of saffron as well as the caramelised bittersweet note of licorice (in itself reminiscent of anise). The feel of that fragrance is lightly salty and woody with a starchy feel, full of comforting saffrony risotto stuffed with peas and homemade broth. There is also dill listed, but I confess that I could not detect it prominently.

The new Hilde Soliani fragrances come in Eau de Parfum concentration in 100ml diaphanous glass bottles and will be featured shortly in New London Pharmacy and Luckyscent (where the rest of her fragrances are already carried, check them out).

On Sunday 21 June starting at 5pm at Desenzano del Garda (bs) the Profumeria Parolari will hold a special event with Hilde Soliani: Come and enjoy 7 different flavours of ice-cream inspired by the scents of the older and the new perfume collection called Profumo e Gusto in Libertà (Perfume and Taste Liberated!). The flavours are: Acquiilssssima, Doolciiisssimo, Saaliiisssiimo, Freschiiissimo, Sipario (pina-colada-like), Stecca (inspired by tomato vines) and Fragola salata. At 6pm Hilde will give an interview and there will be singing. Sounds like an evening fit for all of us Italionatos!

In the interests of disclosure, I was sent a sample of each scent from the manufacturer.
Pic of Marcello Mastroianni and Monica Vitti via hyper-ware.com. Crema catalan via rusticpalate.com.
*Share with link: Thursday, June 18, 2009