Frequent Questions: How do I date my Diorissimo bottle?

One might answer that question quipping you could dine it and wine it, but jokes aside let's focus on how you would date your Christian Dior Diorissimo fragrance in the sense of chronologising it; a question on the back of the minds of many perfume enthusiasts who are justifiably confused. It's kind of tricky, indeed, since Diorissimo has changed so many times and so often the details on the bottles are minor. In this guide we will try to sort out the different bottles and versions of Diorissimo, so it becomes much easier for all of our readers. 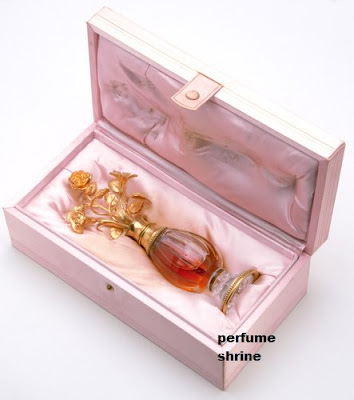 The initial presentation of Diorissimo, created by Edmond Roudnitska in 1956, came in what is known as the amphora bottle. A flacon of Baccarat crystal designed in the shape of an ancient amphora with curved body and a bronze bouquet of flowers sprouting off its top. That presentation held the parfum and is extremely rare and expensive nowadays. Basically it's a museum piece, therefore it shouldn't concern you when buying online yourself; I am including it for the sheer plush of its coffret and its reclining beauty.

The amphora shape in rather simplified form became the design for Diorissimo later on. Some of these bottles rise their heads from time to time, at costly prices. The stopper has a bulbous shape. The same design was recently used for the Collection Particuliere Passagere. 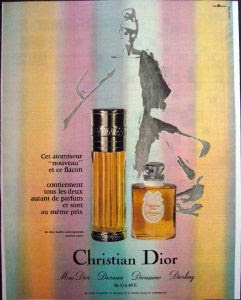 In the interim, today's bottle design was first conceived and introduced in the 1960s. This 1965 ad with the design by René Gruau shows two designs for Diorissimo: a tall cylinder of leveled glass with a wide, round silver cap with the name in a band across its breadth; and a smaller flask-shaped flacon with a transparent round cap and the name on a thick-paper insert on the front of the bottle, crowned by the characteristic little bow of parfums Dior.

The classic houndstooth design established itself in the end of the 1960s, the 70s, all through the early 80s. The juice appears darker than it was in real time, because of oxidation due to the passage of time. The versions circulating included Eau de Toilette and Eau de Cologne, lighter concentrations than extrait de parfum, but bearing all the radiance and beauty of the original formula. These are the bottles I recall on my grandmother's vanity as a small child.

They were splash bottles, a usual design for the era, but there was also the option of attaching a spray mechanism, as depicted in this photo. 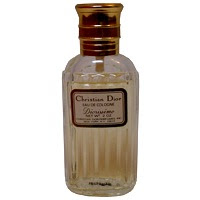 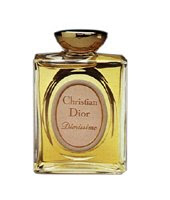 The parfum version was encased in the previous design flacons with the cap in gold. And an Eau de Cologne was also circulating in this tall presentation. Much later the same version took on a plastic spray mechanism with box still in black and white houndstooth and a pink oval on the front.

When LVMH took over Christian Dior in the mid-90s, all the classic fragrances in the line took another uniform shape: the flask-like bottle, topped with a rounded diaphanous cap; essentially a throw-back to the past. This design was extended into all the special limited editions of the Dior line as well (Dior me, Dior me not, Chris 1947, Dior Lily etc.) 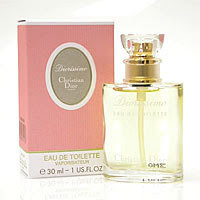 Up till fairly recently the Diorissimo bottles circulating were these: pink box, Diorissimo tag in white oval. The bottle was shaped as usual, the letters cursive and on the glass itself, no sticker. This is the version that Luca Turin granted 4 stars in his "Perfumes, the Guide", saying"today's Diorissimo is unquestionably different from the older version although still a thing of great beauty". The colour of the juice was straw-like and lighter than before, although not as clear as present juice. 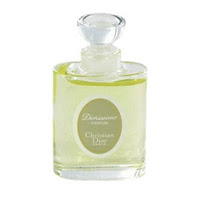 The extrait de parfum however took on a curiously clear tint which indicated the lack of certain heavier molecules. The oval with the logo is actually greyer than the photo indicates.

Diorissimo has very recently (2009) changed it packaging yet again to denote the impending restrictions implemented to the levels of hydroxycitronnelal (a lily of the valley aroma-chemical and the main constituent of Diorissimo's muguet bouquet): the newer white packaging with pink “oval” bearing the name states hydroxycitronellal further behind other ingredients instead of the slightly older batch of pink packaging with white oval.

The change is subtle and very cunning: while right now the packaging can be an indicator of batches, the introduction of a different colour schema is an optical blurring, ready for further –and final- chopping off! The consumer will never be able to realise without minutely examining the allergens list, which -let’s face it- is not what most people do.

Diorissimo bottle collecting is also tricky because the fragrance does not keel well over the years, being rich in highly volatile essences and swiftly deteriorating aromata resulting in diminished freshness. Therefore caution should be employed when eyeing auctions of older bottles.