Although in nomenclature lily of the valley is easily confused with lily and its own varietal richness, the two are completely different flowers and in this scent guide I will try to analyse their olfactory differences, their participation in the bouquet of classic and modern fragrances, the materials used to render them in perfumery as well as a list of perfumes that highlight their graceful beauty. The first part deals with Lily of the Valley or Muguet, while the second part will deal with Lily. 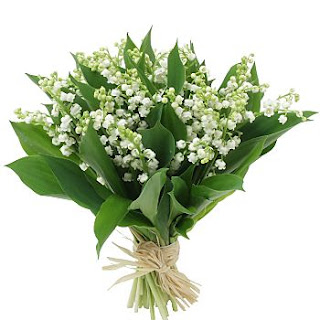 The raindrenched earth after spring showers and the wet foliage remind me of the lyrics by songwriter George Brassens:

May 1st has been inexctricably tied to Francophiles’ minds with one of the loveliest spring blossoms and its neo-Victorian image: lily of the valley (Lys des vallées) or, as the French commonly call it, muguet (pronounced mygɛ). And it’s for a reason: it’s the traditional flower offered on this day and one can routinely see street vendors selling nosegays on the French streets. The tradition goes back to Charles IX who on May 1st 1561 inaugurated the custom.It is also a symbolic gift for 13 years of marriage and is traditionally used in bridal bouquets thanks to its enticing scent.

The etymology of muguet is said to derive from muscade (nutmeg), since the smell of the flower has an indefinite nuance reminiscent to it, which became mugade, and finally muguet. A lucky symbol ~it means “return of happiness” in the language of flowers~ the delicate beauty of lily of the valley is however poisonous (especially its reddish fruit) due to convallatoxine, convallamarine, and convallarine; a brave irony on the part of Creation!
Lily of the valley/muguet (Convallaria majalis) is a herbaceous perennial plant prevalent in Asia, Europe and the Eastern USA, with characteristic bell-shaped little flowers, hence its other name May Bells. But its alternative names "Our Lady's tears" and "Male Lily" are more poetically evoctive: Legend wants Eve to have shed bitter tears after the Lapse from the Garden of Eden which falling onto the ground transformed into the white little blossoms. Another medieval legend wants Saint Leondard de Noblac, a knight in the court of Clovis I (of the Limousin region of France) and patron saint to prisoners of all kinds, to have battled with a dragon (a common medieval theme) in which his shed blood trasformed into lilies of the valley. But although one usually associates the delicate green floralncy of its aroma with females now, the term "Male Lily" has another explanation: It has been a favourite perfume for men ever since the 16th century, to the point that up till the 19th century the term muguet was linguistically used to denote an elegant young gentleman!
Another legend wants the Greek God Apollon to have tapestried the mount Parnassus with lilies of the valley so that the Muses wouldn’t hurt themselves if they fell...Classical antiquity paid great attention to the seasonal celebrations of nature and the zenith of the Roman celebrations of Flora, goddess of flowers, culminated on May 1st.

Lily of the valley is technically a green floral with rosy-lemony nuance*, whereas lily is a white, spicy floral. The former has known a profound and extensive use in perfumery, despite its resistance to natural extraction methods which yield a very miniscule amount of no great significance. Apart from soliflores (fragrances focusing on highlighting the beauty of one kind of flower), the lily of the valley accord has been adequately used in classical fragrances as a catalyst to “open up” and freshen the bouquet of the other floral essences in the heart, much like we allow fresh air to come in contact with an uncorked red wine to let it “breathe” and bring out its best. The effect is wonderfully put to use in Chanel No.19, Guerlain’s Chamade and Jean Patou’s L’Heure Attendue. Its lack of sweetness is also an important aspect in the creation of masculine fragrances: witness Chavelier d’Orsay, Équipage by Hermès, Insensé by Givenchy and Riverside Drive by Bond no.9 to name but a few.

The reconstitutions of lily of the valley note are based on either combinations of natural essences (usually citrus with jasmine, orange blossom or rose and green notes such as vetiver) or more commonly on synthetics. The classical ingredient is hydroxycitronellal, as well as the patended Lyral and Lilial, all coming under the spotlight of the latest restrictions on perfumery materials {you can read all about them here}. Lilial has a cyclamen facet to it, used in good effect in Paco Rabanne pour Homme. Super Muguet is another lily of the valley synthetic which surfaces in Marc Jacobs for men, as a clean facet under the figs. Kovanol is very close to hydroxicitronellal, which is interesting to note. Restricted by IFRA is also the newest Majantol {2,2-Dimethyl-3-(3-methylphenyl)-propanol}, while Muguesia or Mayol are also used to give this green floral smell of muguet. The name Mayol has an interesting background: it’s a nod to comedy singer Félix Mayol who put a boutonnière of the muguets he had been offered by his girlfriend Jenny Crook instead of his usual camelia on the 1st of May of 1895 before going out to sing!
Phenylethyl alcohol and benzyl acetate (the former rosier, the latter jasminer) as well as dimethylbenzenepropanol also contribute in the creation of bases which are used to render lily of the valley notes. It all depends on which impression the perfumer wishes to convey!
The clean, almost soapy nuances of lily of the valley has been traditionally exploited in soaps, which is why all too often lily of the valley as a fragrance note reads as “soapy” in your perfume. It’s also why it’s terribly difficult to render a convincing lily of the valley fine fragrance that does not evoke functional cleaning products, due to the exagerrated use they make of this aroma in that sector of the industry.

Iconic Lily of the Valley fragrances 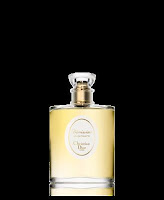 The definitive lily of the valley fragrance used to be the masterful Diorissimo (1955) by trismegistus Edmond Roudnitska who is said to have planted a bed of them in his garden, so as to study the smell attentively and to evoke the indefinable atmosphere of spring. Lily of the valley used to be the lucky charm of Christian Dior himself, who always sew a twig into the hem of his creations to bring them luck. The juxtaposition of virginal, celestial greenness in the lily-of-the-valley crystal tones of Diorissimo with only a hint at improper smells through the deep, warmly powdery aspect of civet and indolic jasmine in the dry-down is nothing short of magical. Alas, the latest formulation of Diorissimo has taken away that animalic warmth, leaving it with only the clean facet.
Roudnitska himself however had been quite appreciative of the pure and delicate innocence of Muguet des Bois (Muguets of the Woods) by Coty (1942). Guerlain’s seasonal limited edition of Muguet is a rich, sweeter rendition that is partly inspired by the original Muguet of 1906, while Le Muguet by Annick Goutal (2001) is an ethereal and sharper interpretation, quite true to the blossom, if only rather fleeting in Eau de Toilette (alas the only offering). Début by parfums DelRae is an intensely lovely and sylphid-like lily of the valley composition by Michel Roudnitska, which shines like ivory pearls on a long smooth neck. For those who prefer a soft and creamy treatment of the note, I suggest they try Muguet de Bonheur by Caron (1952).

Fragrances with prominent Lily of the Valley notes (in alphabetical order, click links for reviews):