He locked the door behind him and came over and sat on her bed and put one hand firmly on the little hill that was her left breast. "Now listen, Tracy" he began, meaning to ask her at least one or two questions, find out something about this wonderful girl who did hysterical things like gambling without the money to meet her debts, driving like a potential suicide, hinting that she had had enough of life. But the girl reached up a swift hand that smelt of Guerlain's Ode and put it across his lips. "I said 'no conversation'. Take off those clothes. Make love to me. You are handsome and strong. I want to remember what it can be like. Do anything you like. And tell me what you like and what you would like from me. Be rough with me. Treat me like the lowest whore in creation. Forget everything else. No questions. Take me.” 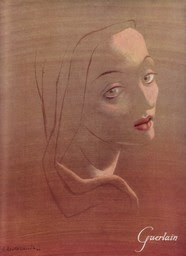 If the above piece of prose is nudging you into an abyss of sensual surrender (and a little sideways feministic complaining as well), it's all because Ian Flemming knew a thing or two about perfumes and their secret language. Coming aboard chapter 4 in his novela "On Her Majesty's Secret Service", Ode is making an appearence as the feminine wile that seals the sentimental trap for James Bond: the one time in the old series when he falls in love.

Much like Liù is Guerlain's warmer interpretation of the aldehydic vision of Chanel's No.5, Ode is the Reconquista of the floral territory of classical luxury held by Patou's Joy. Yet it is also taking a page off the book of Arpège by Lanvin, another aldehydic floral, merging the two into an abstract creation that smells like a woman; like a woman very much of the era of its creation, I should clarify.
Jacques Guerlain created Ode, his last perfume, in 1955 with the assistance of his grandson Jean-Paul (aged 18 years at the time), heir to the family vault of formulae, passing the baton to catapult the house into the modern times: it was only a few years later that Jean Paul would write his own history with the fresh tonic Vétiver and the delicate caress of Chant d'Arômes.
Putting on Ode in extrait de parfum and contemplaing its time-frame however never fails to make me wonder how those milliners (Chanel began as one) and dressmakers played such a major part in the consciousness of even old and traditional perfumery houses such as Guerlain! And also how the platonic ~rather than the literal~ idea of flowers as transfigured into a feminine fragrance stood as the semiotics of how a woman was supposed to smell like in those times. After the roaring 1920s and 1930s with their strange and brave revolutions such as Guerlain's own Djedi , Mitsouko or Shalimar , the emancipated dukey Tabac Blond by Caron or Cuir de Russie by Chanel and the shocking evocations of Piguet's Bandit during the war, the mould would slowly fall back into traditional femininity as women eased their way out of the laboring workforce and into the homely caregivers or obedient secretaries. In 1955 a floral perfume should be more than the summation of its parts (Chanel's dictum that no woman wanted to smell like a rose bed had caught on firmly) yet also less of the animalics and sophisticated bombastics of the garçonnes' era.

Ode stands as a luminous floral in the Guerlain galaxy focusing on the luxurious rose and jasmine accord that is the pillar of classical French perfumery, yet it infuses it with gentle musk and a bit of the Guerlain vanilla which gives a warm, round feel. The rose is slightly more accentuated than jasmine to my sensibility, but perhaps this has to do with my desire to immerse myself in the indolic aroma of jasmine that makes me experience this as a void. Despite the passionate prose by Ian Flemming, Ode by Guerlain is subdued and elegant through an overture of aldehydes that nod to Arpège and a creamy, slightly powdery base of delicate iris and musks. Toned down compared to both its antecedants, it is gentle and retro feminine and it makes me feel that it wouldn't be hugely popular with today's sensibilities. In extrait de parfum it stays close to the skin as an invitation for further evaluation. 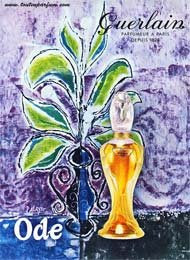 The original bottle of Ode, much like Liù, was inspired by the imposing American skyscrapers. It featured a curvilinear flacon design, partly frosted, and it was crowned with a rosebud stopper. The flacon was manufatured by both Bacarrat and Pochet et du Courval (the different manufacturer can be traced via the acid stamps on the bottom of the bottles) at different times. The design proved to be so successful that it hosted Vol de Nuit, Shalimar and Mitsouko as well in the early and mid 1950s.

Although Ode should have already been the next installment in the legacy collection Il était une fois after Véga in 2005 and Sous le Vent in 2006, no news of an upcoming launch have been issued more than a year after the supposed launch (summer of 2007) and the collection remains thus mangled. Along with Kadine (1911) and Cachet Jaune (1937) they were re-issued in 2005 for demonstration purposes for the celebration of the Paris flagship store renovation, where you can catch a whiff of those long-defunct perfumes being vaporised in the air inside the infamous "microwave oven" contraptions. Let us hope that Ode will join the legacy collection at some point and not remain a memory of things irrevocably past.