"Do you come from Heaven or rise from the abyss, Beauty?
Your gaze, divine and infernal,
Pours out confusedly benevolence and crime,
And one may for that, compare you to wine ...
From God or Satan, who cares? Angel or Siren,
Who cares, if you make— fay with the velvet eyes,

Rhythm, perfume, glimmer; my one and only queen!
The world less hideous, the minutes less leaden?"
~Hymn to Beauty, Charles Baudelaire

In 1930, Coco Chanel had a dream: she envisioned the perfect, most beautiful woody perfume that was baroque in feeling, yet bore no frills. The result, Sycomore, a 'woody scent with balsamic notes' composed by her Russian perfumer Ernest Beaux, was not appreciated in its time and soon disappeared. Just shy of 80 years in the making, Jacques Polge and Christopher Sheldrake, resident noses at Chanel, recomposed the woody vision of mademoiselle Coco and the finished fragrance forms part of Les Exclusifs ~Chanel's prestige line. The two however do not bear any similarity: The vintage Sycomore had "a distinct tobacco-violet note and all the other elements (few) built to enhance this idea" according to Octavian Coifan while in comparison the new version is very much centered around true vetiver; and a smokey one at that.
In many ways it is a departure from the other iris-ladden Les Exclusifs which affirm their Chanel pedigree by use of costly raw materials evoking segments of previous successes of the brand. Sycomore does not. 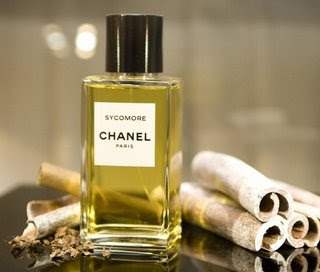 Sycomore instead emphasizes its aristocratic dryness of humble origin with a tangy grapefruit opening and subtly cooling, clean muguet notes that complement the Haitian vetiver variety, also used in Guerlain Vétiver, so well. Almost simultaneously it allows soft impressions of a warm incense cloud slowly setting upon evergreen needles and rooty dirt (a la Route de Vétiver by Maître Parfumeur et Gantier) to uplift you into a wistful and introspective contemplation of life and mortality. And if you lower your head and pay attention to its murmur, a resinous, only marginally sweet touch of the licorice note that naturally arises in several distillations of the material itself, slightly reminiscent of Dior's Eau Noire drydown, vibrates at a low frequency, along with woodfire smoke.

Officially marketed as feminine for women who do not like flowery compositions, yet cunningly poised between the two sexes, it has an hermaphrodite side that whispers of something mysteriously chic, chastetly beautiful and utterly unattainable; like Björn Andrésen, the youth Tadzio in Luchino Visconti's 1971 "Death in Venice" (the film adaptation of Thomas Mann's masterful novel).
His remarkable androgynous beauty prompted feminist Germaine Greer to use a photograph of Andrésen on the cover of her book "The Beautiful Boy" (2003). She would have approved of a scent strip of Sycomore tucked in there too.

The musical score is Gustav Mahler's "Adagietto" from his 5th Symphony.

Sycomore is available at $190 for 200ml Eau de Toilette exclusively at Chanel boutiques. Considering it uncharacteristically lasts quite well, it is an investement.