What word springs to mind when you think of Scotland? Mountains? Whisky? Rain…?! 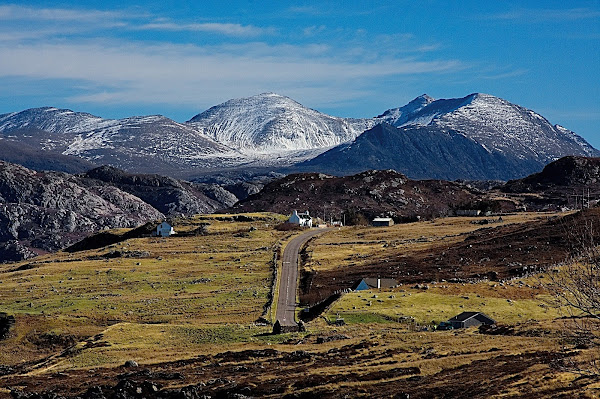 Imogen Russon Taylor, founder and owner of Scotland’s first luxury perfume house, Kingdom Scotland, reveals that the word which springs to most people’s minds is, in fact; magical. On a sunny Autumn day, I met up with Imogen on the banks of Edinburgh’s Water of Leith to ask what inspired her to launch Kingdom Scotland.

My first question though, was: ‘What’s that perfume you’re wearing? It’s lovely - I smell vetiver!’ For me, vetiver (from the roots of vetiver grass – green, lemony, smoky and earthy) recalls the time I stayed in a remote cottage in the Scottish Highlands – a log fire, the scent of vetiver incense, eating a bowl of fresh-grown vegetables from the garden outside, with the ancient forest of soft green mosses and Scots Pine beyond. 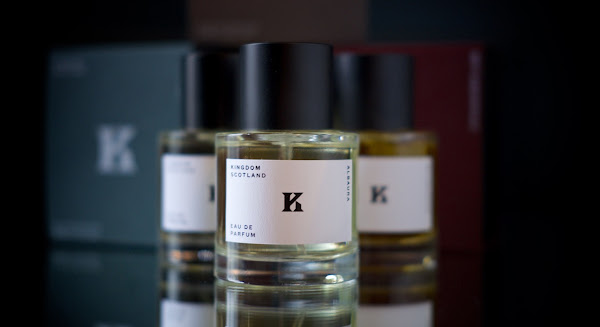 The scent I’d detected from Imogen was Portal - described by Kingdom Scotland as: A transporting herbaceous and woody scent – a gateway to the ancient Caledonian forests of Scotland. Invitingly fresh and outdoor – an escape to a sylvan wonderland. With top notes of herbs, green florals and a base of vetiver and Scots Pine, no wonder I was transported! Vetiver was most detectable to my nose, it being one of my favourite notes, but, as with all perfumes in the Kingdom series, Portal is complex, abstract – a style of perfume composition associated in particular with classic French perfumery.

It comes as no surprise therefore, that Imogen’s heritage is part French as well as Scottish. Her Grandmother was a model in the 1950’s and owned a dress boutique called ‘the Gown Shop’. She described the formative experience of watching female family members dressing and perfuming themselves – the impact it had on her understanding of perfume – how both the dramatic and the subtle come into play when creating a mood, or expressing personality. 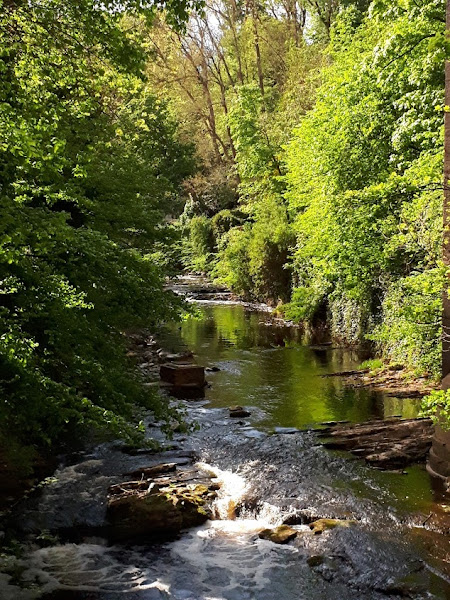 While working on brand marketing some years ago, with some of Scotland’s leading whisky brands (including Macallan, Famous Grouse and Highland Park) Imogen trained in the skills of ‘nosing’ - the art of recognising and memorising the notes and bouquet of high quality malt whiskies.

The legacy of that experience is reflected in Metamorphic, described on the Kingdom Scotland website as: a perfume inspired by metamorphic rock that is spectacularly woven into the landscape … a reference to our Founder’s love of Islay Malt whisky with a smouldering aspect that is softened with the heart of dark rose. Complex, rich, with an intense metamorphosis on the skin. Scotland has been described as ‘a geologist’s dream’, with rocks dating from among the oldest on earth – it’s a subject close to Imogen’s heart as her first university degree was in geology. Metamorphic - inspired by a landscape that has changed form radically over millennia, with the scent of whisky, leather, minerals and rose - draws together threads of inspiration in a way that truly ‘speaks’ to me of my experience of Scotland. 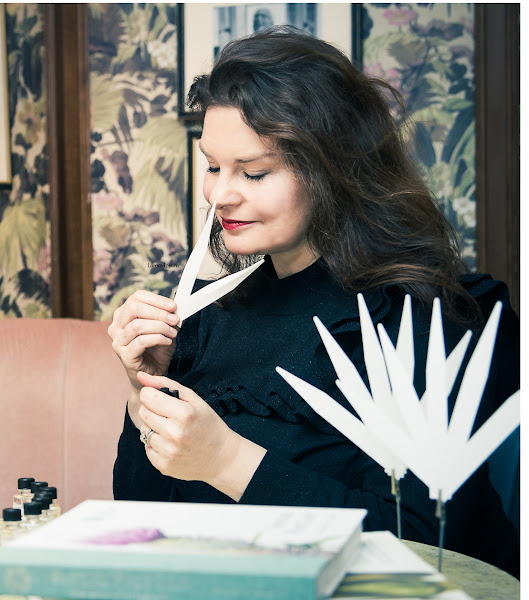 I find Portal and Metamorphic visceral perfumes – they evoke my own experiences of forests and log fires and more – they reflect my fascination (as a painter by profession) of capturing Scotland’s landscape in paint.

In contrast, Albaura takes inspiration from the personality and life of Scottish botanist Isobel Wylie Hutchison. Born in 1889, Hutchison was a pioneer; one of the first significant female botanists, she rejected marriage and domesticity to travel to the Arctic. Imogen describes Albaura as; “A tribute to Isobel Wylie Hutchison, her work and her life. She travelled alone generally, so I wanted the opening to be almost like petals on coastal ice, glaciers, a coldness to it … “ Albaura opens on skin with a white coolness that becomes gradually softer, more green – there’s a touch of orris root (obtained from the roots of iris) which evokes the sense of powdered snow. Imogen explains that herbals and juniper add to its cool greenness too. To my mind this adds a cerebral or witty touch to the perfume – juniper berries and coolness equals - gin and tonic! Iris, or orris root – used also in powders and makeup – light powderiness. These scent associations are usually understood at the edge of our consciousness, unless you’ve trained in perfumery or really focus on scent associations. Imogen continued her fascination with botany (Albaura was created in association with the Royal Botanic Gardens, Edinburgh) in the making of her most recent perfume release, Botanica.

The Botanic Gardens contacted Imogen to say; “We love doing this, it’s our 350th anniversary coming up and would you consider making a perfume to celebrate 350 years?’ She describes it as; “a tough brief, because you don’t want something to be linear, or one dimensional. This was basically about biodiversity in a perfume and all the stories of healing, the physic garden, right through to conservation. I call it Botanical maximalism ; every time you smell it, you’ll smell something else”. 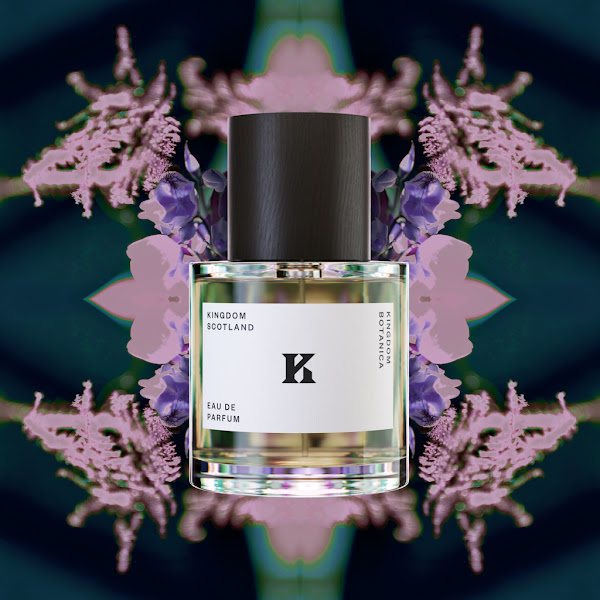 Botanica opens with an immediate complexity, the mood is warm and sensual. Imogen describes it as mostly floral, featuring rich plum blossom from Asia in particular but, she explains, it also features exotic woods and incense. My impressions overall are of warmth, a delicious subtle sweetness and depth – it strikes me as a perfume that would have much appeal for women in particular. I find it almost gourmand (i.e. verging on foodie) as I’m reminded somehow of fine French patisserie – spiced apricot tart perhaps! It’s one of those perfumes in which each wearer will experience a unique aspect - its sillage appealed very much to my partner too!

My conversation with Imogen touched on her many interests - geology, clothes-design, whisky, botany, not to mention marketing luxury brands – all apparently disparate threads, woven together to create perfume. She describes her search for a high quality perfumer (or ‘nose’ as the profession is described in the business) who’d work with her collaboratively and creatively, and her approach to creating a perfume house; “I had the idea for the business eight years ago and set it up four years ago and then spent two years in research before I even launched a product, so it took a long time. I suppose I wanted to be proud of it, so it was true”. 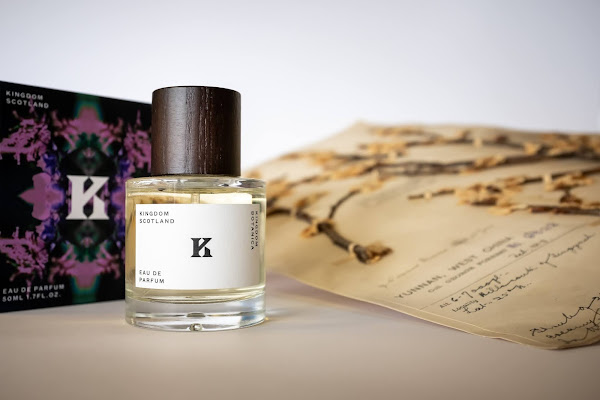 Those two years in research included a deep dive into Scotland’s archives to find perfume houses that had existed in Scotland’s past. As it turned out – none!

Surprisingly, for a country that’s often associated with inventions, Kingdom Scotland is its first luxury perfume house. She explains; “In some ways I was disappointed because I thought I might be able to bring something back to life, but then I thought ‘well actually, this is the opportunity’ and I can start as I thought perhaps a brand should have been, if it were there”. I can see dedication to quality in all aspects of Kingdom Scotland. I feel that if Scotland is to have a perfume house, I want it to speak of glacier-sculpted landscape and flora, mysterious forests - and of course - the pleasure of whisky by the fire on a dreich day! Right now as I type, with a November chill in the air, rain lashing the windows and a view of the last autumn leaves swirling in the wind outside, I’m cuddling up with Metamorphic’s tingling fireside warmth. Magical!

To find out more or to order perfumes from Kingdom Scotland, visit the website here: https://www.kingdomscotland.com/