At the heart of Chanel No.5 marketing lies the lore of prized perfumery materials. Fragrant jasmine from Grasse, real ambergris as precious as gold, the choisest foundations on which to build a masterpiece... It can be argued that the significance -and indeed definition- of a masterpiece doesn't rely on the materials it is made of necessarily, but on the way it is made and the intellectual/emotional message it conveys. Yet, as with anything, a closer examination of any legend brings on its own interesting revelations. 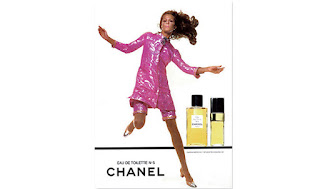 “It’s illegal to possess ambergris in any form, for any reason,” says Michael Payne at the National Marine Fisheries Service, a U.S. federal agency in Silver Spring, Md., regarding the Endangered Species Act of 1973. Even picking up a stray lump from the beach is prohibited, according to Payne. However, there isn’t a lot of precedent for prosecution. “I know we’ve issued warning letters,” he says. “It was probably a very long time ago. It hasn’t been since 1990.” European companies don't have such a risk-taking hindrance in the way, so the lore  continues  unfazed.

Tilar Mazzeo, the author of The Secret of Chanel No. 5: The Intimate History of the World’s Most Famous Perfume, says that “historically Chanel No. 5 certainly did use ambergris.” The original formula leaked in the 1930s, she says, and “the copies I have seen include ambergris or ambrein—the essential scent element of ambergris—as an ingredient.” Not so, says Philip Kraft, a German chemist who creates scents for Givaudan (GIVN:VX), a Swiss manufacturer of fragrances. “There never was any ambergris in Chanel No. 5,” he says. “Not in the formula from 1921, nor in the one of today.” A representative from Chanel declined to comment. [source]

Jasmine is also a semi-accurate affair at best in what concerns the communication of Chanel No.5. You will often hear brandished the term "French jasmine" as a denoting of superior quality. Grasse after all has been made famous thanks to its natural products, jasmine out of which is most notorious. The cultivation of the jasminum grandiflorum variety came from the Arab trade route. The Grasse jasmine is sweeter than most and more refined than the bulk of commercial jasmine essence that comes from Egypt (more than 3/4 of the total production comes from this area), Morocco and India (where jasminum sambac is the traditional product). Due to extreme costs to obtain this precious extract only a few companies have been able to use Grasse jasmine in their perfumes. This traditionally included Chanel (who use Grasse jasmine in their extrait de parfum of No.5 and the rest of their jasmine-listing extrait de parfum fragrances) and who have bought their own fields of jasmine and tuberose in the region of Grasse, France since a long while. French jasmine is at the heart of all marketing stories of Chanel. Yet the perfumery restrictions imposed (and condoned by many major companies, Chanel included, in the RIFM organisation) in 2009 specify such a low ratio of jasmine grandiflorum allowed (0.7% under the 43rd amendment of IFRA) that it must mean we're being had on...
*Share with link: Friday, October 26, 2012