Impossible Iris is like those beautiful raven-haired girls with big, sincere eyes that seem to engulf you and creamy, gorgeous skin that shines with the sheen of mother-of-pearl (like Liv Tyler or Anne Hathaway to bring modern examples); there's both a wholesome appeal (in the sense of "non-plastic") and a retro elegance to it all (in the sense their beauty ideal defies tanned, scrubbed, peroxided "nowness"). 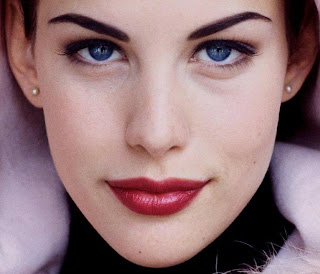 Iris can be like that, when excellent, with the added artistic bonus of a delectable melancholia that negates all the "shiny happy people" silliness that is pack and parcel of the "plastic" and "nowness" mantra. But iris can also be a fragrance note that can render itself rather too prissy and difficult for its own good; too many times it can be too starchy and earthy-raw (smelling like boiled carrots or turnips) or it can become too dusty or too creepy cold like the tomb (and there's no better reference than the chilly Iris Silver Mist by Lutens if you're after that sort of effect). Perhaps this is why the easiest, most popular iris on the market is Infusion d'Iris by Prada, a smashing best-seller and a modern classic; no guesswork there, the fragrance isn't an iris per se as the name would suggest, it's a sweet woody incense built on benzoin! Other times iris can be tilted into violet-heavy territory (with whom iris shares ionones, molecules with a powdery, dirt/earth feel) and land into Parfums Lingerie, a totally different sort of aesthetic effect, makeup reminiscent rather than upturned garden dirt.

Personally, I like irises, especially woody ones, such as Bois d'Iris by The Different Company and the stupendous Chanel No.19, so testing Impossible Iris wasn't a challenge by any means. Still, it exceeded expectations and has found itself firmly in my perfume rotation which is something when you take into account the jadedness of a seasoned collector.

Ramón Monegal went neither way between chilly or earthy for Impossible Iris, opting for an iris fragrance that is recognizably iris, yet projects with a delicate, mimosa-laced/heather hint of sweetness under the metallic opening; clean, elegant, slightly soapy fresh and very appealing! It's an iris to put you in a good mood, for a change, with subtle floralcy and woodiness in equal measure, if that was possible, with all the prerequisites to make you fall in love with it just as easily as imagining Iris as a girl's name. It stands as the perfect metallic/woody iris to encapsulate and recapitulate all we have come to expect from a prime iris fragrance; there is the delicate, shy beginning with the cool touch, then comes the touch of wooly mimosa with its hint of warmth to smile into the proceedings, while the quiet, bookish woody tonality of the aftermath with its pencil shavings nuance is enough to consolidate it among the richer in nuance irises.

Ramón Monegal has that rare talent: he has taken "difficult" notes (iris, leather as in Mon Cuir, patchouli, as in Mon Patchouly) and rendered editions that transcend the rougher aspects into smoothing them into compliance, making them melt with pleasure under the sprayer and onto the skin...
Gaia, The Non Blonde, found it more floral in the beginning than I did, but we both loved it all the same.

I was impressed with the sillage (it's a perceptible iris that will get you comments, the positive kind) and with its tenacity and I find that though delicate and graceful, it can also be worn by men easily, thanks to its woody background and its slight tinge of fruitiness that adds just enough tart elements in the formula.

Impossible Iris is available as Eau de Parfum in a beautiful inkwell bottle of 50ml at Luckyscent.

picture of Liv Tyler via rsmccain.blogspot.com