The upcoming Lancome fragrance, La Vie Est Belle (i.e. Life is Beautiful), is exactly the kind of perfume we dedicated perfumephiles love to kvetch about without any grave reason, come to think of it: It won't knock your Spanx off, sure; it's a "pretty" smell for pretty ladies (as evidenced by the face fronted it, the original Pretty Woman) but it's not a genuinely bad release all the same, just derivative. It suffers from the major problem of mainstream perfumery: a sense of sameness, a sort of deja vu, when what we yearn for is earth-shattering uniqueness, Heathcliff boldness and passion, springboards for heated discussion with a slice of brie in one hand and a good goblet of Laphroaig on the other while Mahler's 3rd blasts out of the speakers.
If you're that sort of person you won't be wowed by La Vie Est Belle. If on the other hand you just seek a wearable, non completely teeny-bopper fruity scent to get you through the day (and night) then the newest Lancome release isn't the worst to come out on counters for a while; nor is it the best, worse luck... 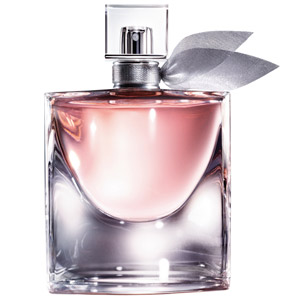 To cut a long story short: La Vie Est Belle an iris "gourmand" with patchouli. Just how many irises, gourmands and patchoulis are there on the market currently? Do I hear you say hundreds? I thought so! And yet, this fragrance is pretty well-executed within the genre, if sweet and over-tenacious. It's really a floriental for the 30-50 age group of women who want something contemporary that wouldn't have their teeth fall off at the same time. Lancôme after all has never ditched their more "mature" outlook (Tresor Midnight Rose non withstanding) and the accompanying image the way Dior has, as I was discussing with one of my online friends. In that context, the fragrance succeeds in its intended demographic, all caveat emptors in place.

This gourmand yet rather delicate composition was developed by famous perfumers Olivier Polge, Dominique Ropion and Anne Flipo, all known for their talent and technical skill. The final formula is claimed to be the result achieved after 3 years of testing and 5000 versions including precious ingredients (Iris Pallida concrete, Jasmine sambac absolute, orange blossom absolute, and patchouli essence; we can take this with a grain of salt or not). When you're hearing things like that, you know you have reason to get worried.
Iris is supposedly the key ingredient of the perfume, surrounded by orange blossoms and jasmine in the heart. The iris isn't really perceptible as such to my nose, though, I have to say: that carrot-rooty often metallic note we associate with iris fragrances is very subtle and floats in the background as a murmur rather than a clear command. The composition’s opening provides fruity flavors of black currant and pear, those can be felt, while the base is warm, gourmand and powdery due to almond-like accords of tonka bean (high in coumarin), praline (shades of Angel, especially coupled with the next two ingredients), patchouli and vanilla.

The recognizable reference in La Vie Est Belle comprise a hint of Delices de Cartier (instead of cherry, the fruity nuance is orange-toned but in a clean, fresh and pleasant way) and Flowerbomb's fruity-patchouli sweetness rising from the core. It's somehow airier, like a gourmand done in devore velvet rather than heavy damask. It also vaguely reminds me of Hanae Mori #4. Of course all these facts point to the theory that if you own any of the above, there's not much point in owing La Vie est Belle as well. That's for you and your Visa to decide.

The lasting power and projection of La Vie Est Belle, available as eau de Parfum, are both very very good, a technically able fragrance, and though I wouldn't be too displeased to be in the company of the woman wearing it, I wouldn't buy a full bottle for myself all the same. 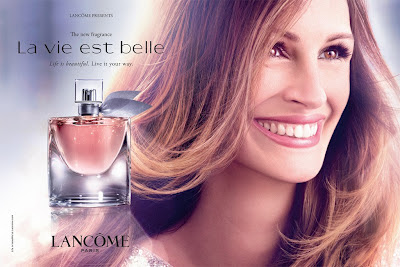 La Vie Est Belle is the newest Lancome fragrance, available on the market from autumn 2012 in major department stores. The concept of this fragrance is centered on real beauty in small things, freedom from conventions and the wisdom to go after one's heart.
The (beautiful) flacon is a redesigned version of a Lancome bottle from 1949 from the brand's archives. Actress Julia Roberts is the face of the campaign, shot by director Tarsem Singh.

NB: I shared a sample with a friend who works in the press and got a preview herself.
*Share with link: Monday, August 06, 2012