Coca-Cola Notes in Perfumes: The Tingling, Sweet, Spicy Side of Fun

Whenever you hear "Have a Coke," you hear the voice of America. Passport to refreshment. Happy moment of hospitality. Coke means Coca-Cola. (1945) Refreshment the whole world prefers. The cold, crisp taste of Coke.(1958) The favorite drink for ladies when thirsty, weary, and despondent. Good all the way down. Flows from every fountain. Sold in bottles. (1905)
~From Coke advertising slogans

Coca Cola and the cola-type soft drinks similar in flavor (Pepsi being the other giant, utilizing a slightly different recipe) create their own little scent universe. Sometimes, the association with the flavor is so very strong that perfume lovers seem to "catch" a cola note in their perfumes! 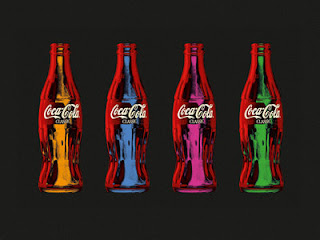 In fact Donna Karan advertises its DKNY Delicious Candy Apples Ripe Rasberry limited edition as having a base redolent of coca-cola notes! Grabazzi by Gendarme is another one. But there are other fragrances, which their makers wouldn't think of promoting as reminiscing the popular soft drink: Lauder's Youth Dew and the flanker Youth Dew Amber Nude most definately conjure the aftertaste of a delicious can of Coca Cola. Is it any accident they're more American than the statue of Liberty? America loves Coca Cola and I can well see why!
The French are not immune either: Spray a spritz of classic YSL Opium spicy oriental perfume (in the Eau de toilette concentration especially) and you distinctly find among the spicy bouquet the familiar cinnamon-orange goodness of Coke. Parfumeur niche release Mon Numero 10 has a drydown redolent of the famous soda. Dior's Dolce Vita hints at it, having this sweet, thick-ish undercurrent to differentiate it from Feminite du Bois (Shiseido) from whence it sprang, Athena-like from the leg of Zeus—or perfumer Pierre Bourdon's in this case.  Musc Ravageur by Maurice Roucel for niche brand Editions de Parfums Frederic Malle also boasts the spicy, dry and tonic vibrancy of coca cola before segueing into something softer, more paw-massaged and sexily alluring. 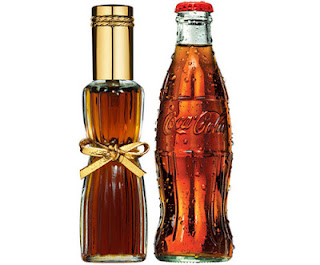 The secret lies in the actual formula of the drink, not the perfumes themselves. In reality, the popular soft drink is comprised of much more "perfume notes" than we thought of. Apart from carbonated water, sugars, caffeine, caramel and phosphoric acid, it boasts the following natural flavorings: lime, lemon, orange, coriander (which has a lightly orangey scent), neroli (coming from the steam distillation of orange blossoms), cinnamon, nutmeg and vanilla. Too many to remember? The basic flavor in Coca Cola and competing cola drinks comes mainly from vanilla and cinnamon, though Pepsi-cola boasts more lime than most (and therefore the question of whether one prefers Coke or Pepsi attains an important level of aesthetic preferences in fragrance consulting tests). 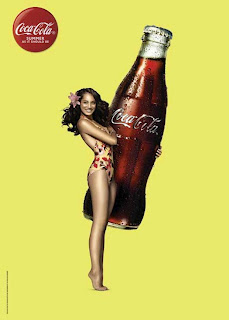 Naturally all of the above are long-time notes in perfumes, especially in Oriental blends and the classic hesperidic-spicy-sweet compositions. The association therefore with certain perfumes is totally logical. In fact, the recent discovery of a Coca Cola notebook from the late 1970s with the handwritten list of ingredients has prompted queries as to how the company needs to come out with a Coca-Cola fragrance. It's a well-known flavor in Lip Smackers lip balms, after all....

A few other scents that have cola aspects to them:
Idole de Lubin where the cola note pairs with rum.
Escada Magnetism for Men: Has the sweeter, thicker smell of a vanilla coke with added cherry, pepper, saffron and musk notes.
Dinner by Bobo is another one, as is Nanadebarry Classic Pink. Penhaligon's Malabah has the piquant opening of a fizzy cola. L'Aromarine made an Eau de Toilette and parfum which were redolent of the scent of Coke.

Have you experienced other fragrances where the scent of Coke (or cola in general) is perceived?
Let us know in the comments.


pic of coke and youthdew via Fragrantica, design and retro ad pics via Google
*Share with link: Thursday, July 19, 2012