Among the most popular and beloved notes in perfumes, heliotrope evokes images of goose down comfort, almondy yumminess, fluffiness and powdery goodness. A pliable note, despite its characteristic odor profile, it can twist slightly here or there. Coupled with violets and iris it gains on intensity reminiscent of retro talcum powder; embraced by bitter almond, vanilla or frangipani, it gains on a mouth-watering quality that is delectable, like a billowy dessert you can't resist. A high pitched and curiously deep, at the same time, smell, this fascinating butterfly-attracting plant is but the introduction to a delightful and ubiquitous perfumery material. 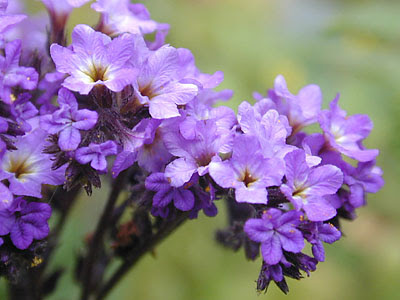 The name comes from the Greek words "Helios" (the sun) and "tropein" (turning), denoting the propensity for turning towards solar rays. Thus is explained the old English name "turnsole" (via the French "tournesol"). But apart from the plant and its delicious scent, it also refers to a purple-pink shade of color: the first use in that regard recorded in English comes from 1882.

Allied to puccoon, forget-me-not, and beggar's lice, the heliotrope comprises 100 kinds of varieties throughout the world's warmer zones. The fragrant garden heliotropes have sprung from two species only though: One is native to India, the other to Peru. The most usual heliotrope variety grown is heliotropium arborescens, like its name suggests resembling a small tree. Garden heliotrope has been a constant feature since at least the Victorian times, thanks to its delicious scent that oscillates between marzipan, vanilla, cherry pie and almond (hence its alternative name "cherry pie flower"). Indeed vanilla essential oil contains an amount of piperonal (heliotropin) in its composite, drawing the two close. It comes as no surprise that in mythology heliotrope is associated to the god Apollo, god of the sun and of the light. Hence the plant's connection to healing, prophetic dreams and exorcism. Apollo was the pre-eminent god of insight, bestowing his gift of prophecy to his acolytes and to the oracle of Delphi.

How Heliotrope Notes are Created in Perfumes

Both maceration and enfleurage (enrobing blossoms in clarified fat and then treating the fat with volatile solvents in order to catch the pure essence of the flower) yield heliotrope essence from heliotrope peruvianum, but it is neither sufficient nor totally accurate. A Japanese study from 1995 identified some odoriferous components as major components in the flowers, such as benzaldehyde, anisaldehyde and benzyl acetate, but these notes do not comprise the scent of the flowers adequately. On the contrary 3,4-          methylenedioxybenzaldehyde (heliotropin) does smell like heliotrope flowers, to an adequate degree, although the ingredient is not actually found in the blossoms' scent profile!

Therefore in perfume formulae, heliotrope is routinely replicated with heliotropin. Also known as piperonal or oil of sassafras, heliotropin derives from sassafras indeed (Sassafras albidum) and has been in wide demand for perfume and soaps for decades, especially for reasons of cost. The odour profile is powdery, like vanilla meringue with a helping of almond. The characteristic comforting scent of heliotrope has been proven to induce feelings of relaxation and comfort, a pampering atmosphere that finds itself very suited to languorous oriental fragrances and delicious "gourmands" (i.e. fragrances that recall culinary desserts by their scent). 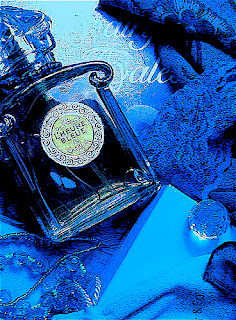 To get an education in heliotrope notes in perfumery one needs to look no further than classic Guerlain fragrances: From Guerlain's ultra rare Heliotrope extrait from 1890 to the ethereal Après L'Ondée (1908), which is mainly the pairing of warm heliotropin with cool and shy violets, and the troubling yet nostalgic L'heure Bleue (1912) ~which pairs the vanillic facet of heliotropin with anise on top, soft flowers in the heart (violet and carnation) and benzoin, iris and Tonka bean in the base to compliment the floral-oriental character~ Guerlain is the definitive house for heliotrope.

It was therefore a fitting homage that perfumer Jean Claude Ellena was reinterpreting Après L'Ondée in a modern context when he created L'Eau d'Hiver for Editions des Parfums Frederic Malle. The aim was to create a light fragrance, inspired by the structuring of eau de cologne but creating an eau chaud (hot water) than cooling sensation of a classic cologne. In L'Eau d'Hiver heliotropin is almost reduced to its pure state for this purpose: fluffy, like a late afternoon cloud, salmon golden. Etro's Heliotrope is yummy, innocent and hazy, enveloping you in its comfort like a goose down duvet; it's no accident it's considered the finest representation of the note, coupled with white flowers for a light, floral, airy touch. Heliotrope Blanc by L.T Piver is charmingly more complex with a slightly naughtier note. Crown Perfumery also lists a Heliotrope amidst their wares, more restrained and balanced in its sweetness. Molinard makes a classic, simple Heliotrope in their line Les Senteurs, which highlights raw materials one by one.

Several modern fragrances succumb to the charms of heliotrope, even when not featured in the name. In Kenzo Amour the heliotropin take is on the vanillic side, boosted by milky notes. In Love, Chloe we encounter the retro-smelling pairing of heliotropin and violet notes producing a powdery effect, reminiscent of makeup products. In Sicily by Dolce & Gabanna it provides the sweet anchoring of soapy aldehydes on top. In Lolita Lempicka eau de parfum heliotropin takes a anisic mantle and becomes a full-blown gourmand, while in the older Cacharel Loulou it's the comforting billowy background alongside tonka bean (with which it shares an almond and hay facet) and orris, producing a true floriental.

Currently heliotropin is under reduced ratio of use in perfumery, according to IFRA regulations, because safrols in food have been proven to be carcinogenic and hepatotoxic. Therefore concerns about the inhaled and skin-absorbed quantity from scented products have resulted in a preventory measure, rationing heliotropin to much lower ratios than before. This may be why your favourite fragrance with heliotrope might start smelling less deep and almondy in the coming months or getting discontinued altogether (as happened with Jour de Fête already). 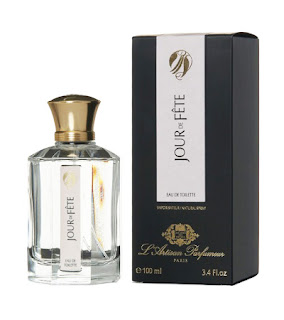