Seker Pare & Halva: Semolina Recipes to Usher the Cold in with Glee

The Arabian word ḥalwà is mellifluous enough, rolling off the tongue, to induce fantasies of a Sarayı drenched in moonlight. But learn that the Turkish Şekerpare means "the dancer's bellybutton" and let the imagination roll...Seker Pare are mouth-watering "cookies" if you will, made with fine semolina, baked until golden and then soaked in sweet syrup. The rounded curves of the pastry recall the plump and inviting belly of a belly dancer, the almond in the middle is...the belly button. But no, the pedestrian reality is that Şeker means sugar in Turkish and Pare is the Persian word for "piece". The fantasy version is so much more creative though, isn't it? 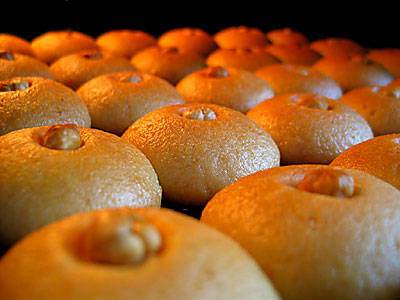 Devouring the popular Greek food magazine "Gastronomos" (literally arbitrer of the belly) I happened upon Ketty Koufonikola, owner of Cafe Avissinia (tfuno  navigate site!) in Athens' Monastiraki district, who presented a recipe for Şekerpare; here slightly adapted for home preparation. Kaiti's cooking combines the distinct cuisines of Constantinople/Istanbul and Northern Greece and this recipe is no exception.

As to halva (a popular dessert in both the Middle East, the Balkans and India) I need to point that in Greece we tend to eat both types of halva: the sticky semolina type and the crumbly sesame paste type (made with tahini), what the Jewish call "halvah", though made without the soapwort. But only one of these is made at home, the former, which accounts for the use of "grocer's halvah" appelation that the latter type still retains among the elders; a small quantity bought for the days of Lent ensured ample nutrition for the family. Interestingly, it's the sesame paste type that has been handed down through classical times, a no doubt proof of the fact that adiposity is the path to an ethnos's spiritual ruin. But I digress.
It is the semolina type halva, in various orchestrations/twists, which has marked many wintry afternoons of my childhood, as we stirred with big wooden spatulae, me and my mother, on pots with olive oil and golden dust, to make a yummy dessert which aromatized the whole house with its spicy bouquet. Its super-easy recipe to remember, short-handed into "1:2:3:4", as it calls for one unit of oil, two of semolina, three of sugar and four of water, is etched in my memory. 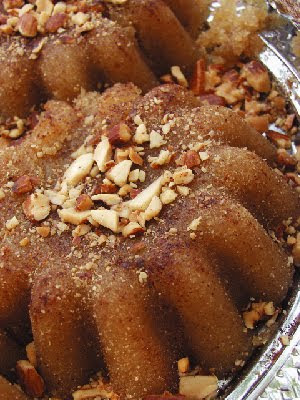 Put the oil and semolina in a big pot under slow fire on the stove and stir slowly until golden. Then add the raisins and pine nuts and keep on the stove for a little longer, till the pine nuts are golden too.

In the meantime, get the water to boil with the sugar and the aromatics in another pot. When it's bubbling vigorously, pour slowly into the pot with the semolina, stirring quickly (and carefully, it will bubble and might sprinkle you with hot material!) until thoroughly mixed.

Stir, stir and stir some more over the stove, until it doesn't stick to the pot and most water has seemingly evaporated. Pour over a deep bowl and let it sit covered with a thin napkin (it will still steam a bit and you want as much water evaporated as possible, as this will make it lighter on the stomach). You can then decorate with blanched almonds, shredded walnuts or raisins, sprinkle with grounded cinnamon and serve when cool.

2 1/2 cups flour
1 1/2 teaspoons baking powder
1/3 cup fine semolina
1/3 cup whole blanched almonds
for the syrup:
2 cups water
2 cups sugar
orange blossom water/hydrosol
lemon peel
2 vanilla pods
Pre-heat the oven to 190C/375F degrees. Whisk together the flour and baking powder in a bowl and set aside. Cream the butter and sugar together until fluffy. Add the eggs stirring carefully. Stir in the semolina and mix lightly. Add the flour and mix until the dough no longer sticks to the sides of the bowl (use a bit more flour if necessary).
Line a cookie sheet with parchment. Form the dough into balls the size of a chestnut and place on the parchment. Place a whole almond in the center of each ball, pushing it halfway in. Bake until light golden.
In the meantime, heat 2 cups of water with 2 cups of sugar, add  and bring to a boil. Add a 3-inch piece of lemon peel and two vanilla pods, opened & scraped, and let it simmer.
Remove the cookies from the oven, and immediately pour thehot syrup with a spoon on each and every one of them, allowing them to absorb the syrup. They should be spongy but not soggy.
Eat at room temperature and keep in an air-tight tin box.
pic of sekerpare via otikatsi-soula.blogspot.com, pic of halva via cretaolympias.gr
*Share with link: Monday, February 06, 2012