According to an article on The Financial Channel, that might be the case, especially in Tbilisi. But what's most important is that celebrity fragrances (including ancillary products such as bath & shower gels, body lotions and body mists) 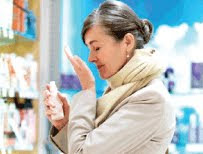 are popular with both affluent and lower-incomed customers! It's also noted that they're most popular among young people, though not exclusively.
Avril Lavigne, Naomi Campbell, Christina Aguilera and Antonio Banderas are named some of the most favourite celebrity brands for Georgians according to Khatia Shamugia, PR Manager of Ici Paris. These are often bought by mothers for their daughters (so mothers, beware what you introduce your impressionable offspring to!) or for their best friends.

“I am kind of a celebrity perfume lover,” said Nanu Abashidze, 19. “Of course I prefer to buy high class brands such as Chanel and Yves Saint Laurent but they are much more expensive. So I prefer to buy cheaper brands, and I am quite content with their smell. Avril Lavigne is one of my favourite celebrity cosmetic brands. I started using it recently and can’t give it up,” Abashidze said.
Taking this confession as a departure point into some personal speculation, it's worth wondering if the quality of high-end brands has gone down so downhill that there isn't really much to differentiate them from celebrity fragrances or lower-end products than their perceived prestige...