Miriam: The Fragrant Story Goes On & Interview with the Perfumer

"Three blocks away from our house on Evelyn Avenue, I take dance lessons,
at the Beauregard School of Ballet. Mother expects me to do my very best
and tells me so every Tuesday, Thursday, and Saturday on the way to the
studio. We’re often alone in the car, driving to some appointment or
engagement where something will be expected of me. I sit in the back seat,
staring at her hair. Not a strand out of place. The car smells of leather
upholstery, face powder, and the scent I think of as mother. I wonder
whether she feels insecure, being out in the world without her perfume
bottle. How can she make sure she applies enough to last her through the
day?
The bottle has no label. There might have been a ribbon--perhaps the
manufacturer tied something around the neck at one point. A box might
still exist, stored neatly on a shelf or in a drawer. When asked, mother says
she doesn’t know the name of the fragrance. It was a gift, she shrugs, as if
it fell out of the sky or simply appeared on her vanity one day. 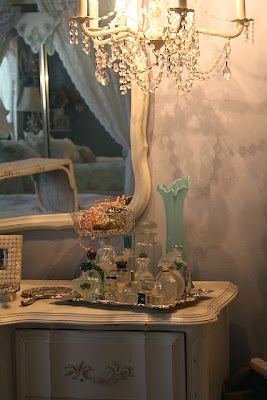 It’s warm in the car and the heat has an interesting effect on the perfume. Maybe mother is perspiring, though that’s almost inconceivable.

Sometimes, when the car is parked in the garage, I go out and sit in it, and because of the smell mother is there with me, only I don’t feel I’ve done something wrong, or not well enough. Safe from her disappointment, I look out the window at the contents of the garage and I tell myself that at
some point I can get in a car like this and drive away if I’d like to. I can stop worrying about letting mother down, without having to feel that I’ve abandoned her. I won’t be abandoning mother because of the smell of her perfume inside the car. I’ll be leaving but taking her with me. I sit in the
front seat, imagining where I might drive. I look through the windshield as if entertaining an audience.


At the dance school, as Mr. Beauregard rehearses with us, I can feel mother
watching from the bench which lines one of the mirrored walls of the
studio. There are twenty girls in my class--all of us the same age--but
mother’s gaze singles me out and I feel diminished. I feel she would rather
have almost any other girl in the class as her daughter. I stare at my
classmates suspiciously, resentful of their unstudied perfection. By the
time we return to our driveway, mother’s perfume is somewhat stale, and
makes me a little queasy. She tells me I will have to do better in class; otherwise
I’ll continue to embarrass myself."

Thus continues the quest of Miriam, the character in Women's Picture, which became Miriam Eau de Parfum, the fragrance by Tauer Perfumes.
For the occasion, Tauer replied to PerfumeShrine's questions below. Enjoy!
Elena Vosnaki: How did the idea to combine film and perfume launches come about?
Andy Tauer: Actually, it is all Brian’s initial idea. And, in a sense, it came at a very difficult moment for myself. It is actually more than just launching a film and a perfume together. Brian was looking for a partner, who would be interested to get inspired by women’s portraits that he captures on celluloid. These are women portraits like we know them from the forties and fifties, transported into our time. He contacted me one day out of the blue, asking me whether I would be interested to come up with perfumes that mirror his portraits. I came out of negotiations with an investment banker on building a brand and a perfume together and to be frank: I was so NOT interested in another project with another guy. But I tried to be nice, and wanted to read the script of the movie(s) and took it with me on my biking holiday. There, on my way with the bike from lake Geneva to the Mediterranean,  in the evenings, I read the script, again and again. After having seen the movie,  in a first version, I knew: I want to do these fragrant portraits for Brian. I knew by then, somehow, that I can blindly trust him. I proposed to him, however, that we should not fill the fragrances into Tauer flacons. It would not do justice to his brilliant idea and to the portraits. This is why we came up with Tableau de Parfums as brand: To make sure that it is not “just another tauer fragrance” but something different. And to make sure,  that perfume lovers see the connection. When I showed the fragrance(s) to my Italian importer, his first reaction was, without knowing the background: “but Andy, this is again different to what you have done so far. It is different. So different!”


EV: I read how the memory of your own mother come into the picture upon seeing Brian's vision. Is there a connection with Miriam EDP?

AT: Yes and no.
No in the sense that the fragrance Miriam is made for Miriam, the figure in the movie Miriam, played by Ann Magnuson, who is, by the way, absolutely wonderful. This scene where she sits in the meeting room ,with the toast in her hand. Oh my…! When I saw it the first time, I was sitting in there with her!
Thus, I created the fragrance, with Miriam in mind, with Ann Magnuson being Miriam, and with my memories in my mind. And there, there is the Yes. Yes, of course: Miriam’s mother is old and suffers from dementia. Miriam cares for her, and her mother’s perfume is a link into a past that is gone and far away. My mother passed from us three years ago. Too early. But it is not us deciding when we need to part. My mother and me were very close, connected by a bond that is still very strong, a friendship, love, and the routines of telephone calls, regular dinners together at our and her place. In the end, with her disease entering the final phase, my partner and myself cared as best as we could and invited her to our house for a few weeks, after her last treatment, knowing that we are counting weeks now. We talked a lot. About a almost everything.

To be frank: I cannot handle death properly. I do not find consolation outside the fact that we are all star dust and will return to the universe and become a star one day. When I watched Woman’s Picture, it triggered a lot of memories of my family and my mother and her role as fighter, trying to let us grow up and give us all we need without a father; trying to cope with a life that was not easy. Being a mother is not easy. I feel men cannot fully grasp the love a mother has to her child. It is the memory of this love that made me smile and sad at the same time when I watched Woman’s Picture. Miriam, Loretta and also, especially, Ingrid. So touching.


EV: Do you think there is a buying audience for an aldehydic floral beyond a dedicated fan base these days? (When was the last time you heard of an aldehydic promoted as such?)
AT: Ah, Elena! Of course there  is! Miriam is a wonderful floral, aldehydic, green, deep, rich, vintage, wonderful oldfashioned, chic, grand perfume. A true classic. And it is much more. It is a link into a world of other women, of portraits, of a story of our mothers and grandmothers. And then, even if is not attracting a large buying audience: I do not think in market share and bottle turn over when creating a fragrance. The fragrance must be the way it is. Anything else would not be honest!
EV: What was the challenge in Miriam EDP? Perched between modern and vintage? Technical stuff? Seeing the film character changing course slowly possibly? Something else?
AT: My challenge was to come up with a fragrance that is born in the forties of the last century, but created today: How to find an aesthetic language that bridges this gap! How to create a fragrance that conserves this vintage spirit but fits with Miriam who lives today. I hope I managed. Miriam is definitely vintage, or rather vintage-like.

Miriam Eau de Parfum will launch in October at ScentBar in Los Angeles.