Perfume Stories: A Worth Quintet

By popular request, a new feature is launching on Perfume Shrine today: Perfume Stories; tales of fragrant history and exaltation of the senses interweaving snippets of inspiration into popular & less known fragrances' lore, which charm and seduce with their own mystery. For this first instalment, we immerse ourselves in the trail left by the Parisian house of Worth. 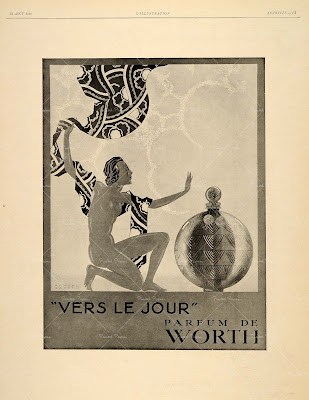 The house of Worth is invested in its own illustrious patina: Founded by an Englishman born in Lincolnshire, Charles Frederick Worth, it almost signlehandedly established couture upon opening quarters in Paris in 1858 in collaboration with Otto Bobergh, due to the lucky occasion of impressing Princess de Metternich, the wife of the newly appointed Austrain ambassador in Paris. She in turn impressed ~with her Worth-sewn dress costling only 300 francs!~ Empress Eugénie, the coquette and dazzling wife of Napoleon III at one of the three balls the royal couple gave at the Tuilleries Palace during the winter season of 1859. Thus is the story recounted:

"Eugénie had taken a liking to the young and vivacious Princess Metternich, and on that night when the empress noticed her dress (so the princess recounts in her memoirs) the following conversation took place: "May I ask you, Madam," she enquired, "who made you that dress, so marvellously elegant and simple?"


"An Englishman, Madam, a star who has arisen in the firmament of fashion," the Princess replied.
"And what is his name?"
"Worth."
"Well," concluded the Empress, "please ask him to come and see me at ten o'clock tomorrow morning."
“He was made, and I was lost," wrote Princess Metternich jokingly, "for from that moment there were no more dresses at 300 francs each."

As is the custom, high society copied the monarchs, when they saw that the couturier was open for business and the birth of modern fashion was afoot. In fact, the house is so much considered a rite of passage for young debutantes and older customers of the haute monde alike, that it is mentioned as a necessary stop-over amidst the protagonists' honeymoon trip to Europe in Edith Wharton's Age of Innocence. Worth eventually branched into London, Biarritz and Cannes, popular resorts for the rich. 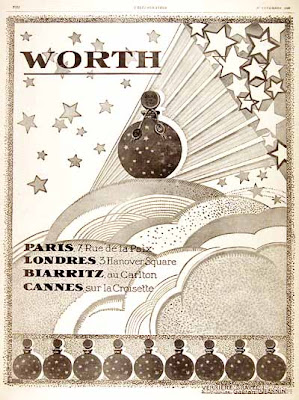 But despite perfumery making giant leaps with Guerlain and Houbigant in the throes of the 19th century, it was not until the founder of the Worth company died in 1885 and his grandsons (Jean Charles and Jacques Worth) took over, suceeding his sons, that they hired a high-calibre perfumer named Maurice Blanchet who worked on what would be a bewitching tale of fragrant romance.
Worth, under Jean Charles and Maurice Blanchet, released the five perfumes in a chronological sequence to tell a passionate story: Dans la Nuit (1925), Vers le Jour (1925), Sans Adieu (1929), Je Reviens (1932), Vers Toi (1934): "In the night...towards dawn...without saying goodbye...I return...towards you."

Apart from creating thus a mystical, subtle love confession simply via the names, Worth collaborated with René Lalique into creating memorable bottles for the fragrances: Dans la Nuit was encased in a blue boule bearing the stars of the nightime sky. Vers le Jour was on the contrary in bright, yellowing red glass like the dawn. Sans Adieu was in green, with a cone-head cap with cut-outs which makes an impression even today.

But what is even more romantic is how Je Reviens in particular became a pop symbol of a landmark in history: At the end of WWII, when American GIs were going back home, after being welcomed into the arms and hearts of European women (women who had known for a brief second -it seemed- a solace from the deprivations of war), this was the perfume they gifted them with; imparting that final goodbye with the promise (and the crushed reality) of an au revoir: "I will return".

The perfumes were relaunched in 1985, and apparently again in 2000 as a "Love Poem" edition of five 0.33oz/10ml sprayers (depicted) crediting the historical perfumer but given a necessary reformulation to comply with modern standards of ingredients control. For instance, Dans la Nuit started its history as a wistful romantic woody oriental, bearing common "signature" traits with the best-known Worth, Je Reviens, and L'Heure Bleue, but recent changes have cheapened the formula by amping the synthetic sandalwood and jasmine constituents giving it a whiff of plastic. Vers le Jour was totally transformed into a modern hissy fruity floral, while Sans Adieu bears the totally anachronistic for a 1920s creation overdosage of Calone (watery melon note) we tend to associate with 1990s scents. Je Reviens was copiously produced, so earlier bottles can still be found rather easily, but apart from the collectable minis, there are two other versions circulating of Je Reviens: The 3.4 oz/100ml Eau de Toilette (bottle with big black cap), which is screechy and weak, and the 1.7oz/50ml Eau de Parfum in the dark blue crennalated bottle which retains parts of the floral aldehydic character of the original. 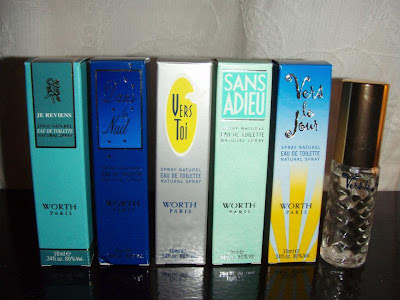 Still, the new "Love Poem" presentation is worth collecting for the charming story behind it, inspiring us to stack the bottles into confessing that untold passion again and again...
There is currently a 5-pack on sale on Ebay. (NB. Not affiliated).