"Sometimes he frets his instrument with the back of a kitchen knife or even a metal lipstick holder, giving it the clangy virility of the primitive country blues men".  This descriptor for Bob Dylan's style fits the newest Serge Lutens creation to a T: clangy, virile in a rugged way, disruptive, angry and unusual are all characteristics of Vitriol d'Oeillet (meaning vitriol of carnation); an uncharacteristic carnation fragrance which breaks the mould of old fashioned powdery florals of the start of the 20th century, offering a futurist angry woody floral. In Vitriol d'Oeillet Lutens alludes to carnation via intense, corosive pepper and lily and invites us to think of carnations of red, feisty under the intense sun of Provence, and at the same time of the London fog hiding a gentleman killer à la Jack the Ripper, who sports a carnation in his buttonhole.

There's something to be said about 19th century and its fixation with death & violence, a kind of violence beyond the funereal association so many people have with carnations. The ethereally romantic image of the era gets shattered when we read Honoré de Balzac for instance: Madame Cibot is a widow twice-over, when her husband Rémonencq accidentally consumes the chalice of vitriol he was intending for his wife (in Cousin Pons)...Oil of vitriol features in many a 19th novella, not just Balzac.
Two especially memorable scenes have the caustic sulphuric acid unceremoniously thrown on a face (the acid works by releasing acids from their salts, i.e.sulphides); namely in George Gissing's The Nether World (1889) and Robert Louis Stevenson's The Ebb-Tide (1894). Perhaps what inspired those writers into using vitriol in fiction scene stealers as an aussault (an aussault to injustice, poverty and degradation), as well as a metonym for realism (a late 19th century claim to the explosive!), is what inspired Lutens himself; a desire to break loose with preconceptions about how a carnation fragrance should be: pretty, prim, feminine, dainty? Vitriol d'Oeillet is nothing of the sort!
But there's something to be said about Vitriol being in tune with Moorish sensibilities too, of which Lutens has long been an accolyte. Blue vitriol is copper (Cu), green vitriol is iron (Fe), and white vitriol is zinc (Zn), all Hermetic references for the initiated. Sulphuric acid (historically known as 'oil of vitriol') was formerly prepared from green vitriol in a ritual that crossed into the alchemical. The Moors sold vitriol preparations as an antiseptic panaceia. There's this thing in Shi'ism called ta'wil, it's this idea where "you take anything back to its root significance, its original self". A cleanse going for the bone!

On the other hand, in late 19th century carnations were innocent, popular buttonhole flowers; Oscar Wilde was said to sport one and companies producing such fragrances were a dime a dozen, rendering the carnation soliflore a dominating fragrance trend of the Victorian era. The dandified character of carnation scents has persisted: from old-image Floris Malmaison to Roger &Gallet's ever popular ~but ultimately discontinued~ Blue Carnation all the way to modern-day retro Dianthus by Etro. 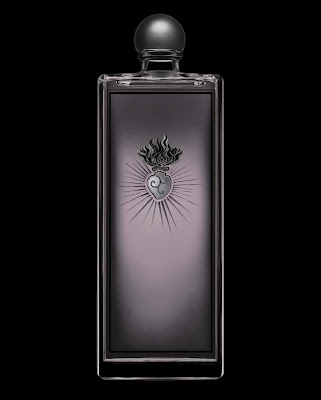 The opening of Serge Lutens Vitriol d'Oeillet is sharp, caustic as befits the name though not smelling of sulphur, without the dense powdery note that surrounds the rich floral heart of retro carnations such as Caron's Bellodgia. After all, clove, the main spicy component in creating a carnation accord in perfumery, is called clou de girofle in French, same as a pointy "nail". But despite the disruptive nails on a chalkboard of the opening of the new Lutens fragrance, the progression of Vitriol d'Oeillet softens gradually; much like Tubéreuse Criminelle hides a silken polished floral embrace beneath the mentholated stage fright. In Vitriol d'Oeillet's case Serge hides the heart of a lush lily inside the spicy mantle. Indeed it is more of a lily than a carnation fragrance, as per the usual interpretation of carnation in perfumery.

The spices almost strangle the lily notes under cruel fingers: black pepper, pimento, nutmeg, cayenne pepper, pink pepper with its rosy hue, paprika and clove; in Serge Noire and Louve the spices serve as a panoramic "lift" to the other notes, here they reinforce what was a hint in the flower. The woody backdrop of cedar is softening the base, but lovers of Serge's and Sheldrake's candied-fruit-compote-in-a-cedar-bowl will not find the sweet oriental they have grown to expect. Vitriol d'Oeillet is resolutely spicy, rendered in woody floral tonalities that only slightly turn powdery towards the very end.

To give perfume comparisons: If you have always found Secret Mélange, from Les Caprices du Dandy collection by Maître Parfumeur et Gantier (a fragrance which dared to mix cold spices and flowers and harmonize the accord with warm woods) quite intriguing, you have good chances of liking the jarring nature of Vitriol d'Oeillet. So might lovers of Caron's Poivre (which is vastly superior nevertheless) or of the dark, suffused imagescape of Garofano by Lorenzo Villoresi and E.Lauder's intense Spellbound. If you were looking for a classic, dense, feminine carnation floral or a minimal contemporary treatment oif the note such as in Oeillet Sauvage by L'Artisan Parfumeur, you might be scared by this violent yet diaphanous offering.

Oddly for the actual formula, since it's chartreuse liqueur which is infused with carnation petals and alchemically it is green vitriol which hides the greatest power, Vitriol d'Oeillet if of a greyish-lilac tint which looks someplace between funereal and alluringly gothic-romantic. The sillage is well-behaved, indeed subtle, perhaps because vitriol derives from the Latin vitrium, meaning glass, therefore denoting a certain transparency and lightness. Vitriol d'Oeillet is androgynous with great lasting power that seems to grow in depth, becoming a little bit sweeter and woodier as time passes.

Serge Lutens Vitriol d'Oeillet belongs to the export line, available at select stockists around the world and at the official Lutens site, 95euros for 50ml of Eau de Parfum. The limited edition engraved bottles depicted cost much more.

A generous-sized decant is available for one lucky reader. Draw is now closed, thank you!

What is it you find intriguing about the concept?
*Share with link: Tuesday, July 19, 2011