Blood Concept Fragrances: For the Vampire in you

I never knew that Dracula was so eloquent in his particular obsession, but apparently he must be: "The human body is totally pervaded by a liquid vital rush that brings us what we are most fond of: Life. Filled with legends and meanings‚ blood is soaked with mystery, fascination and respect: it’s the most tested and studied part of the human body. Hiding the multitude of secrets that reveals our inner and unique way of being. BLOOD Concept is a ceremony devoted to the pulse of life and its visceral boost. It is actually the river of life." Makes your blood curdle, doesn't it; but no, the author isn't Prince Vlad Tepes himself or any of the vampires in the Twilight sage by Stephanie Meyers. It's the ad copy of a new Italian niche fragrance line. Figures. 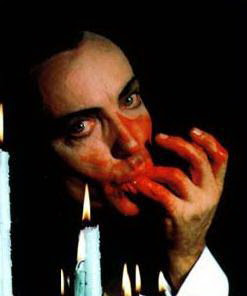 The concept for Blood fragrances belongs to Giovanni Castelli, a fashion designer and the co-founder of the brand Acqua di Stresa, and Antonio Zuddas, an artist who works in advertising as a copywriter and photographer. They developed the fragrances in collaboration with Apf France in Grasse and the graphics were done by Fabrizio Piras and Giuseppe Porcelli. The concept follows the historical progression of blood type groups through evolution, from the oldest, O, to the newest AB. The scents were officially introduced to the public in Excence exhibition in Milan on March 31st.

Blood Concept fragrances are a brilliant exercise in marketese, as they take as a springboard one of the most influential concepts: that fragrance should suit the wearer. In a much more primeval way this time, not focusing on skin type, hair colour or preferences and associations, but deep within one's blood. Within one's blood group, more like it, as it would be impossible to account for every nuance, like any good microbiologist worth his/her salt would know. 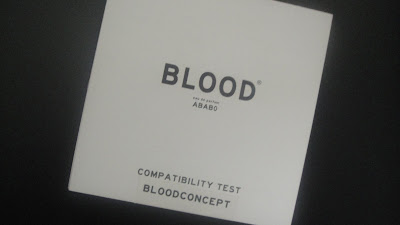 The sample pack came in a scratch & sniff little pocketbook, full of cards with each blood type on the front, scratching surface which releases microcapsules of scent when you drag your nail fingers on it, and the fragrance notes and type of scent (along with a sex demarcation which is unisex, i.e. shared between the sexes) on the back of the cards. The pack reads Compatibility Test. I mean, geez, you have to give it to them! It's as if the scents fuse into your organism and perform some microcosmos ritual. They're careful to say nevertheless that you can test them all and choose whatever speaks to you, regardless of your actual blood type. Phew...I was worried a bit there for a moment!

Perfume B is a unisex woody spicy composition with red apple and black cherry in the top, artemisia, pepper, pomegranate and black tea in the heart; patchouli, tick wood and metallic notes in the base.

Perfume AB is a unisex mineral composition with aldehydes, aluminium and slate in the top, pebble and aqua in the heart, cedar wood and metallic notes in the base. 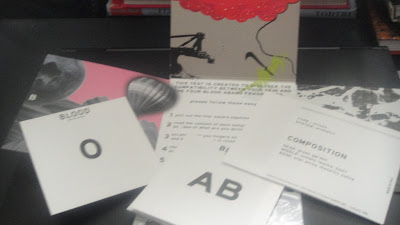 The mention of metallic notes isn't that creepy actually (i.e.as in blood, metallic due to iron content). Think of it more in the lines of popular aromachemicals du jour like Ambrox and Iso E Super, which incidentally give a uniform woody aspect as well (to almost each and every one of them, to my nose).
I'm not sure if the method of scratch & sniff cards gives an accurate enough imprint of the fragrances; I'm hypothesizing that it's a bit like judging based on scent strips on magazines. They give you a general idea, but you really have to test the juice on skin to make a definite decision. Based on those, nevertheless, I get the feeling that these are fragrances composed around the same more or less principles with minor nuances: they're niche scents, resolutely unisex in their carriage, aimed at people inquisitive to smell something not immediately identifiable (the given notes of even familiar ingredients such as vanilla, apple or basil don't proclaim their presence as such) and they're not aimed to cajole or seduce under any circumstances.

If pressed I'd say that Perfume B is the one I leaned to, it feels less clinical thanks to its spicy bouquet; a bit as if Jean Claude Ellena was on acid, composing at some remote mountain top cabin made of teak wood. Perfume A is also rather interesting, full as it is of the very green smell of tomato stems, a very agreeable aroma. A bit of an historical paradox though, considering solanum lycopersicum's trajectory in time. The rest didn't grab me; maybe I had high expectations from Perfume O as it poses as a leather. It's rather a woody suede and I think we've seen our share of those. Perfume AB seems to contain that weird molecule that is also present in Etat Libre d'Orange Secretions Magnifiques, and resembles most closely what Chandler Burr had referred to as "sink cleanser spilled on an aluminum countertop" (speaking of dihydromyrcenol); think crazied Godzilla lime froth and you're there.

All Blood Concept fragrances are available in dropper bottles of 40 ml; a little bit medicinal and at the same time decadently 19th century vampiric as well.

Photo of Udo Kier in The Blood of Dracula (1974). All other pics by Elena Vosnaki.

Disclosure: I was sent the sample pack by the manufacturer.
*Share with link: Wednesday, April 20, 2011