Parfums Boucheron, sprung out of the famous jewellers by the same name and until recently in the hands of L’Oréal, will soon join Interparfums, a dynamic group of no less than 259 millions of euros in sales last year. The agreement will be effective January 1st 2011 and will last for 15 years. 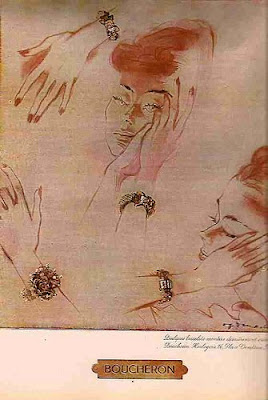 Founded in 1982, Interparfums control the licences of fragrances for Burberry, Paul Smith and Jimmy Choo (a new, upcoming fragrance by the celebrated shoe-maker is in the works), while they also own parfums Lanvin.
Boucheron, on the other hand, is making its presence known in the Far East with the launch of 6 to 10 jewellery boutiques in the following 5 years in the Chinese market, in accordance to Sparkle Roll Group Limited of Hong Kong.

The fragrance portfolio of Parfums Boucheron is fairly restrained: Five fragrances comprise the current line-up, invariably of high quality (and in the case of Boucheron de Boucheron, to majestic effect): B de Boucheron, Boucheron (femme), Boucheron pour homme, Miss Boucheron et Jaïpur Homme. Boucheron Trouble and Initial have been discontinued, according to our sources.
Usually take-overs spell news on the fragrant front, be it in the way of repackaging (usually with a face-lift to the scent itself) or a new plate of advertising opportunities. Let's hope for the latter, rather than the former. Parfums Boucheron are fine as they are.
*Share with link: Tuesday, December 21, 2010