It's not often that I am caught completely off-guard and totally surprised by something. Usually my instincts and my (hard-paid for) experience guide me through most eventualities with assured steps. Yet the latest Miss Dior Chérie L'Eau managed to make me do a 180 degree turn! Not because it is a masterpiece. Far from it. But because I was fully prepared to absolutely hate it, just because I have been alienated by the sugary, patchouli, fruity spin of Miss Dior Chérie, a scent that is completely different than the classic chypre Miss Dior from 1947 (Dior's first scent) of which you can read a review here. The shared name makes one think hard on how much travesty one can stomach. 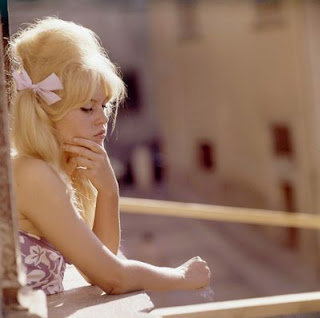 Furthermore, the developments at Christian Dior for some years now have been quite unsettling as the whole image has been cheapened and ultimately vulgarised. Not to mention that the very latest observations I made regarding reformulations afoot to all their classics, from Diorissimo and Diorella onwards ~signaled by cunningly new-old looking packaging only~ has left a bitter taste in my mouth... So a testing at Sephora just because it was the latest thing provided a rather pleasant jolt out of the doldrums of contemplating on "what Dior had been"...
According to its creator François Demachy, "Miss Dior Chérie L'Eau is not a complicated fragrance". Imagine a freshly scrubbed young lass, put a headband on her bouffant long hair, a mock pout with no depths of murky sexuality à la Catholic girls and you're basically got your sanitized BB.9
(ie. Bardot version 2009) ~a product of bourgeois paternalism and market satiation! Yet, didn't Bardot herself began her career posing for bourgeois magazines and studying ballent under Boris Knyazev?

Demachy has been instrumental in the creation of Aqua di Parma Colonia Assoluta, the re-issue of Pucci Vivara, Fendi Palazzo and a pleiad of scents for parfums Christian Dior (he almost seems like in-house perfumer at this rate, which I m not sure how to interpret!): the newest Dior Escale à Pontichery which we recently reviewed, as well as last summer's Escale à Portofino, Farenheit 32, the masculine Eau Sauvage Fraicheur Cuir and Dior Homme Sport, the Dior numbered Passages special collection of scents Collection Particuliere, Midnight Poison, Dior J'adore L'absolu... 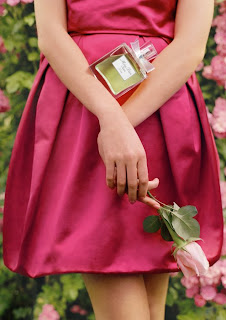 Vogue.co.uk describes Miss Dior Chérie L'Eau as "a sparkling and distinctive floral scent blended with notes of tangy yet spicy bitter orange, Gardenia and white musks that aims to sum up the certain 'je ne sais quoi' of the ultimate French girl. Pretty in every detail - down to the bottle's iconic bow - this lighter, François Demachy-designed adaptation of the original perfectly fits a long-standing perfume brief from Christian Dior himself, "Faites-moi un parfum qui sente l'amour" (make me a fragrance which smells of love)."

I don't think Miss Dior Cherie L'Eau quite captures all that (especially the amour part), but it's not typical of the myriads of fruity florals on the market: First of all, the scent is decidedly floral for a change, but with a certain modern translucence and a lightl dewy feeling that makes for a refreshing take on green florals. The direction is "muguet"/lily of the valley "clean" (the lucky charm of Christian Dior himself) but done via a green, budding gardenia accord; which might be replicated by jasmolactones, if the eerie feeling of familiarity with Pur Desir de Gardenia by Yves Rocher is anything to go by, although the Rocher one is much more gardenia-oriented than this one. A small facet of the pleasantly bitter citrusy touches of Escale à Portofino and Mugler Cologne is also hiding in there with a very soft powdery drydown, fluffy like an air-spun macaroon with green filling and a little laundry-day feel. The girl wearing the John Galliano dress in the shade of candies, model Maryna Linchuk shot by Tim Walker, is perky, and innocently upbeat in a 60s kind-of-way (hold the orgasmic cries of the original Bardot song that accompanies the commercials shot by Sofia Coppola,; this one is a pouting Bardot seen through unknowing ten-year-old eyes!). The blotter beckons me from the depths of my old, ivory LV Monogram Vernis handbag: should I give it one more chance? 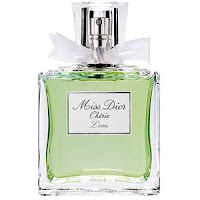 Last but not least: For those of you who might as well get a dose of the old standby classic gardenia chypre of Miss Dior, there are some bottles over at Fragrancenet.com as well as the standard Miss Dior Chérie. Using code SHRINE saves you a further 10%!(offer good throughout May).