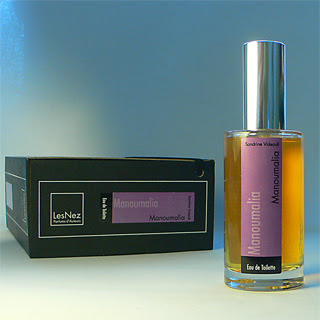 Kia ora tātou!, which means "greetings" in New Caledonian, should be the line that introduces the first fragrance of 2009. As reported earlier, Manoumalia is the newest fragrance from small niche brand Les Nez (Parfums d'auteurs) from Klingnau, Switzerland, officially out in January, of which I was fortunate to get a pre-sniff.

Sandrine Videault, the perfumer of Manoumalia, herself a New Caledonian, was inspired by Wallis [1] in November 2007 in almost an ethnographical exploration to appreciate the essences that would comprise the theme based on the olfactory culture of this exotic locale. Following a documentary of RFO televized in New Caledonia, Malia, a native woman, offered to show Sandrine her savoir-faire of perfumes, in which Tuitui [2] , the par-excellence-Wallesian essence is the protagonist. Her name, Malia, became part of the fragrance's name.
Manou on the other hand is a tad more complicated: When visiting Ouvéa, an island of the Kanak tribe, it is expected to present a traditional gift on visiting a local family or when meeting the tribe leader: the "manou" (pronounced man-oo) and some tobacco. "Manou" is a piece of material used as a wrap around the hips, evoking other exotic uses of woven cloth in different cultures around the world: the colourful gold-threaded saris of India, the alluring sarongs of Java, or the pin-up immortalised pāreu (or pareos) of Tahiti.
What's intriguing me greatly however is a fleeting memory of the "Code of Manou" from my early university days while assisting a Sanskrit professor write up a treatise on etymological parallels to ancient Greek. Part of the earliest Vedic writing (12th century BC), the "Code of Manou" is according to Alexander del Mar ~a 19th century coin historian, all but forgotten by historians, if not by history itself~ who, intent on claiming that ancient Indian scriptures reference coinage in the Indus valley before anyplace else, etymologically tied Manou with lawgivers Mene of Egypt and Minos of Crete. Although the claim is weakened by lack of concrete archeological evidence, the mention of Dharana, a coinage, coming from the verb Dhri (=to hold) instigated inadverted fascination in me: The ancient Greek coin of δραχμή/drachma would therefore be coming from the Indian root Drax (=handful)!

Should we then approach Manoumalia as the gift to Malia or the gift by Malia? Or perhaps the wrap of Malia, in which the sum of her aromatic journeys has been contained? Or yet still a handful of Malia's spiritual substance in the form of a fragrance to be used on one's person? It is always enjoyable to ponder on the onomastics of a perfume, allowing me to effortlessly slip into reverie.

The tradition of the Wallisians is richly steeped into the preparation of fragrant potions. Bracelets and necklaces (such as leis) are made through weaving intoxicating blossoms; spices such as the dusty yellow of curcuma is used to paint the body; sandalwood dust is made into a thick paste for treating and colouring the hair. Tutui [2] is comparable to importance to what tiare is to Tahitians. To Wallisians being illeterate in the language of scent is akin to being unknowledgable in the wiles of attraction and almost close to being a social pariah! Intepreting this culture into a single fragrance seems impossible and in fact would not be wise. Therefore Manoumalia focused in bringing some aspects of it into a modernised, westernised fragrance that can be appreciated by perfume lovers of a certain niche.

The Manoumalia heart is sketched around Fragrea Berteriana [3], a bushy shrub growing to tree-like proportions with intoxicatingly scented flowers which are traditionally strung into leis. The Polynesians are long known to make a perfume by macerating the flowers into coconut oil. The Hawaiian name for fragrea, pua kenikeni, translates roughly to "ten cents flower" or "coin flower", thus named because of the cost per flower at one time. (You can even buy your own seeds and grow it from scratch!) 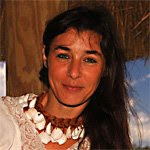 One of the last students of Edmond Roudnitska, Sandrine Videault is best known for her historical fragrances (such as her Kyphi recreation for the Cairo museum in 2002) and olfactive shows. Previous fragrances composed by her include Ambre Indien by Esteban and La Rose de Carole Bouquet for Truffault, Paris.

Mentioning Roudnitska in the same breath as a floral fragrance, one would expect an affinity for green touches allied to subtle chypré qualities. And yet I only have to smell the drydown of Manoumalia to draw different conclusions. The sparseness of formula seems to be there because byzantine plots have been eschewed in favour of a streamlined approach. But the radiance of its huge floral heart along with a butyric touch (that recalls chamomille to me) conspire to evoke some aspects of Fracas. The strange mixture of powder, burnt wood and rubber which seems to be at the core of the latter reverberates through this floral as well. I am hypothesizing that there might be inclusion of aldehyde C18 (technically gamma-nonalactone) for its unctuous, coconutty, milky, soft tropical quality too. The Fauvist approach of Cellier, who also favoured streamlined compositions, is not as jarringly evident in Sandrine's work here, nevertheless. The composition is softer, warmer, making it less monumental but more approachable by many.
Although tiare has been a darling among teen celebritoids in such permutations as Monyette, Paris and Coquette Tropique (by the same brand), Manoumalia rises above them to the level of Intense Tiare by Montale, a fragrance richly redolent of monoï (tiare petals macerating in coconut oil) ~although I am not suggesting they smell the same. The almost fruity jasmine-y intensity of ylang-ylang never fails to make my mind fly to warm tropical paradises in the midst of winter cold, but it is the earthy unrooted vetiver that provides a grounding touch like immersing my hands into a bag of uprooted bulbs. (Vetiver is much more apparent when the fragrance is sprayed on skin than on a mouillette, please note).
A subtle vanillic-woody underpinning undulates out of the richness of the floral-woody chord of Manoumalia remaining for a while on the skin as a discreet memento of a journey to the South Pacific.

Manoumalia will be available in a 50ml bottle directly through the Les Nez site starting sometime in January, as well as at Luckyscent, Aus Liebe Zum Duft, and Cale.it

[1]Wallis and Futuna is a Polynesian French island territory (but not belonging to, or even contiguous with, French Polynesia) in the South Pacific between Fiji and Samoa.
[2]Tuitui is a plant of the family Euphorbiaceae, commonly known as Candlenut/Varnish Tree (Lichtnussbaum in German) with white flowers in a shape like a cross between orange blossom and jasmine which is used mainly for the nuts and the oil distilled from them.
[3]Fagraea is a plant endimic to the South Seas islands, belonging to the family Loganiaceae, one species of which is the famous fagraea berteriana (pua kenikeni/Perfume Flower Tree) abundant in Maui.

In the interests of disclosure, I got sent a free sample of Manoumalia through the Les Nez give-away of samples during the last forthnight of December.
Pics copyrighted by Les Nez, used by permission
*Share with link: Tuesday, December 30, 2008