It's this famous description of Italy in Goethe's song from Wilhelm Meister "Kennst du das Land" (set to music as opus D.321 by Franz Schubert) that opens the description of Roxana Illuminated Perfume by natural perfumer Roxana Villa. Roxana is of the South (not Italy though) and it shows.
I don't consider it embarassing to admit that I discovered Roxana and her company while searching for paintings and "stumbled" on her blog. What made me pause and pay attention was the original artwork I saw there, which I soon found out was created by Roxana herself, a competent artist in both the aromatic and visual arena, and the illustrator Gregory Scott Spalenka. The illustrations on her site bring to mind the alchemical tradition of the Middle Ages as does the flou artistique imagery by Spalenka evocative of the realms that the fragrances come to evoke. Her method of working was referenced as "creating a painting of a perfume": And then the olfactory promise laid out its trap.

Natural perfumery has known a gigantic resurgence in later years, filling an existing lacuna and answering to two main needs: wanting to go back to the roots of alchemical perfumery after what seemed like a highly technology-driven and marketability-focused long phase, as well as the desire for individual, more esoteric perfumes that will act as a connection with Earth. Of course the latter might bring to mind cliché images of Earth Mother types chanting Om as they chime little bells doing their yoga routine and growing roses that like to be read Milton by the light of the moon, resulting in pot-pouri alloys fit for the headshop. This brings its own fatootsed discourse, but nothing could be further from the truth: many of those people interested in the field are not pursuing it from the aromatherapy or arcane angle at all but from the artistic viewpoint and they are genuinely vuying for beauty, often casting their eyes back to primitivism the way Gaugin did. There is also the further complication of what exactly defines "natural", what methods of extraction are allowed (are isolates and C02 extractions OK? Yes, apparently) and the ad hoc limitations of a natural palette. Not to mention that how to make a natural-based fragrance suitable for all is often a challenge because of the sheer complexity of natural essences, like oakmoss. Yet natural perfumers do try and they enrich the field with their efforts.
Roxana describes her own particular division of natural perfumery as "botanical". As she explained to Sniffapalooza: "Botanical is the term that resonates with what I choose to create, both visually and aromatically. At times I include essences that come from the sea or apis realm, which technically are not botanical in nature, however my palette is comprised of ninety nine percent botanical ingredients. I choose to work with essences that are whole, organic and of vital origin whenever possible. The animal ingredients like civet, ambergris and castoreum, contained in many natural perfumes are not in the fragrances I formulate."

Born in Buenos Aires, Argentina, Roxana grew up in Los Angeles, California. Upon receiving a BFA in Communication Design from Otis Parsons in downtown Los Angeles, Roxana moved to New York and began work as a freelance illustrator in the world of publishing. After the birth of her daughter, she studied Aromatherapy formerly learning the miraculous powers inherent in the plant kingdom. Blending the knowledge of nature with a loving art spirit, Roxana now creates perfumes that reflect a healing modality whilst celebrating the individual. In June of 2007 Roxana was the keynote speaker at the Ojai Lavender Festival and she continues to speak and teach regularly. 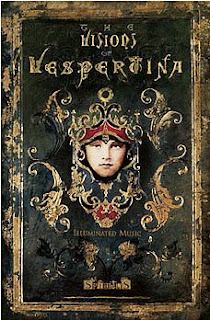 Two lines comprise her fragrant bodywork: the Californica series which celebrates the aromatic landscape of the state of California (Q, Vera, Sierra, Chaparral) and the Literarium series, inspired by literary and musical exempla, honoring the fine art of story-telling (Vespertina, Lyra). There is also Aurora, one of her first florals.

All the Roxana Illuminated Perfume scents I sampled share the natural perfumes aesthetic in that they wear close to the skin and have a herbal, non-perfume-y quality about them which is surprisingly comforting sometimes in contrast to the scintilatting but -alas- also often screechy projection of mainstream perfumery. The initial jolt shouldn't fool you into dismissing the accords, because a few minutes later the projection becomes friendly. The two that captured my interest most were Q and Lyra.
It would be natural you might say, if you have followed Perfume Shrine, to see that the earthy woody Q made an impression as it is richly infused with the tannic smell of oak, peppery accents and an ambery-like base reminiscent (to me) of labdanum and patchouli, which is restrained on the sweetness aspect. Q (for Quercus agrifolia) began as a tribute to Beltane (one of the four "fire" festivals in Celt tradition) which auspiciously led to the mighty oak. The feeling is poised between seasons, very fit for spring or autumn, making me want to sit under the deep foliage and let the wind breathe tales of yore into my ear.
Lyra on the other hand is a more vivacious, euphoric affair with the immediacy of flowers, especially the fresh, almost fruity piquancy of what seems like orange blossom, jasmine and tropical ylang ylang singing out of the bottle like alto voices in melodious thirds. Inspired by the brightness of the night-sky asteroid near Vega but also the heroine of the book "The Golden Compass" by Philip Pullman, the floriental Lyra is shining with its own bright veneer. This white floral composition is especially appreciated in a natural blend as there is none of the florist shop headspace of department store fragrances: rather the blossoms exude a deeper, more solid, hefty presence in the accompaniment of a classic warm base of ambery resins and hesperidic overtures. Perhaps the only drawback is the rather limited lasting power, but this is something that can be easily amended by re-application.

CHAPARRAL
Comprising essences, accords and tinctures are of plants found in the Chaparral Biome of California.
Notes include: Citrus, Mimosa, Iris Root, Sage, Rhodendron, Pine, Cypress. The 2nd edition is available this Autumn. Portion of the proceeds from each 1/4 oz perfume sale supports The Chaparral Institute.

VERA
Many of the essences are grown and distilled in Ojai, with regional plants utilized in our specially prepared tinctures.
Notes include: Lemon, Lavender, Orange Blossom, Hay, Coastal Sage, Seaweed, Labdanum. (Currently in its 2nd edition).

Q (known as Quercus in a previous incarnation)
Tinctured Oak leaves combine with accords of Citrus, Wood and Resin. (Currently in its 2nd edition) Portion of the proceeds from each 1/4 oz perfume supports The California Oak Foundation.

SIERRA
The most complex of our perfumes, combining chords within accords of Conifer, Wood and Resin. Portion of the proceeds from each 1/4 oz perfume supports TreePeople. 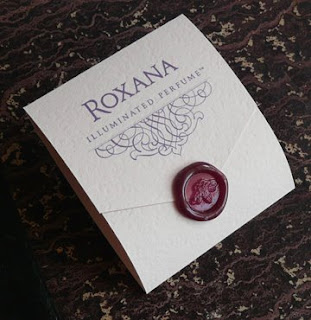 What is most intriguing for the numerous women in search of their very own individual perfume is the Custom Perfume Portraits service, of which there are two options: Bronze package: $5oo and Platinum package: $1000.

Roxana will be attending the October Snifapalooza Fall Ball in New Yok City, headlining the October 11th luncheon (presenting a fifth Californica surprise scent, the 2nd edition of Chaparal and solid versions of her scents): to participate, contact Karen Adams at kadams@sniffapalooza.com.
For those in California, there will be an Aromatherapy 101 Seminar by Roxana on November 12th in the Santa Monica Massage School. Call 818.763.4912 to register.

Pics of artwork by Greg Spalenka and Roxana Villa provided by Roxana Illuminated Perfume, not to be reprinted wihout permission.
*Share with link: Monday, September 29, 2008