Vetiver Series 5: the Straight, the Strange & the Sweet 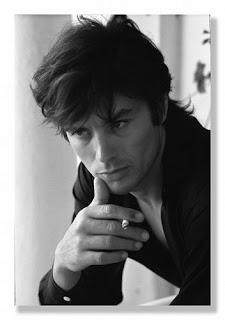 There is just something about empyreal vetiver that makes it the perfect transitional olfactory module between an Indian summer of bright blouses and the more serious tweeds of truly autumnal weather. Vetiver's shades of green oscillate between the pale jade of cooler citrusy or milky-soapy variations of the note to the subterranean raw umber of earthy persuasions, through warm hazel with the golden flecks of sweet renditions. Sometimes this improvised colour schema is dictated by inherent personalities that emerge like leprechauns out of the flacon. Othertimes it has to do with my own sensibility when I am matching a fragrance to a current mood and letting it take me over the edge of perception.

The cooler end of the spectrum has the zestiness of hesperidic touches that end Cologne-like pick-me-up mode for days when the daze of summer holidays hasn't fully escaped my mind and the rush of the academic beginnings hasn't set in properly yet. The classic Vétiver by Guerlain is such an example, while I Profumi di Firenze Fresco di Vetiver with its bright yellow Sicilian lemons pushes the boundaries of freshness even more ~hard to picture it in cooler weather~ while still having vetiver sing its persistent basso continuo. On the other hand Vetiver by Floris although pleasantly grassy and citrusy lacks the distinction of more bracing compositions.

Some fragrances that bear the grassy root name on their fancy bottles bear little relation to the smell of either the dried roots or the potent essential oil rendered from them. You would expect from Le Labo, makers of Patcouli 24 that smells perversely of tarry leather, to compose a scent that bears no accuracy between label and juice: their Vetiver 46 is cool incense smoke with no root in sight! Patricia de Nicolai's Vetyver buttresses the root with jolting spice (black pepper, clove, coriander and cumin) and lemon tartness to assuage the earthiness in an scent that seems misleadingly labelled, interesting nonetheless. Creed's Original Vetiver opts for a lathery approach which comes and goes like whiffs of a foamy bubble-bath escaping through a closed bathroom door. Although the root is present, the alkaline smell of soap and the crispness of citrus that wafts nicely make this more office-appropriate than rolling on the forest floor after an improptu picnic a deux. When Lanvin decided to ressurect Vetyver L'Homme from oblivion (originally it launched in 1964) they engaged Francois Robert from Synarome who used 10 all-natural ingredients out of the alleged 14 to render an understated, slightly fruity variation that makes me wonder how the original might have smelled. As it is it's not corresponding to the expectations I formed reading the detailed descriptions of the Lanvin site. But if Lanvin's is meak and sterile, Annick Goutal's Vetiver is the other face of Ianus, the non-smiling one. Its iodine ambience with salty overtones puts it firmly into the territory of atypical and thus stimulating. 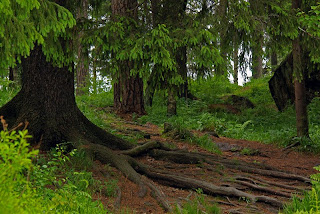 Direct vetiver fragrances emphasize the character of the root in a straight-arrow way, hitting bull's eye every singe time. The prototype Vétiver Extraordinaire by Frédéric Malle (composed by Dominique Ropion) contains possibly the highest levels of vetiver essences on the market today: it resembles verdant wet patches amidst cobblestones in a Medieval Italian town where students of medicine sharpened their pencils with knives. Route du Vétiver from Maître Parfumeur et Gantier bursts forth with the buoyancy of a surgical scalpel: it almost cauterizes the olfactory nerve with the raw sharpness of its Bourbon vetiver, upholded with a little blackcurrant, lots of patchouli and woody accents. The dark liquid that nests inside L'artisan Parfumeur Vetiver is pure; strong and earthy Bourbon vetiver joined by oakmoss and patchouli in an engaging conversation of earthy personae with the merest hint of hesperides. In the dimuniation of the citrus effect, Santa Maria Novella went one better with their own Vetiver: earthy, strong, especially for an Eau de Cologne concentration, with not a lemon rind in sight.

Smoke often compliments the green side of vetiver with an ineffable elegance. The classic Vetyver by Givenchy murmurs the way a well-bred gentleman of another era might. Sycomore by Chanel Les Exclusifs has a celestial beauty beneath its auspicious smoke rings. Etro Vetiver opens with a strong, earthy, true vetiver note that is dry and straight with a resemblance to the one by L'artisan minus the citrusy top and little clouds of smoke in the background. The very dark-coloured Vetiver from Lorenzo Villoresi bursts forth with less grace, unapologetically and emasculatedly strong, buoyed by bergamot while sandalwood and pepper lend an appealing backdrop that peters out in smoke.

Perhaps the most interesting addition to vetiver for me is spice with its hot-cold interplay which keeps me alert and bypasses the risks of being maudlin. Andy Tauer used both clean notes (such as a composite of lily of the valley aromatics and clary sage) and strong spices sashaying around his vetiver in Vetiver Dance, a composition that is destined to become beloved.

Sweet cadenzas with hints of gourmand delights flank some of the vetiver fragrances that can be shared by both sexes: From the slight sweetness of old-fashioned feminine Kus Kus by Bourbon French of New Orleans, which recalls the aldehydic powdery facet of Ma Griffe to the roasted French blend served with caramellised sticks of Black Vetyver Café by Jo Malone. Carlo Corinto Vetyver is darkish in hue, earthy and aromatic, but with the intrigue of licorice upon twisting the cap which makes it peculiar. Although it might seem like it has some of the sharpness of Route de Vetiver initially, it softens considerably thanks to sandalwood. My personal default gourmand vetiver is none other than the nutty, almost boozy Vetiver Tonka from the Hermessences composed by Jean Claude Ellena: its coumarinic sweetness well tempered by the grassy aroma, it's easy to wear in any weather, thus panseasonal and wafting a tasteful sillage as my arms brush against my clothes. And then there is the majestic anise and sweetly-buttery amber delicacy of Vetiver Oriental by Serge Lutens, an oriental at the edge of foresty that leaps into winter effortlessly.

Last but not least there are scents including a hefty dose of vetiver so magnificently evocative of places and situations that they defy a simple pigeon-holing; you're at a loss on how to begin to describe their arresting strangeness. Onda by Vero Profumo is such a fragrance that has the power to obliterate seasons and moods.