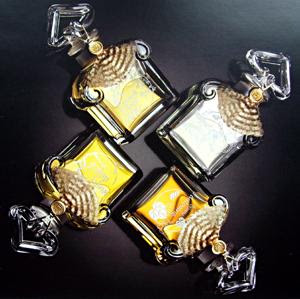 2008 marks the 180th anniversary of Guerlain, as we had noted a short while ago : It was Pierre François Pascal Guerlain who opened his first shop in Rue de Rivoli in Paris in 1828. Therefore, to celebrate this landmark on May 15th 2008 a limited box-set of four different perfumes representing the four seasons by Jean Paul Guerlain will launch: Eau de Toilette Muguet de Printemps, Eau de Parfum Quand Vient l'Été, Eau de Parfum Brume d'Automne and Eau de Toilette Winter Delice.

The fragrances will be presented in a black leather box in 35 ml crystal Baccarat 'heart shaped stopper' bottles. Each bottle is engraved by hand with a small drawing, illustrating each season.
With only 85 copies made and a price of 2500€, this release is targeted towards the serious collector!


We will occupy ourselves with recent Guerlain launches such as Cruel Gardenia shortly!