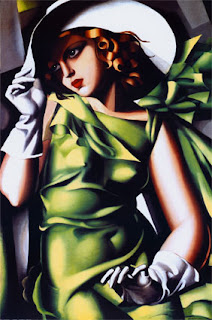 In our investigation of how absinthe has inspired artists, writers, as well as filmmakers, we must return to the art of perfumery with its vast ability to evoke reminiscences. Many fragrances have drawn upon la fée verte in recent years and its herbal constituents: wormwood or artemisia and aniseed, as well as its perceived aromas like liquorice and angelica.
Perfume Shrine has tried to organise the chaos and provide a list of scents with the corresponding notes.

*Absinthe by Grandiflorum Fragrances: Largely redolent of offbeat anise, with orangey-boozy and woody notes accented with vanilla later on to soothe and appease, it's as if you're reading Poe by a woodfire cuddled up with a loved on to chase away the nightmares afterwards. Certainly not the most authentic absinthe fragrance around, but very wearable.

*Absolument Absinthe by Parfums d'Interdit: Absolument Absinthe has not one but two ingredients with mysterious and whispered about reputations. Cannabis is the second...Together with inky black tea, tangy bergamot, and the bracing note of Iranian galbanum, various white florals and spices such as nutmeg and cardamom, it deepens on sandalwood and musks sustaining its soft message on the skin for a long time. It's claimed that it conforms according to individual personal chemistry, but since I haven't found a willing speciment to try this theory out I can't proclaim its truth or fallacy. Tripy, if only because you want it to.

Here is Pascal Rolland courtesy of dabbler.ca talking about it:

*Absinthe by BPAL (Black Phoenix Alchemy Lab) : In this cult brand's inventory every little dark and gothic tale finds its narrator through the acocmpanying "imp" (short for sample in BPAL lingo). With such great names as Thanatopsis (the look of death in Greek), Golden Priapus, Enraged Urangutang Musk (!), The Pit and the Pendulum, Nosferatu or Saturnalia (after the Roman celebration) and the corresponding Bacchanalia, they have created a very weird and compelling niche; no less accountable for which is their site with a very active forum.
Absinthe is intensely liquorice-like, with a metallic minty top and a soapy drydown that fades fast. Notes: wormwood essence, light mints, cardamom, anise, hyssop, and the barest hint of lemon.

*Absinth by Nasomatto : like I had said when the line launched, this is a wonderful fragrance full of bittersweet notes of herbs, earthy pungent vetiver, possibly angelica or wormwood and some sweet element of vanillic florancy in there that accounts for the most delectable semi-gourmand effect possible. If this is how a modern aromatic gourmand should be made, then I'm all for it.

*Azurée by Estée Lauder : With its rather masculine edge despite its feminine gardenia aspirations, submerged into deceptive aldehydes or cyclamen and jasmine aromas, it opens on dark, musty oakmoss that grabs you and makes you pay attention. In a way though its leatheriness does not possess the striking green slap-across-the-cheek of Bandit or the smooth caress of a gloved hand that is Diorling; resulting in diminished revenue in today’s currency.

*Black Fig and Absinthe by Slatkin (nose Christophe Laudamier) : The treatment of figs is dark, gloomy and surupy like dried fruits smoked over for preservation during the winter months and surely an anomaly amidst usually green fig scents. Quite loud in its fruitiness but underscored by elegant, cool incense and dark wormwood to compliment the intese liquorice effect that first surfaced in Lolita Lempicka. Never too sweet and incidentally Harry Slatkin's preference from the whole line.

*Absinthe by Ava Luxe (nose Serena Ava Franco): a viciously green liquid that might stain your clothes, smelling remarkably close to the alcoholic spirit with a deep, dry anise drydown.

*Absinth by Nasomatto : like I had said when the line launched, this is a wonderful fragrance full of bittersweet notes of herbs, earthy pungent vetiver, possibly angelica or wormwood and some sweet element of vanillic florancy in there that accounts for the most delectable semi-gourmand effect possible. If this is how a modern aromatic gourmand should be made, then I'm all for it.

*Aromatics Elixir by Clinique (nose Bernand Chant): a mossy intense rosy composition that has a bitter beginning redolent of the wormwood plant. I dearly love to basque in its sillage when smelling it on passerbys.

*Azurée by Estée Lauder : With its rather masculine edge despite its feminine gardenia aspirations, submerged into deceptive aldehydes or cyclamen and jasmine aromas, it opens on dark, musty oakmoss that grabs you and makes you pay attention. In a way though its leatheriness does not possess the striking green slap-across-the-cheek of Bandit or the smooth caress of a gloved hand that is Diorling; resulting in diminished revenue in today’s currency.

*Bandit by Piguet (nose Germain Cellier): an archetypal leathery chypre, with the stunning start of emerald artemisia with equally pungently green isobutyl quinoline, a scent to cut your way through a crowd. 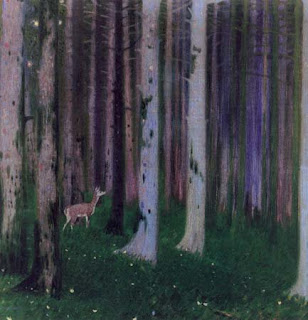 *Biche dans L'Absinthe by Gobin Daudé (nose Gobin Daudé) : part of the discontinued natural line by the homonymous perfumer, it is considered the uber-marvel of green scents. It's such a pity that such wonderful creations succumb to the crass marketing laws of commerce. Rarely seen on Ebay and fetching a pretty penny when it does. Don't miss it if you do find it.

*Déclaration by Cartier (nose Jean Claude Ellena): more of a spicy cardamom and cumin affair of refined refereshement than a jade-shaded liquid to make you feel anything but jaded, it nevertheless vibrates in the frequency of a slightly bitter wormwood accord. Delicious and probably one of my highest recommended masculines (or rather unisex) fragrances of modern perfumery. It has been singled out by Ellena himself as the creation he's most proud of , along with First (although this has been a few years ago, on Scented Pages, so we couldn't possibly exclude that a more recent specimen hasn't usurped that position)

*Douce Amère by Serge Lutens (nose Chris Sheldrake): a bittersweet harmony etched in opaline, singing in a warm contralto, curiously not as popular as others in the export line. It merits its own review shortly, so stay tuned.

*Fou d'Absinthe by L'artisan : a masculine fougère vaguely reminiscent of Paco Rabanne pour Homme with a resinous touch allied to woods. Not remarakably absinth-y and although I am a L'artisan fan I'd rather settle for Timbuktu if I wanted a unisex woody mix with resin and spice.

*Geisha Green by Aroma M: According to the creator of the line Maria McElroy who had the subtle sensibility of Japanese incense in her mind, this is an oil with a key aroma of absinthe, the tart, licorice-flavored liqueur. Here the composition os gently sweetened with black currant, mandarin, and violet, and softened with amber and tonka bean.

*Ivoire by Balmain: classic soapy aldehydic of relatively recent crop (1980) with so much primness that it passes for elegance. Its loveliest trait for me is the mossiness at the base which elevates from a mere soapy floral of chamomile, violet, rose and liluy of the valley. Very subtle wormwood touch, but worth including for a glimpse into the Id.

*JF by Floris: Another aromatic fougere for men. Supposedly named after the founder Juan amenias Floris, who was a Spaniard setting up shop in London , although the brand brandishes its British tradition like a coat of arms. Armoise (which is another name for wormwood shrub) is mixed with cypress. Overall light and fresh, with a mixed citrus top note, but rather simplistic.

*Panamé by Keiko Mecheri: No relation to Patou's Pan Ame, which sounds like an airline company. Reminiscent of pastis, an anisic based liqueur, with a soothing undertone of powdery musks, which isn't particulalrly distinctive. Similar to Douce Amere, but not as successfully executed.

*Soothing Aromaparfum in Aroma Allegoria line by Guerlain: A lesser known little line within the brand is Aroma Allegoria, three fragrances in an effort to combine aromatherapy with the heritage of a perfumery that went after the lush and luscious regardless of botanical properties. So it has been understandably circulating under the radar and eventually discontinued. Some might have considered it hubris to aim in that direction. They might have been right all along.
Soothing Aromaparfum has a predominent linden accord backed with vanillic musk and a touch of wormwood to keep things interesting and despite its inclusion in this offbeat list, it does smell quite tender and cuddly.

*Wormwood by BPAL : From the company who loves to lay their hands on everything forbidden, here comes the bitter heart of absinthe as an almost single note. It will provide interesting fodder for conversation if anyone asks, that's certain.

*Angéliques sous la pluie by Frederic Malle (nose Jean Claude Ellena): rained upon angelicas is the name and the feeling is that of a gin and tonic on the rocks ~deliciously cool and bitter with a refreshing edge just like a cocktail after a hard day

*Angélique Encens by Creed: perhaps the best offering by Creed. Built around the dark green of the strange angelica plant, the harsh green of it tied to Chartreuse it blends the mysterious tonality of incense to the herbal managing to smell like neither ~rather a vanillic wonder of subtle shades like a devoré velvet cloak on naked feminine shoulders.

*Angélique Lilas in Aqua Allegoria line by Guerlain: A true lilac note in fragrance is one of the most elusive things for an avid perfume lover. Here there is a smidgeon of a good approximation sometime into the development of a slightly bitter opening that adds interest, with the shrill addition of the dreaded Calone (synthetic acqueous melon note). If only I could isolate the really good part!

*Angélique Noire by Guerlain (nose Danièle Andrier): As I had previously noted, not particularly "noire", nor particularly angelica-rich, "we are dealing with a pre-Raphaelite Madonna with curly hair and silky robes that is lost in mystical reverie over the impending Nativity or a post-romantic painting by Waterhouse". Angélique Noire fuses the backdrop of a sweetish, oily accord of citrus and vanilla with a rather bitter beginning; the whole is quite pleasant if not the zenith point of the boutique Guerlain perfumes.

To be continued with fragrances focusing on anise and the often mixed-up star anise.