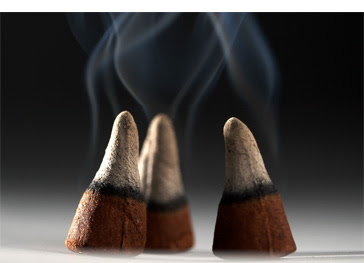 I breathe in the cool incense smoke from the metal brazier,
While thinking about a poem for my dear friend Lu Wa.

My sandalwood-hearted companion spits out plum blossoms of smoke,
Looking like the cloudy fog of the other world.


Perhaps it's the soul of my friend the old mountain man
in the smoke's dense patterns?


Incense extrême is the new fragrance by swiss niche perfumer Andy Tauer, that reminds me of the smoke's dense patterns that go up in clouds like the souls of dead men.
Based on a natural CO2 extract of Boswellia serrata (this is Indian frankincense, for those who didn't know) it is only one of a duo of incense scents that Andy is launching in 2008. It is to be accompanied by yet another incense fragrance later on in early spring, March 30, this time named Incense Rosé.


According to Andy Tauer (from Tauerperfumes):

"This natural incense scent inspired me to create different perfumes, with "Incense extreme" being the most abstract, almost cubist and uncompromising interpretation.
It captures the roughness of the climate of the semi desert where Boswellia trees thrive. It is translucent like the first whiff of incense smoke from frankincense resin on red gleaming coal. Yet, it is crisp like a night in the desert.
The Boswellia serrata extract is the central cornerstone of the fragrance, at a concentration of 25%, rounded off with dry woods and ambergris in the background. Soft iris balances the incense in the heart of the fragrance. And coriander and the freshness of petitgrain set the accents in the opening. The richness of the natural incense enchants with an array of impressions, playing differently as it develops, a kaleidoscope of colors and shapes."

As I spray on my skin a somber and cool smoky incense hits the nostrils with all the gusto of an open air fire on which aromatic woods and resins are slowly being burnt. The overall impression is of a fragrance that uses a high percentage of natural ingredients. Elemental, austere and slightly bitter, it calls the wild expanse of dry lands by which it has been inspired. All the while the soft underpinning of a piquant, peppery and tangy note adds its own sharp, short and cool touch. There is no floral impression, no powder that I can discern, as the incense dries off in waxy dropelts, leaving in its wake the lingering impression of trails of smoke through steely skies with the merest hint of sweetness left caressing the skin, like the memento of pleasures abandoned. Myself I admire its cold, clear character that defies pleasanties.

If you were searching for a warm, sensuous, ambery incense you are going to be somewhat disappointed. And although those latter are not my style really, I have to admit that it is less complex or indeed sensual than most of Andy's other creations. Still, there is a sparseness of style that appeals to an intellectualised sensibility, asceticism of both body and mind and the depravasion of earthy delights or the vanity of spirit. This might appeal to our inner sinner longing to repent of self spending in taste, play and song by a stint in the desert. Or our inner Spartan who longs for the black broth of his homeland instead of a feast fit for Lucullus on a borrowed table.
Whether this warrants the extrême qualitative adjective is food for thought: I think not as much. It lacks the weirdness and pungency that one would expect from something tagged so.
But this is not to detract from its value or its worthiness of trying out for yourself.

Tauer Perfumes Incense extrême comes in 50ml of Eau de Parfum concentration and will be available on 23rd of January.

Tomorrow a juicy post from an insider, a controversial player, that will instigate lots of discussion.
Please check again for it!