No other fragrance category is so shrouded in confusion and wrapped into such awe as chypres. From the pronunciation (listen to this file) to the ingredients constituting a classic chypre perfume, it all sounds too sophisticated for dummies. Or isn't it so? Chypre fragrances have an irresistible pull, making us appreciate perfumery all the more so, because they expertly hinge on both intellectual and sensual qualities. So let's make chypres easy for everyone!

Chypre means Cyprus in French, the island in the Eastern Mediterranean where the oldest perfume factory of the world was discovered in Pyrgos Mavrorachi (the name means "fortress on the black slope"  in Greek) dating to 2000BC, well before the Egyptian analogues. Cyprus has been instrumental in European history too: It has been a stronghold of Greek civilization since antiquity (the continuity of art styles and language suggests so) with a flourishing trade exchange with Egypt and later with the Roman conquerors; plus it has been the prime port of call of Eastern merchant routes between Europe and the Middle East, thanks to its strategic geopolitical position, and therefore supremely prized (and seized) by many foreign powers in the course of its millenia-long turmoiled history, starting with the Crusades and going...
But the name "chypre" (chypvra etc), apart from any geographical connotations, had travelled in aromatic stanzas throughout the Middle Ages, Renaissance and the Age of Enlightenment thanks to the vigorous commerce of the enterprising Cypriots who dabbled in a feminine product with an added scent: their famous "Cipria" powder, a cosmetic face powder -presented by various different local "houses"- which was further aromatized with the cypriot aromatic blends they had excelled at for centuries (And which, by all accounts, judging by the later specimens circulating into the 20th century, smelled not far off what we consider a chypre fragrance today!)

The vogue for powdered wigs in western Europe in the 17th century made Cipria one of the most widely used cosmetic products and the name is still referenced in Italian to this day for cosmetic powder. Let's not forget Cyprus is the mythological birthplace of Aphrodite/Venus, so the connection with beauty & grooming rituals was there all along. What better place then to sprout forth a product appealing to women (and the men who smell them) everywhere?

Therefore Cyprus and its "Cipria" had created a solid scent tradition. It was that tradition that the legendary François Coty-a Mediterranean merchant himself, hailing from Corsica- decided to put to good use. It is neverthless a myth that the first modern "chypre" was Coty's Chypre in 1917. Contrary to popular perception, François Coty was not the first to associate the name Chypre with a particular perfume. Guerlain's Chypre de Paris preceded him by 8 years, issued in as early as 1909. Chypre d'Orsay was the next one to be introduced in 1912. We can only attribute these names to the tradition of the "Cipria" echoed in these fragrances.

However it was Coty indeed (also dabbling in cosmetics) who first realized the familiarity of the chypre aroma of the Cipria would help make a fragrance drawing inspiration from it a commercial success. Even Chypre's packaging utilized motifs of cosmetics. His Chypre really took off and became an instant hit that created traction and a vogue for such "heavy" "green" perfumes. The rest, as they say, is history.

What makes a chypre "chypre", though?

In modern perfumery as established by Coty (and all subsequent chypres followed the scaffold he laid out) the basic structure of the chypre perfume is an harmony, an "accord", between 3 key ingredients: bergamot (a citrus fruit that grows all around the Mediterranean) - oakmoss (a tree lichen that grows on oaks mainly in the Balkans) - labdanum (a resinoid from cistus ladaniferus, or rockrose, a plant which grows in the Mediterranean basin, especially in Crete and Cyprus which was traditionally amassed off the hair of the goats that grazed on the bush). Three basic, common Mediterranean products, three Cypriot references for Chypre! Whatever other notes the sites/guides mention, those three must be in there for the fragrance at hand to qualify as a "classic chypre", a true descendant of Coty's Chypre from 1917. These "true/pure chypres" include such later perfumes as Carven Ma Griffe (1946) or E.Lauder's Knowing (1988)! 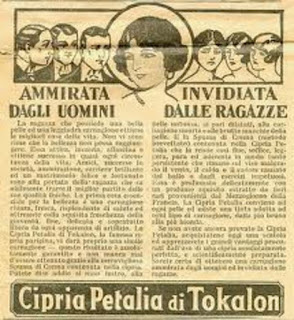 The tension between the fresh citrusy note and the pungent, earthy odor of oakmoss and of labdanum creates an aesthetic effect that is decidedly inedible (much like the masculine equivalent of fougère fragrances), denoting perfect grooming, always smelling "perfumey", polished, and often powdery. Which makes total sense given the background of the face powder it originated from! It also explains why chypres are extremely popular regardless of fashions in southern Europe as opposed to other countries.

Exactly because they smell like perfume, i.e. an add-on in no uncertain terms, they project an image of luxury, sophistication, status. They can be cerebral, cool and aloof, a The Times reader rather than chic lit browser, or they can be womanly and intimate like effluvium wafting off the boudoir, but whatever the case chypres always remain steeped in their Aphrodite-originating beauty.


Chypre fragrances often include patchouli and other woody notes, or animalic essences, for added intensity and mystery, while the heart of the perfume is always more or less floral. Although patchouli is ubiquitously included in chypres, it is a very common raw material for other families as well (such as the Orientals and many florals) and is therefore non conclusive as to the classification of any given fragrance ~barring very recent ones, more on which in a moment).

Because chypres are the sophisticated fragrance family par excellence it's very tempting to overreach and classify just any elegant and perfume-y fragrance in the genre!

It is especially common to confuse them with heavily woody Orientals (parfums Babani was on to something mixing the exoticism of Egypt with the chypre coolness in Chypre Egyptien back in 1923!) or with green woody florals such as Chanel No.19 (which is really a separate case, to which I will come back with a detailed breakdown.) or Silences (Jacomo), its logical godchild.

The beauty of the chypre is that it's a strict fragrance structure, but on this basic scaffolding the perfumer can add accent pieces that make the perfume lean into this or that direction. Like a basic "little black dress", you can accessorize with heels or with boots, with pearls or with chunky gold chains, with a fur stole or a colorful velvet shawl and create dazzlingly different looks.

*Although Le Parfum de Therese by Edmond Roudnitska (circulating in the F.Malle line) has fruity elements on the basic skeleton of a chypre, it has been argued that it is in fact a proto-aquatic, therefore I do not include it in this category on purpose.

In the Michael Edwards classification system (inspired by Firmenich charts and his own consultant job in the industry), chypres fall mostly into the "mossy woods" category, as Edwards doesn't include a "chypre" family per se as per tradition dictates, but rather intersperses them between woods and orientals (and moving leather fragrances into the "dry woods" category in his 2010 edition following new studies in odor perception). It's one way of viewing things that is more accessible to the consumer.

If orientals have traditionally built on a rose floral nucleus to further create smoothness, chypres have been traditionally constructed around a white flowers core (jasmine, tuberose etc), with the all important lily of the valley "opening" the bouquet, just like uncorking a bottle of wine a few minutes prior to drinking lets the aroma develop better. Specifically the more traditional floral "core" was constructed around an impression of gardenia (Another Cypriot reference as the ripe, narcotic blossom grows well on the warm shores of the island). The classic reference for that is the original Miss Dior (from 1947), now circulating as Miss Dior L'Original.

Even though years have passed and chypres fell out of vogue in the 1990s and early 2000s, there was a renewed interest in them after Narciso for Her eau de toilette was introduced into the market in 2004 (launched as a youthful chypre) and became a modern classic that influenced every other house. Basically these fragrances, which I call "nouveau chypres" (read more on them on this article of mine) are NOT technically chypres, but "woody floral musks" fragrances, with a "clean" non hippy-shop patchouli and vetiver base standing in for the reduced ratio of oakmoss allowed by modern industry regulations in regard to allergens (oakmoss is considered a skin sensitizer and therefore greatly reduced, which accounts for the reformulation -and thus unrecognizable state- of many classics). These include Gucci de Gucci, Lovely by SJP, Guerlain Idylle and Chypre Fatal, L'Eau de Chloe, Miss Dior Chérie, Chance by Chanel and countless others. A few however do manage to smell credible such as the underrated Private Collection Jasmine White Moss by E.Lauder; although totally modern, it doesn't betray the genre and smells like true progeny. Issey Miyake A Scent is taking the greener, airier stance of green chypres.

Although the term "chypre" nowadays means little to nothing to the modern consumer, as attested by the countless questions I receive when consulting, the industry insists on keeping it. The soft pink shade of these modern juices does make us think of the soft powdery color referenced as "cipria". Femininity, softness, cosmetics and Aphrodite rolled into a modern packaging. Or perhaps it's because chypre has at least 4000 years of history behind it...

Related reading on Perfume Shrine: Perfume Primers for Beginners & Beyond

For those who read French, a wonderful essay on the origins of the Cypriot strain of Cipria and chypre on this and that link.  Also refer to "Aromata Cipria - Cyprus Perfumes" by. P.Flourentzos, M.R.Belgiorno, A.Lentini (dbas.sciant.unifi.it)