Olea Sancta: The Mysterious Alchemy of the Holy "Myhro"

Among the arcane fragrant mixes in existence, be it from antiquity or from more recent years, Olea Sancta (holy oil) is perhaps the most wide-spread and yet most elusive. This is the name given to what is commonly refered to among Orthodox Christians as "holy myhro" (though it's intricately more complex than simple myrrh, as you will see below); the scented oil used for the consecration of the Holy Chrism*, an annointing ritual of particular importance in the Orthodox Church as it is believed that the fragrant oil imparts the gifts of the Holy Spirit upon the converts, following baptism. As the Orthodox Easter is drawing closer and the heavy-toll, mourning sounds of the church bells outside my windows is resounding on Good Friday, I am reminded of the ritual of the manufacturing of Olea Sancta which takes place during the Holy Week at the Ecumenical Patriarchate in Istanbul, roughly every ten years. But Olea Sancta has ancient uses beyond catechism: it was used for the coronation of Orthodox kings and emperors and during establishing new churches, sprinkled on the Holy Abode. And it's also used (in heavy dilution alas, as I can attest) on Holy Wednesday, when people gather at the church to hear the liturgy and partake in the "ιερό ευχέλαιο" and be reminded of the unknown woman who bathed Jesus's feet and scented him with spikenard from an alabaster...The mystagogy during this ritual, with the lamenting sounds of the Byzantine tradition sung in the distance, is hair-raising.

This year is one when the "holy myro" was prepared once again and indeed the Olea Sancta εψήθη/ was "cooked" in the Fanari neighbourhood, in the courtyard of the Patriarchate under a specially designed canopy, which prompted this posting of mine. The preparation of the Chrism in the Patriarchate is carried out by the college of the Kosmētores Myrepsoí (Κοσμήτορες Μυρεψοί, "Deans Perfumers"), presided by the Árchōn Myrepsós, the "Lord Perfumer". The incumbent Archon Myrepsos is biochemist Prodromos Thanasoglou.

The materials going into the manufacture of the Holy Chrism comprise ancient herbs, exotic peels and essential oils, of which the most important is Bulgarian rose absolute provided by the Orthodox Church of Bulgaria.The components of Olea Sancta with different variations and additions appear in catalogs from as far back as the 8th century AD until the late 19th century. The inspiration comes from the description by Moses in the book of Exodus and the holy anointment oil began being manufactured crudely in the 2nd century AD. Initially the ingredients were 13, as named in a Berber Code from the 8th century. In 1951, during the tenure of Athinagoras Ecumenical Patriarch, the recipe was established as including 57 ingredients, each with its own mystical, symbolic use. 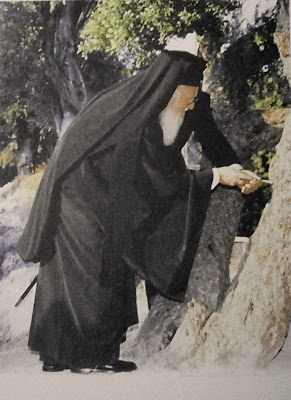 The "epsisis"(maceration) is just as intricate: it begins on Good Monday morning after Mass, when the basic ingredients of Chrism are sanctified during a special sequence, headed by the Ecumenical Patriarch. The sprinkling with holy water boilers, utensils and materials are sprinkled with holy water. Double and triple candlesticks are lit, illuminating each of the five boilers. The fire is fanned on wood coming from disfigured old icons only. Reading continues from bishops and priests who alternate at regular intervals.

The procedure follows the same standard layout on Holy Tuesday and Holy Wednesday, when the Oil now clear, is poured into a large silver urns, silver in small containers, as well as alabaster, then transferred to the Patriarchal Chapel of St. Andrew . From there on the morning of Holy Thursday the procession moves to the Patriarchal Church where 24 priests hold the 12 jars and 35 bishops hold silver and alabaster vessels while the patriarch who holds a silver bowl. During the liturgy the Chrism is consecrated. From then on, the Olea Sancta is ready to be safekept in the Myrofylakio, the "myro safe keeping" special reserve at the Patriarchate.

This fragrant tradition bears the mystery of old with every drop deposited on the forehead and the palms of the hands, remininding us that scent and man have travelled together through the eons.


*It is similar to one of the three oils used in the Catholic tradition, but there it is prepared with just balsam instead [the Catholic holy oils include Oil of the Sick ("Oleum Infirmorum") Oil of Chrism ("Sanctum Chrisma"), and Oil of Catechumens( "Oleum Catechumenorum"), of which only Chrism is scented, the rest being simply sanctioned olive oil]

Related reading on Perfume Shrine:
Joan of Arc and Egyptian Mummies Tied by Scent,
The Mystery of Egyptian Elixirs