I never cease to be amazed by the rich variety that both the natural world and the labs delving in organic chemistry produce for our olfactory delight. The nuances of some exotic materials feels eerily familiar, yet at the same time foreign, exciting, enigmatic, especially when encountered in a list of perfume notes in a given composition. Such is the case of Nargamotha/cypriol (Cyperus scariosus).

Nagarmotha/Cypriol (also "nut grass" in English) is a plant of the Cyperaceae family, alternatively called Nagar Mustaka, which grows wild in the Madhya Pradesh region of India. It belongs in the papyrus family (Cyperus papyrus is the one used during the apex of Ancient Egypt) and grows in damp places in Bengal, Sundarbans, and Utter Pradesh, but also in Australia. 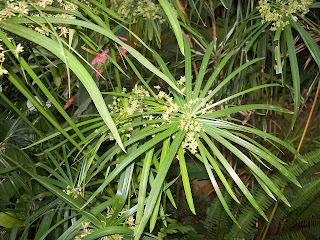 Highly-prized for its rhizomes, much like iris, cyperus scariosus is often used in compounding perfumes (especially since it acts as a fixative and is quite economical), in the manufacturing of soaps and incense sticks, as an insect repellent and for medicinal purposes. Associated with milkweed, Indian nard, jatamansi and fekhand, it appears in the spells of Vashikarana: It's said that a man applying it to his forehead is assured of a long series of successful love affairs!

Steam distillation of the tubers of cypriol yields 0.075-0.080% of an essential oil, the principal content of which is cyperine. The smell of nagarmotha is woody, earthy and quite lingering; it mostly conjures a hybrid between cedar, vetiver and patchouli, with fleeting touches of cinnamon and frankincense giving a churchy feel.

Tom Ford for Men was claimed to be the first to use cypriol: "that slightly dirty, sensual, sexy smell...It's not the same as natural musk used to be, but it has a bit of something that some people would think slightly dirty...I think it's warm and sensual." And yet Xeryus, a floral woody semi-oriental masculine by Givenchy, developped by Firmenich, launched in 1986! And if I am not too mistaken cypriol is contained in Eau d'Issey pour Homme too in as early as 1994.

Cypriol is featured in rather limited perfumes, but with the propensity to expand into more: There is a product by Innospec also called "cypriol" that gives the natural raw material a run for its money. According to Innospec itself (2008), Cypriol base hals a spicy floral fragrance and it was presented in a linden blossom room spray and peach base during the British Society of Perfumery symposium at Towcester, where it confered the rich, natural aroma of real flowers. "As well as offering good odour of its own, Cypriol [product] has a substantial floralising effect on any fragrance".Additionally, a new terpenoid extracted from the leaves of cyperus sclariosus promises new uses as well.