There is nothing more early April-like than the smell of bitter orange trees blossoming, their waxy white petals infiltrating the glossy green of the leaves and some fruit still hanging from the branches, like a reminder of what has been already accomplished. 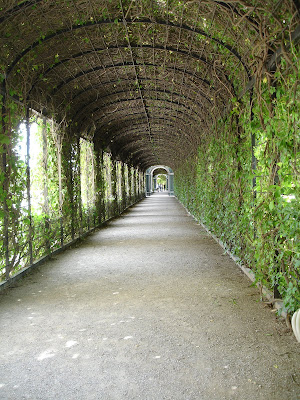 Guerlain captured the ethereal vapors of steam off these delicate, ravishing blossoms and married them to a pre-emptying summer jasmine (middle-ground indolic) and the faint whiff of cool frankincense burning inside a Greek Orthodox church preparing for the country's most devout celebration: Easter. The citrusy aspects of frankincense compliment the fruitier aspects of neroli. Musk in the form of synthetic Cashmeran is anchoring the effect on skin. Guerlain's Flora Nerolia (a part of the original line up in the Aqua Allegoria line in 2000 composed by perfumer Mathilde Laurent) is like a snapshot of late Lent in Greece and for that reason is absolutely precious to me.

Notes for Guerlain Aqua Allegoria Flora Nerolia:
neroli and petitgrain (citrus leaves & twigs) in the top, and jasmine and orange blossom in the heart. Frankincense for the base. 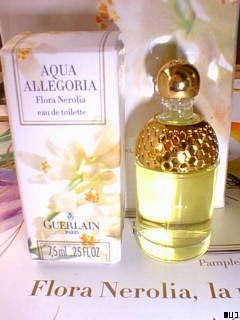 Lamentably discontinued (much like the rest of the original line-up composed by Mathilde Laurent) with the exception of Herba Fresca and Pamplune, Flora Nerolia can be sometimes found on Ebay.
The history, notes and short reviews of all the Guerlain Aqua Allegoria scents can be found on this link.

Background on the Photo (by anomieus/flickr):
As far back as the time of the dowager empress Wilhelmine Amalie an orangery garden was laid out at Schönbrunn which included a hothouse for overwintering bitter orange trees. In 1754 Franz I Stephan instigated the building of the Orangery by Nicola Pacassi, probably to designs by Nicolas Jadot. One hundred and eighty-nine metres long and ten metres wide, the Schönbrunn Orangery is one of the two largest Baroque orangeries in the world, the other being at Versailles. The south façade is articulated by an alternating series of large and smaller apertures with rusticated pilasters decorated with masks. The interior has a rhythmic sequence of shallow vaults and is heated by a hypocaust system. The Orangery served not only as the winter quarters for citrus trees and other potted plants but was also a winter garden used for imperial court festivities. Joseph II was especially fond of holding celebrations in the Orangery with festively-decorated banqueting tables, ranks of flowering plants and illuminations in the citrus trees. During a winter festivity in 1786 Mozart conducted his Singspiel "The Impresario" here.
The rear part of the Orangery is still used in its original function, while the front section, which has been renovated, is used for events such as the Schönbrunn Palace Concert series.
*Share with link: Friday, April 01, 2011