The Mediterranean basin could be described as one giant orangery during spring: the green trees, called bigaradiers, with their dense foliage of shiny leaves are seen sprouting small white blossoms; first, closed like Q-tips and then bursting into an orgy of fragrant flowers, emitting a sweet, yet delicate and fresh fragrance that travels long and far. These individual orangey trees belong in a unique order, bearing fruit still while at the same time blossoming! But you'd be hard-pressed to cut and eat that fruit; the orange-toned rind hides a very bitter flesh which is perfect however for proper marmelade or "spoon sweets". And they only turn their characteristic bright colour in the temperate Mediterranean climate: Spain, Greece, and also...California. Those growing in tropical climates, such as Florida or India or Ghana retain a yellow-greenish tinge. 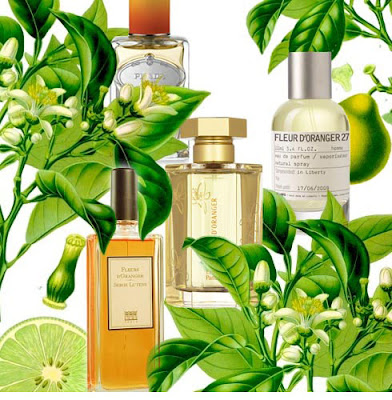 The amazing tree which produces those wonders of nature is citrus aurantium var. amara (or bigaradia), commonly referred to as "bitter orange tree" (Also known as "Seville orange tree" due to the fact that the romantic city by the river is choke-full of them and because it was the centre of Moorish culture when the trees were first brought into the region from Arabia in the 9th century AD). Perfumers call it by another name, grosser but more accurate in terms of "giving": the pig of perfumery. Every part of this tree gives a lovely material.

David Seth Moltz, the nose behind D.S. & Durga, the Brooklyn-based perfume company, explains it well: Cold-pressing the fruit peel yields bigarade, the essential oil of the bitter orange; distilling the twigs gives you petitgrain (keep in mind that the same method gives petit-grain from other citrus trees such as lemon petit-grain, lime petit-grain etc); and the orange blossoms provide you with neroli (neroli comes from steam distillation of the flowers) while the same flowers can yield orange blossom absolute when treated with solvents to extract their essence. Distillation is usually carried out in such a way that 1 liter(1 kg) of distillation water (orange flower water) is obtained per 1 kilogram of charged orange flowers. This method incidentally, yields on the average about 1 gram of neroli oil.
That's not all, though: Distill the leaves, twigs and flowers together and you have "petitgrain sur le fleur." But it's still not over yet: Petitgrain water absolute or eau de brouts is the equivalent of orange flower water absolute and is obtained as a by-product from petitgrain bigarade oil. It enhances the 'naturalness' of several other fragrances, e.g. jasmine, neroli, ylang-ylang and gardenia.

"This one tree," Mr. Moltz explains, "gives you a range of citrus, wood, flower and all that lies in between—clean, fresh, dark, spicy." It is, in other words, a tree worthy of obsession! [1] 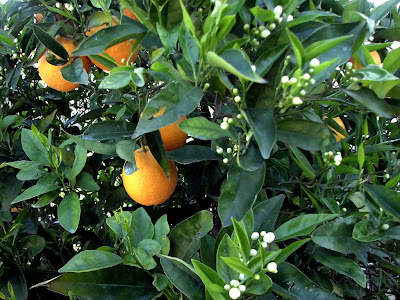 The differences in scent between the materials
Neroli has a sharper, more delicate aroma with a pleasantly bitter top note, a floral, herbal, green body and a floral, orange flower dry-out. It's lighter than the more overtly feminine orange blossom absolute which is more indolic and lusher, heavy and rich, warm, but also delicate and fresh, long-lasting odour, closely resembling the fragrance of fresh bitter orange blossoms. Its fragrance is not unlike that of jasmine, less intensely floral, but with a greater freshness. Petit grain is more bitter and has a masculine edge. And of course bigarade is the very flavour of morning marmelade.

List of fragrances to guide your nose through the raw materials

To experience bigarade the simplest means is to grab a jar of Bonne Maman marmelade and dip your nose and inhale: the sweetness cannot cut too much on the bitterness which leaves an almost sour aftertaste, resulting into an experience far removed from the more prosaic sweet orange or strawberry jam. Another, more perfume-oriented means would be to grab a bottle of Cologne Bigarade by Frederic Malle (composed by Jean Claude Ellena who excels into that sort of Mediterranean compositions) or his more concentrated and rubbery version with touches of cumin, Bigarade Concentree. Another alternative would be Creed's Citrus Bigarrade [sic].

Neroli has a romantic tale attached to its name: "In the 17th century, the princess of Nerola, Italy, used orange blossom to perfume her stationary, baths and, most famously, her gloves. As she gestured to her courtiers and lovers, a gentle wake of blossom must have trailed her hands. Now, neroli can be found in any number of perfumes, soaps and, according to myth, the secret recipe for Coca-Cola! It is the very essence of spring—that first bloom that promises sun and romance. And like romance, in the hands of a master perfumer, it can be heady or hesitating, sophisticated or innocent, sweet or dangerous. Mr. Moltz describes pure neroli as being "prim and proper." He likes to "dirty it up" with flowers that bring out neroli's wet and sexy vibe. [1] The major chemical components of neroli bigarade oil are: linalool, limonene, linalyl acetate, nerolidol, geraniol, and methyl anthranilate. Extraction of flowers with supercritical CO2 yields a neroli bigarade oil much richer in linalyl acetate (23%) than neroli oil obtained by water distillation. The content of methyl anthranilate (1%) is also significantly higher [2].
If you want to experience a soliflore neroli fragrance, try Annick Goutal's Néroli, a Parisian take on the Med idea . "The idea for Néroli was a warm wind blowing through a blooming orange grove," says Camille Goutal, the creative director after Annick's passing. "It was also inspired by a childhood memory: my uncle spent his holidays in Tunisia and would bring me back bouquets of orange flowers. Of course the main ingredient is the neroli, freshened by the petitgrain Paraguay (which is also tender and green) and petitgrain citronnier. The cypress and the galbanum bring a subtle woody note."
Chloé offers Eau de Fleurs Neroli for spring and summer, a fragrance which mixes an aromatic top with rosemary and clary sage with "clean" upbeat, contemporary notes of peony and white musk.

To get a good dosage of petit-grain, look no further than Miller Harris and Le Petit Grain. A unisex fragrance which brings on a garland of aromatics to boost the angular facets of the material, such as angelica root, tarragon, thyme and lavender. Refreshing due to its briskness, but not without its own depths thanks to patchouli and moss. 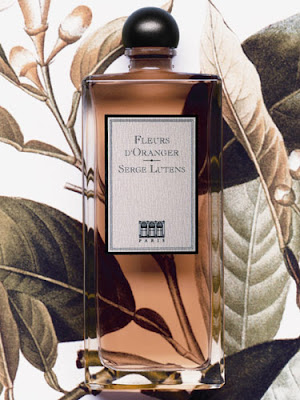 For orange blossom the choices are endless. You can check out several on our "Orange Blossom series" classified according to mood. But to recap some of the more characteristic:

Perhaps the loveliest and truest soliflore orange blossom rendition is L'Artisan's original Fleur d'Oranger harvest edition. Fresh, crystalline, projecting with needle-point precision but never too sharp, its melodious song is like a kiss on the lips from someone one had long longed for. The major drawback is it cost an arm & a leg and it was a one-time wonder, as the subsequent reissue from a few seasons ago is a little bit different.

Jo Malone's Orange Blossom cologne takes on a crisp but feminine interpretation of the flowers of the bitter orange tree: the composition is flanked by lemongrass and clementine oils on top (so that the fragrance retains a live-like freshness) and by lily and lilac notes on the bottom to soften and feminise it.

On the contrary Prada's Infusion de Fleurs d'Oranger [full review here] apart from a brief departure of orange flowers and neroli segues on into soapier arpegios with Serenolide (a synthetic musk), therefore being a less representative candidate.

Le Labo is one brand which features orange blossom at the heart of three of their fragrances: Fleur D'Oranger 27, (feminine with jasmine and sunny bergamot); Neroli 36, a playful mix of watermelon, salt, rose, mandarin and musk; and in Tubereuse 40, vibrating with the dynamism of tuberose, cedar, mimosa and petitgrain.

But perhaps the most majestic orange blossom absolute of them all is Fleurs D'Oranger by Serge Lutens. Far from being an orange blossom soliflore as its name suggests, this is a fragrance as beguiling as Salome dancing the dance of the seven veils. Upon each revelation, the anticipation heightens till the next one. The initial stage is one of soft orange blossom, in the words of Serge, the "strengthening of a breeze", hidding the more mysterious, invested interests in the background, emerging slowly like shadows from an orchard which suns itself somewhere off the Mediterranean coast. The accomplice in this is tuberose and its strange, wicked angularity creeps in beneath the shadows. But despite the fragrance's lushness and drama, it dries down to a delicate sweetness that resembles honeyed woman's skin; discreet and very, very sensual.

Last but not least the etymology is also interesting and quite mixed-up: The word orange (EN and FR), naranja (ES), arancia (IT) are all derived from the Persian naranj which in the contrary means bitter orange ("νεράτζι" i.e. nerantzi, in Greek), the place where the bitter variety of the tree comes from. The Iranians call oranges 'portoghal' which resembles the Greek word for sweet oranges, πορτοκάλι; to my knowledge, only in Greek among European languages has the Persian distinction been maintained. But how come the Greek call orange the ...Portugeuse fruit? (That's what the name means) It's because the Portugeuse traders brought sweet oranges into the Mediterranean basin from China centuries after the bitter oranges were brought to these shores...