Sharing the news a while ago on a second "model" of La Petite Robe Noire, a previous Guerlain fragrance that divided perfume enthusiasts, was a double-edged sword: On the one hand, one wants to like a new Guerlain, possibly because of the heritage and the luxe French factor. On the other hand, Guerlain lately have been reviving the brand in ways which have left a bitter taste in the mouth of hard-core fans, even though it garnered them new audiences and certainly a lot money in Swiss banks. La Petite Robe Noire no.2 has a problematic name to begin with, but that's not all. 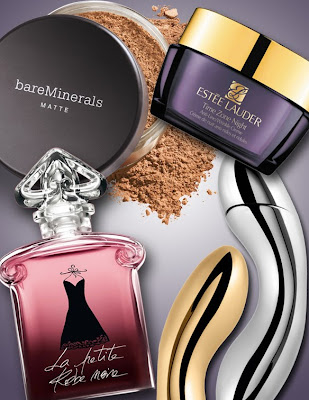 Just imagine having to answer someone asking what perfume you're wearing; that affix of "2" in the end sounds fake and ridiculous to me. I realise that copyrighting names isn't easy, but if anyone could, Guerlain is the one who could recycle hundreds of names from their rich archives to spare this embarrassment. Olfactorily, La Petite Robe Noire model 2 leaves something to be desired and I can't say it has won me over, although arguably it's rather easier and less tooth-achingly fruity-sweet than the previous first installment which scared me with its insolent intrusion into my personal space when I had placed a blotter atop my book on Minoan pottery I was consulting at the time.

To its detriment La Petite Robe Noire no. 2 still features the gimauve accord (that's the marshmallow "note"), this time garlanded by orange blossom and dusted with powdery-dry notes that are oscillating between face makeup and white suede. The opening of La Petite Robe Noire model 2, clean, scrubbed and bright, is still revealing a light gourmand character with a vanillic interlay that veers into almond nuances; but it's smoother, cuter and thankfully less berry-rich than the previous effort. The cuddly quality and the dry musky suede feel are not without some charm, better expressed on a blotter or fabric than on skin (Is this also an effort to grab the consumer into the first instances of testing?).

Still, these "hip" fragrant launches, destined by their shelf placement for the connoisseur circuit of people shopping for fragrance (and Guerlain fragrance at that!) at the eponymous boutiques or the Bergdorf Goodman "corner", pose a question: Why are they becoming a central focus requiring ample time off in-house Thierry Wasser's busy schedule instead of having these powers directed at working on a smashing new mainstream release or a beautiful classy exclusive instead (like Tonka Impériale before)? Unless teenager gamines shop regularly at the above mentioned places and are cognizant of the Guerlain brand apart from their makeup line and the Terracotta range (which still drives a huge percentage of the company sales), I'm at a loss to understand the positioning of those fragrances, just like I was perplexed by the romantic thinking behind Idylle as advertised on US soil. 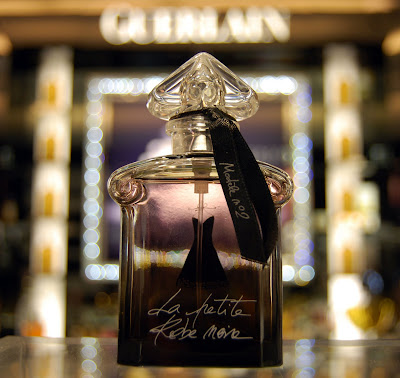 Apparently Sylvaine Delacourte, art director chez Guerlain, says the first La Petite Robe Noire sold well and we do know from the US launch ahead that the American audience was (oddly?) targeted mainly: The latter isn't anything new, even as far back as Chanel No.5 and Coty's bestsellers America has been the greatest luxury devouring market on the planet and justifiably a marketer's wet dream. Often they underestimate that market.
Still La Petite Robe Noire and La Petite Robe Noire 2 occupy that middle ground that is hesitant between donning a full on couture gown for special occasions or just everyday wear with hip accents for that party and end up smelling like they don't know what they're doing, raising their cocktail glass like the nouveau rich amidst family guests at a chateau in the Loire valley.

The bottle, still in the iconic inverted heart design that houses Mitsouko and L'Heure Bleue, is now reprised in dark rose and the black dress on it is strappy with a lacy hem; more like a negligee, really, but in good fun.