Perfume companies and their ad copy often end up confusing the consumer. Whether they do it inadvertedly or on purpose is to be examined. The point is several people raise questions: "Is amber and ambergris (i.e. grey amber) the same thing?" "Why is amber so sweet?" "Why do some ambers smell sweet while some smell savoury or even salty?" "Is it just me?" Let's disentangle the confusion. 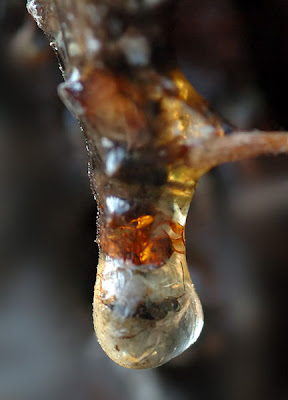 Amber and ambergris are two completely different things, at least in theory as several companies tend to mix the terms to great confusion.

Amber usually refers to a resinous mix, a medley of base notes (usually a specific mix of only three amply suffices, read our extensive article on the differences) with a sweet, almost powdery tone (smell Histoires de Parfums Ambre 114 for instance) and an oriental theme due to the very nature of the resins used which hail from the East. Hence the ~usually in French~ terminology/classification of orientalised perfumes as "parfums ambrés". For instance CK Obsession, Shalimar by Guerlain or Moschino by Moschino (the original) are examples of perfumes "ambrés"; they're warm, inviting, a little powdery, soft, cuddly, mysterious...

The concept of "amber" is in fact an olfactory convention of the late 19th century and became a perfume "genre" at that time with the invention of vanillin (synthetic vanilla, as known from patisserie to most of us) added to the time-honored use of labdanum.

It's interesting to note that the most common raw materials for creating an amber accord for most perfumers are labdanum (resinous substance from Cistus Ladaniferus or "rock rose", possessing a leathery, deep, pungently bitterish smell), benzoin (a balsam from Styrax Tonkiniensis with a sweetish, caramel and vanillic facet) and styrax (resin of Liquidambar Orientalis tree with a scent reminiscent of glue and cinnamon) with the inclusion of vanillin.
Since vanilla naturally compliments the sweeter facets of benzoin and since it's both considered a universal pleaser (especially so in the huge US market) and a semi-aphrodisiac (according to some perfumers' beliefs, notably Guerlain) it's used to boost the effect rendering most ambers quite sweet. Four notable examples of non sweet ambers, to escape that surypy effect, while still remaining "parfums ambrés", are Ambre Sultan by Lutens (the golden standard, mixing a pungently herbal top note including bay leaf and oregano), Ambra del Nepal by I Profumi di Firenze (using naturally cool and citrusy frankincense to put the sostenuto on amber), Ambre Fétiche by Goutal (drier than most thanks to Russian leather base) and Ambre Précieux by Maitre Parfumer et Gantier (beautifully balanced with aromatic top).

Ambergris on the other hand refers to the intenstines product of the sperm whale. Ambergris (also called "grey amber" and ambregris in French) is a substance that the wild sperm whale (Physeter macrocephalus Lin=P.catodon) regurgitates naturally, a sort of cetacean furball to cleanse its digestive track of remnants of indigested cuttlefish (quid beaks mainly). "Only, if you thought it was got rid of through the mouth, think again: it comes out the other end...[Kemp Chris., Floating Gold: A Natural (and Unnatural) History of Ambergris]

"It’s hard not to fall in love with ambergris. Here is a solid lump of whale feces, weathered down—oxidized by salt water, degraded by sunlight, and eroded by waves — from the tarry mass to something that smells, depending on the piece and whom you’re talking to, like musk, violets, fresh-hewn wood, tobacco, dirt, Brazil nut, fern-copse, damp woods, new-mown hay, seaweed in the sun, the wood of old churches, or pretty much any other sweet-but-earthy scent". [Kemp Chris., Floating Gold: A Natural (and Unnatural) History of Ambergris]


The ingredient is rather sticky and gelatinous like, like a fat lump of grey color at first; while when it dries it becomes harder like a fragile but hard resin. When it is fresh, ambergris has nearly no value because its smell is extremely fecal (like "scented cow dung") and it has no value for perfumery. But let it float on the ocean for some years and it gains a beautiful patina that famously chemist Gunther Ohloff described as “humid, earthy, fecal, marine, algoid, tobacco-like, sandalwood-like, sweet, animal, musky and radiant”. Other people have dscribed it as having the scent of  wood in old churches or Brazil nuts.

To Christopher Ash in Whaler's Eye (George Allen & Unwin Lts.1964, p.254): "It always reminds me of a cool English wood in spring, and the scent you smell when you tear up the moss to uncover the dark soil underneath".

"Nor indeed can the whale possibly be otherwise than fragrant, when, as a general thing, he enjoys such high health; taking abundance of exercise; always out of doors; though, it is true, seldom in the open air. I say, that the motion of a Sperm Whale's flukes above water dispenses a perfume, as when a musk-scented lady rustles her dress in a warm parlor. What then shall I liken the Sperm Whale to for fragrance, considering his magnitude? Must it not be to that famous elephant, with jewelled tusks, and redolent with myrrh, which was led out of an Indian town to do honour to Alexander the Great?" (H.Melville, Moby Dick, ch.20)


The process of production is usually non harmful to the animal; not exactly "whale vomit" as purpetuated, more of the equivalent of a furball which floats on the ocean for years.

If we are talking about ethically harvested ambergris as opposed to ambergris from slaughtered whales ( that goes through a man-made maturing process) it is tremendously rare. It was one of the most prized findings of sailors (There is a mention of it in the seafaring adventure film “Master and Commander: far side of the world” when sailors contemplate capturing a whaler merchant ship.)

Its greatest attribute is its capacity for rendering a composition rounder, especially in oriental perfumes or in floral compositions where it melds the notes into one and brings out their best qualities. It clings on to fabric too, through repeated washings even, becoming ever sweeter with time. Therefore it is prized for its fixative power: the ability to anchor more volatile notes and make them last.
Most commercial perfumes today use a synthetic substitute, because the real thing is so expensive.
Dior Dioressence used to use real ambergris back in the day. Eau de Merveilles by Hermes is suppossedly one of the few that contain some raw ambergris (debatable) , which is usually used in tincture form in perfumery due to its sheer potency. Creed is also insisting that they use real ambergris in their perfumes. Natural perfumers use beach harvested ambergris in some of their more exclusive or bespoke fragrances.


Natural ambergris doesn't smell sweet at all to me; in fact it's salty, almost dry, a little oily. A very different variant on sensual which I personally lean to with a passion. Smell Isabelle Doyen's L'Antimatière by Les Nez to get a feel of what natural ambergris smells like: it's choke-full.
[For a much more elaborate breakdown of the raw materials and perfume terms "amber" and "ambergris" as well as the synthetics used to replicate an amber note in perfumery you can read more on this link. ]

To revert to the confusion instigated by perfume companies, let's illustrate with some examples.
Some perfumes do use the term "amber" in their puramid notes to stand for "ambergris", Eau de Merveilles by perfumers Ralf Schwieger and Nathalie Feisthauer being a case in point in some online lists of notes. The fragrance smells saline, salty, almost briny, discreet, definitely not sweet. Prada's L'Eau Ambrée is another example along those lines: I had described the drydown as smelling of ambergris, of salty skin. Clearly not an "ambré" perfume in the sense described above! 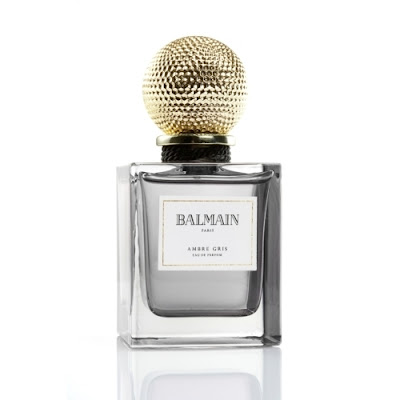 Balmain's Ambre Gris on the other hand does exactly the opposite: The whole ad copy is a marketing ploy based on the "myth" of ambergris:
« L’ambre gris, proche du mythe, un ingrédient rare et précieux à l’odeur somptueuse. » (While in fact the natural is very rarely used nowadays and only in very select, very expensive cases).
The scent itself is based on amber synthetics and is indeed sweet (typical cinnamon-vanilla accord). But the name and corresponding colour co-ordinated packaging work on the premise of "grey amber" and the elusive "pearl" of the sea: The cap is shaped like a huge South Sea pearl, its surface scattered with dots that look like Sevruga caviar "boules" from afar (thus further evoking luxury and the ocean), the colour scheme is greyish, mysterious, non bronzed oriental.

Perfumery is an intricate language that traps the mind into perceptions that trick the nose...

Resin drop trapping an insect inside via wikimedia commons, photograph of Ambre Gris by Balmain bottle via Stress & the Country