Whenever I break open a big, heavy pomegranate (Punica granatum), admiring the scattering of its brilliant, wine-coloured tangy-tasting seeds, I can't help but cast my mind to the myth of Persephone and Hades, the chthonian deities forever linked with this autumnal aromatic feast. Its name deriving from the Latin (pomum for apple ~meelo in Greek~ and granatus for seeded, resulting in the Italian melograno) reminds us that, like apples, this is another fruit that is forever associated with tales of darkness, corruption, death and rebirth. 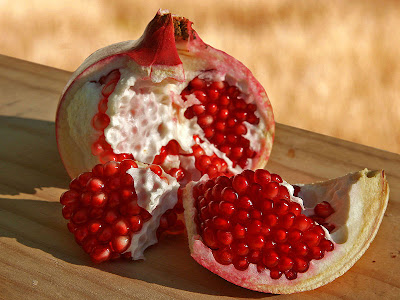 In Greek, pomegranate is called ρόδι (RHO-thee) which is extremely close in both sound and sight to ρόδο (RHO-tho, i.e. rose) ~indeed its proud russet colour reminds me of scarlet roses that hide thorns and shadows beneath their flamboyant beauty.

The pathways which introduced pomegranate to the Aegean were the same as the ones that brought the goddess whom the Anatolians worshipped as Cybele and the Mesopotamians as Ishtar (namely what became Aphrodite...). The cult of Persephone however (or Kore or Cora ~young maiden~, as she was celebrated in the Eleusianian Mysteries of ancient Greece along with her mother Demeter, the secret initiatory mystery rites of regeneration at Eleusis) traces a darker path of death and rebirth, the same path that nature seems to go through with the turning of the seasons. While Hesiodus in his Theogony considers her a daughter of Demeter (goddess of the harvest) and Zeus, other scholars ~among them Gunther Zuntz (1973)~ attribute the cult of Persephone to a continuation of Neolithic or Minoan Earth Mother goddess-worship. Walter Burkert includes that "reading" of this archetype in his definitive Greek Religion (1985). Mythology expert Karl Kerenyi went as far as to identify Persephone with the "mistress of the labyrinth" at the Minoan palace of Knossos in Bronze Age Crete (circa 1700BC)!

In ancient writers she is the parthenogenic daughter of Demeter, recalling shades of other deities who sprang through an immaculate conception, such as Athena and Jesus. The philosopher Plato on the other hand calls her Pherepapha (Φερέπαφα, from the Greek words φέρω ~to bring~ and επαφή ~touch) in his Cratylus, "because she is wise and touches that which is in motion". The Romans took the name from the Greco-cities of the Italian peninsula southernmost extremity as Proserpine (Προσερπινη, Proserpinē) and borrowed her cult as Proserpina. It is under that guise that Persephone inspired the artists of the European Renaissance, when classical antiquity was revisited with a vengeance. It is enough to cast our eyes to the paintings of the Great Masters such as Leonardo Da Vinci and Sandro Botticelli to admire the pomegranate into scenes of sunset-drenched beauty.

But perhaps the most popular myth concerning Persephone, the one that ties her with the autumnal crepuscule into winter and the flamboyant pomegranate, is the one about Persephone's abduction by the dark prince of the underworld, Hades or Pluto, brother of both Zeus and Poseidon: 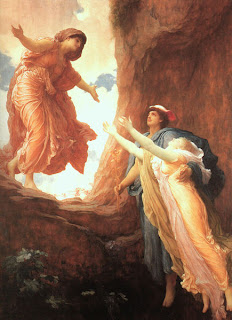 "As she was gathering flowers with her playmates in a meadow, the earth opened and Hades, god of the dead, appeared and carried her off to be his queen in the world below. ... Torch in hand, her sorrowing mother sought her through the wide world, and finding her not, she forbade the earth to put forth its increase. So all that year not a blade of corn grew on the earth, and men would have died of hunger if Zeus had not persuaded Hades to let Persephone go. However, before he let her go Hades persuaded her eat three seeds of a pomegranate, and thus she could not stay away from him forever. So it was arranged that she should spend two-thirds (according to later authors, one-half) of every year with her mother and the heavenly gods, and should pass the rest of the year with Hades beneath the earth.... As wife of Hades, she sent spectres, ruled the ghosts, and carried into effect the curses of men." (source: Encyclopedia Britannica)
The pomegranate became her inextricable tie with the world of the dead, the somber world of shadows. In a patriarchal reading of the myth, the abduction becomes the motif of marriage, the submission of the primordial female to the male, reminding us of the comparable survival of that theme in the Abduction of the Sabines tale by the Romans.
The demise of the earth-worshipping of the mother goddess in the now industrialised city of Eleusis, near Athens, is what inspired the Greek composer Manos Hatjidakis and Greek poet Nikos Gatsos to come up with this ritualistic lament named "Persephone's Nightmare" (sung by Maria Farantouri); its somber introductory bars of music a homage to the fragmented ancient classical Greek music:

"There, where mystics joined hands reverently
on entering the sacrificial site,
now tourists throw tab ends
and gaze at the new oil refinery.
Sleep Persephone in earth's embrace,
to this world's balcony come out no more" 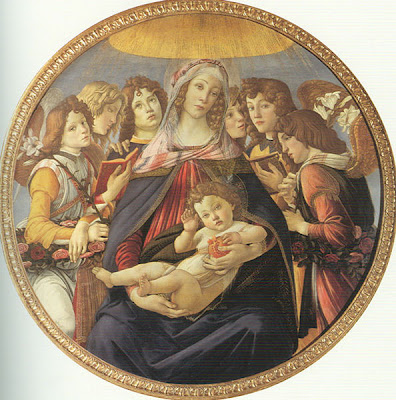 It is no coincidence that in today's Greek culture the offerings to which all participants partake in the Christian Orthodox memorials of the dead still consist of agricultural products, in the form of a sweet named κόλυβα (KO-lee-vah); made of boiled shredded wheat, cast sugar, various nuts and raisins and indeed ...pomegranate seeds! A small pagan homage to Persephone who sealed her fate by tasting the fruit of the underworld. It is assumed that like her, the connection of the dead with the living will be possible.
But it's also a reminder of the sweetness of the heavenly kingdom, the pomegranate being a symbol of the fullness of Jesus' suffering and his resurrection, finding its way into religious decoration liturgical vestments and hangings as well as art, such as this Madonna of the Pomegranate by Sandro Botticelli.
In a reverse case of exorcising the spirits of the other side, another Greek custom enacted on New Year's Day, demands that the first person to step into a home bringing the tenants luck (what's called ποδαρικό from the Greek word for foot, πόδι) crashes a ripe pomegranate with their right foot: the scattered seeds are respresenting the flooding of good things to come. Like the Qur'an says, pomegranates are among the good things the merciful God creates!

Fragrances with pomegranate notes are delightful for this time of the year when the fruit is in season: From the darkish, mysterious Pomegranate Noir by Jo Malone and the arrestingly unusual Grenates by Keiko Mecheri with its angelica running thread, to the more standard-fruity-juicy Euphoria by Calvin Klein and Tropical Punch by Escada, pomegranate scents run the gamut all the way to the incensy Melograno by Santa Maria Novella. The lists includes Moschino's Couture, the elegant Ferré Rosé, Tocca's subtle Touch and the spicy-cuminy oriental Aziyadé by Parfum d'Empire . Others yet reference the scarlet beads as grenadine: In Baby Doll by Yves Saint Laurent it is married it to complimentary bittersweet grapefuit, in Ma Dame by Gaultier it's used as a neon accent in a flashy composition and in Heiress by Paris Hilton, well...it alludes to her cocktails sipping activities, I guess.

Today pomegranates are cherished for their complex textural and aromatic nuances ranging from the peppery to the lightly tangy all the way to the nectarous sweet and for the bright juice they bring into several recipes: One of these embodiments takes the role of grenadine, the name of a fruit syrup popular in Gallic cultures, originally made from pomegranates (the French word for pomegranate being grenade), used as a cordial and in numerous cocktails as well as in a number of Iranian recipes. Hence also comes the name of one of the most majestic cities of Spain, the regal Granada! One of the most delicious uses of pomegranate syrup in cooking is in muhammara, a roasted red pepper, walnut and garlic spread consumed in Turkey and Syria, while the Azeri people of Goychay, Azerbaijan devote a whole festival to the fruit's charms drenching them in wine and dance. 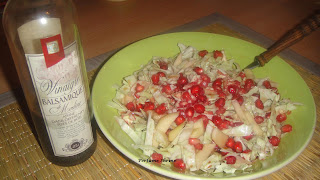 If you want to try pomegranates in an easy and aromatically titilating dish, I recommend you my personal recipe for Pomegranate Seed Salad:

You will need some young lettuce leaves (preferably bought when it's very cold so they "hold" and are crunchy), a peeled apple (I prefer Starkins), a heavy pomegranate, extra virgin olive oil and aceto balsamico di Modena.
Chop the apple in small pieces, wash and cut the lettuce leaves in thin slices in a plate and sprinkle over the two the pomegranate seeds, the ensuing juice that drips from the fruit. Finally drizzle the whole with olive oil and balsamico to your taste. Serves 2.
Extremely yummilicious, visually welcoming and quite filling!
Bon appetit!

Pomegranate photo via and painting of The return of Persephone by Fred Leighton and Madonna with the Pomegranate by Sandro Botticelli, all via Wikimedia Commons. Photo of Pomegranate Seed Salad by Elena Vosnaki (click to enlarge)
*Share with link: Friday, November 06, 2009