A while ago we had been thrilled by the choice of Charlotte Gainsbourg, shot by Steven Meisel, as the new face of the upcoming Balenciaga signature women’s scent, due out in February in Europe (March and April for Asia). Called Balenciaga Paris, it is the first fragrance authored by Balenciaga and Coty Inc., a partnership which began in 2008. 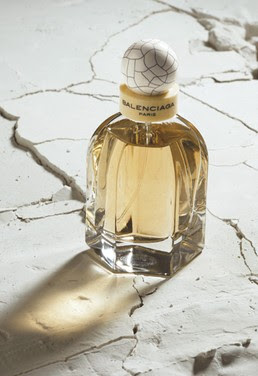 “We’ve been basically out of [the fragrance] business for almost 15, 20 years,” said Isabelle Guichot, Balenciaga president and chief executive officer. “It was important for us to wait until the right moment to really express ourselves back in the industry.” "The aim is to make Balenciaga Paris into a new classic", said Ghesquière and something tells me they're eyeing the uber-success of Narciso Rodriguez For Her in that regard, especially in view of the family in which they're positioning their scent, more of which below. The Balenciaga portfolio included excellent, elegant and distinctive scents (right down to the early 80s Michelle), making this a tall order. Despite the relatively restrained distribution (about 2000 doors worldwide) the expectations run to 90 million $ during the first year, so I would assume that the scent should reflect a wide acceptance potential, especially since Nicolas specified they aimed to reach a wider audience than the one they reach with their accessories.

Right off the bat, I should start by saying that regarding any name conflict which one might be thinking is afoot between the new Balecianga Paris and the classic YSL Paris from the 1980s, we shouldn't hold our breath: As discussed with my collaborator AlbertCan, YSL Beaute and Balencianga both belong to PPR (otherwise known as Gucci Group) which makes a legal case nonsensical as the compensation would come out of the same pocket. Additionally according to the Fragrance Foundation and Michael Edwards, YSL registered their own scent as "Paris d'Yves Saint Laurent" so "Balenciaga Paris" is probably marginally different enough to make the cut. YSL is busy promoting their own Parisienne right now, so the more Paris is heard in fragrance names the better. But enough about the name!

Balenciaga's house designer Nicolas Ghesquière took the plunge for the first time in fragrance launching aided by the young but talented perfumer Olivier Polge (Jacques Polge's of Chanel son) of IFF. The idea for the scent was mining on favourite smells Nicolas could think of and then arranging it in the "both artistic and mathematical process" that creating a scent is all about, according to him. His memory banks contained floor wax and flowers (violet and carnation), plus more urban odors, like gasoline, according to Caroline Javoy, group vice president of Balenciaga, Chloé and Jil Sander at Coty.

Ghesquière said he wanted to give the floral fragrance a contemporary “twist” with something urban and slightly “metallic.” Early on, it was decided Balenciaga’s first scent would be in the floral chypre family — specifically, a violet chypre. “Violet has been used in the fragrance industry for years, but normally more for the powdery effect,” said Javoy. “What Olivier did here was use the fresh, natural effect of violet leaves, and what’s new also is that the violet is really at the core of the fragrance.” Polge integrated redistilled woods, such as cedar and patchouli, too. “It is not a romantic floral,” said Ghesquière. “It’s definitely the mix of tradition and something quite contemporary and urban.” 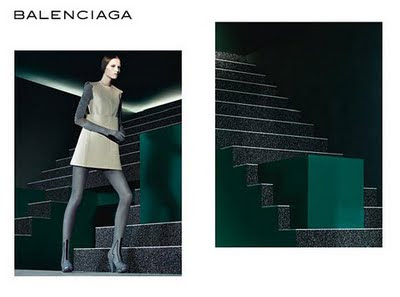 A violet chypre might recall Balmain's Jolie Madame, but I deduce we're not faced with such a deliciously old-fashioned prospect for various reasons having to do with tastes, focus groups et al. A propos the violet discussion, might I remind readers once again that violet as a note bears absolutely no similarity to violet leaves, as both the materials used to render them as well as the olfactory profile of the ingredients and the composed accords have very little relation, if at all. Violet leaves are par excellence used in masculine colognes for their cucumber-like green metallic freshness which shimmers most suavely in Eau de Cartier. In the ads for Balenciaga Paris, the left-hand color shot is a still life including the fragrance and a column and an egg, architectural and fashion references. In the right-side, black-and-white image, Charlotte Gainsbourg sits on a Spanish patio (alluding to Balenciaga’s place of origin), while the black-and-white marble floor is a nod to the original Balenciaga boutique design in Paris. The pattern of the prism on the bottle itself (alluding to the plinths and portals in Balenciaga boutiques) and the cracked egg effect on the cap (referencing Italian design from the 1980s, 18th-century enameled vases and the graphics of Balenciaga’s vintage fabrics; or a classic football ball, take your pick!) present themselves as vintage touches seen through the porthole of a modern creation. 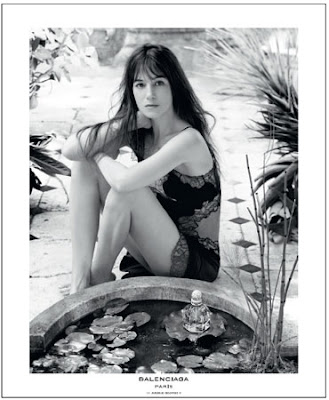 “White and ivory are two strong Balenciaga colors,” said Ghesquière. “I wanted this fragrance to be a little character. It has a head, a neckline and a body.” Balenciaga Paris’ streamlined outer packaging harkens back to the brand’s vintage boxes for fragrances (largely out of distribution), such as Le Dix.

Quotes & bottle pic from "Balenciaga Returns to the Fragrance Game" article by Jennifer Weil on WWD. Ad from the Spring 2009 fashions through fashionista.com
*Share with link: Friday, October 30, 2009