While I am sitting on my desk with the open window rushing in the fragrant air full with the blossoms of bigaradier and the trembling dew of spring on them, my elderflower cordial by my side, I am thinking of how this Good Friday reminds me of Good Fridays past, those of my formative years and the thoughts that accompanied them. 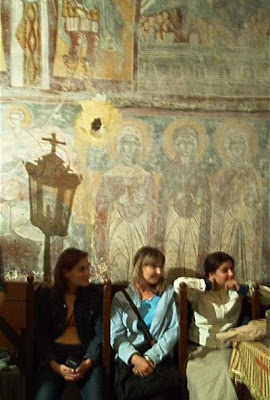 I recall as a teenager sitting on the old, wooden pew and smelling the luminous, Byzantine, old church. Not only the predictable incence smoking in the cencers; neither the peeling varnish off the old egg tempera icons, nor the slight mustiness of the corners of the rugs on the floor where feet slightly wet from the spring showers had walked on; not even the flowers garlanding the "epitafios", the symbolic deathbed of Jesus: lilacs and narcissi (it was a country church; in the city it's lilies and roses). It was the assembly itself emitting its own smell of humanity and through it all a familiar smokish vanilla with slight accents of the inside of an old leather handbag. The scent assaulted my nostrils with the vexing pang of unidentified familiarity. I couldn't place it...And then out of blue the realisation hit me like a ton of bricks: Shalimar! Some unidentified woman wearing that most carnal oriental, bronzy like the candelabras that burned over our heads bearing the history of centuries. It puzzled me...

Good Friday is traditionally a day of abstinence, often subsisting on nothing but bread and water. And yet, here there was a carnal scent reminding me of non spiritual matters on that day. This chasm between the spiritual and the carnal is at the heart of matter. If Orthodoxy is antithetical to the Protestant faith in embracing the most humane of our faults while at the same time not granting the forgiveness that is so tangibly accessible in the confessional of Catholisism, how is it even possible that the carnal is so much accepted? How can the pleasure of the senses subsist into the celebration of the celebral and the divine? 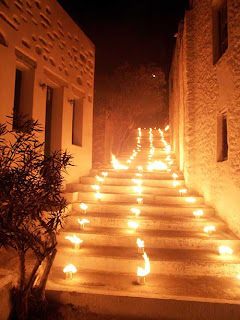 But the Pagan survival in almost everything involving the rituals I remember is omnipresent: The beeswax candles that drip on the sand trays where old people stick them decisively yet with trembling hands, the wine that gets spilled on the floor as a tribute to the power of mother earth, the fires lain on the street of the castello fortified villages on the top of the Greek islands and the purotechnics shot on Easter's Eve midnight with their sulphurous smell...And most importantly, the death of the young god whose resurrection in the middle of nature's releafing is the return of Dionysus.
When my steps in assorted historical pursuits later took me to "ascetaria" (places of hermites) the myrrh exuded off the craggy walls of the caves stopped me in my tracks with its beauty and its caressing of the senses. How a person who lived on faith and little else could emit such a strong smell of holiness, and on top of that how could this smell be so pleasurable? Isn't sanctity synonymous to refusal? The question bugged me for long and it lay hidden at a corner of my mind, peaking its thorny head from time to time when an occassionary excess of the flesh filled me with an unexplicable sense of sorrow and unfullfilment. How could the Dionysian and the Appolonian, the Cthonic and the Olympian, coexist in a single soul?

Years enriched me with experiences and my dreary feet took me to various places with spiritual connotations. To the Bangkok Buddist temples with their serene smoke and the colourful blanket of different races entering and leaving, their skins and breaths speaking of exotic fruits of far away origin and pungent fish-soup. To the Great Mosque at Cordoba, Spain where Muslims kneeled beneath the pointy minarets, their clothes and bodies bearing the scented traces of lives lived beneath shady patios where the jasmine vines grow rampant. To the mahleb and cardamom smelling bakeries of Istanbul preparing the yummy desserts of the holy days, bought by Christians and Muslims alike, and the street vendors on Boğaziçi Köprüsü selling salep and salty mackerels to ease the hunger of the tourists. To the foreboding Minster in Ulm, Germany, its vertical majesty evoking thoughts of awe, where people pin little prayers on the cork board beginning "Liebe Gott" and the aroma of Eau de Cologne on the hands of the waiters in the cafeteria across the square. 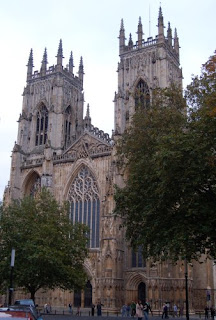 To the colourful vitraux of the York Minster, England, where the humidity of the soil and the sharp northern lights of the sky cannot hide the splendour of the roses blooming in the church yard and the women who stooped to smell them going out of the vesper service. To the modern synagogues of the East Coast of the US where kindly people share their cookies recipes in hushed whispers, whetting my appetite for culinary escapades upon returning home. And coming full circle, to immigrant familiar Greek churches in Melbourne, Australia, where the familiar, thick and smoky stench of Easter "lamb on a spit" roasting is never farther than a stone's throw away and where the whole street down the neighrhood is invited to the feas, no matter their adherent religion.

Because spirituality, I finally realised, is independent of religion and cannot be experienced if one has not first embraced all that this wonderful, this amazingly rich and truly wonderful life has to ferret: the good and the bad and the thorny. And the fragrant.

The kontakion "Ω γλυκύ μου έαρ" (My sweet spingtime) was written by Saint Romanus the Melodus in the 6th century AD and is the standard song of the Good Friday street procession throughout Greece.