Abdes Salaam is the Sufi name of Dominique Dubrana, a Frenchman living and working in Italy and creating all-natural perfumes that shatter every preconception you might have of what those entail. Even Luca Turin had to munch his hat his words upon the issue when he commissioned a bespoke fragrance simply tagged "Luca" (choosing rose, chamomile, carrot seed, sandalwood, tonka, benzoin and castoreum in a cunning, secret experiment to resurrect Elle, Elle by Lucien Lelong; which we surmiss was proven successful). Not to mention his being enthusiastic about others in the line in his Guide and in general ("His compositions just happen to be really good").

Two of Salaam's latest fragrances I sampled are like a breath of fresh, moist air amidst the cold, sleet and snow of winter: Morning Blossom and Samurai. 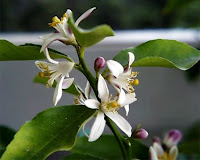 Morning Blossom is built around the noble essence rendered through steam distillation of the flowers of the Citrus aurantium tree (Seville orange or bitter orange tree) which is blossoming under the Mediterranean sun in spring: Neroli. This is the heavenly aroma that greets farmers as they begin another spring cycle and the one which puts me in a joyful, optimistic mood in the final long days of March when I gather the small white flowers to put in little glasses to aromatize the house with an uplifting dose of the coming spring. Discovered in the late 17th century and named after the princess of Nerola, in Italy, the relaxing pale yellow essence 'whose perfume, sedative and relaxing, keeps off from us all material concerns' [1] is weaving its own magic with every intake of breath.
The Morning Blossom fragrance by Profumo.it was initially developped for another line, but the deal wasn't sealed and the scent remained in the vaults of Dubrana who decided to go ahead and launch it himself. The inclusion of 25% neroli in it renders it exceptionally true to the essence with its tangier, slightly more bittersweet and thus "fresher" ambience as compared to the fruitier, smoother and overall sweeter note of orange blossom absolute. Morning Blossom develops in a sheer, gauzy way with a brightness that highlights a child-like joy at the world, yet without frivolity; instead with the slightly nostalgic wisdom of an older person in retrospect. There seems to be a garland of other floral notes of a white and non-white nature (some rose?) shooting through the greeness, a hint of the slight bitterness of petit-grain. The whole is resting atop a lightly woody base (with what I perceive as creamy sandalwood inclusion) kissed off with a discreet warmth that progresses into sweetness the more the fragrance develops on the skin.

(On a bare branch
A rook roosts:
Autumn dusk.)

The above haiku perfectly captures the mood which 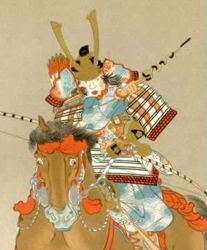 Samurai produces in me.
The composition is a more "civilized" version of Salaam's Oak Moss of the "Scents of the Soul" line, a collection of fragrances he has been composing in the last 20 years, presented in chronological order. Contrary to what you might imagine it of being a Japonesque Heike Monogatari fit for a modern noble warrior, Samurai was originally conceived for the "senatori" of the Italian Parliament in Rome. I guess that could stand for "noble warriors" in the service of the noblest body of all, the people, if only politicians were noble in the ancient Greek άριστος sense of the word or they really fought for ideals and making the world a better place; but I am probably digressing. Salaam kept the formula for his private business and it is now available to anyone who has a hankering for an excellent, refined and unisex cologne that features a healthy smathering of earthy vetiver and mossy notes with a whiff of sturdy woodiness. The classical composition reminds me of the elegance of Guerlain's Vétiver with its restrained sobriety but with a thicker base. The treatment of vetiver in its modern rendition of vetiver acetate is helping fragrances smell truly "modern". One would be hard-pressed to distinguish between a high-quality niche composition and this all-natural perfume if blindfolded, exactly because there is a very contemporary sensibility about it, opening vistas of a true mergence between the two divisions within the art which I personally applaud.
Men would be a natural contender for the charms of Samurai but women who do not feel the barrier of perceived expectancies of what they should wear are welcome to its beguiling and lasting allure. Samurai is versatile much like this eulogy: "Tadanori was a great general, pre-eminent in the arts of both sword and poetry."

Very generous "samples" can be ordered in mini flacons on the Profumo.it site. The mignon bottles of 5.5ml are practical as well as cute, as they allow several wearings for anyone to fully appreciate the composition before proceeding into investing in a bigger bottle, usually available in either 16ml (about half oz), 30ml/1oz or 50ml/1.7oz. There are also ready-made packages of 8 mignons, each allowing for a diversified experience, but you can pick your own selection of 6 in a wooden box.

I will leave you with a quote of Salaam himself that I find genuinely dreamy: "A natural perfumer leaves behind himself a “sillage” like a river, he is in love with perfumes. They are a joy to his heart and sanity to his mind." [2]

Pic of bitter orange blossom via Profumo.it. Painting of Minamoto Yoritomo from the 19th century, courtesy of geocities.com/azuchiwind
*Share with link: Saturday, December 27, 2008