If the description "Godzilla floral" doesn't scare the horses, perhaps the addendum "Guerlain decided this thing should not even try to be classy and has embraced it as the most deliciously vulgar perfume on the market today" could. But before making hasty assumptions that the above words of Luca Turin are meant derogatorily (they're not), wait for it: Insolence in Eau de Parfum, much like the previous Eau de Toilette incarnation, is seriously good and reminiscent of the Guerlain lineage in all its violets glory. Even if it's wearing a lilac dress illuminated in neon, it doesn't brush shoulders with the highlighter pens of Gaultier's latest, Ma Dame. Which is a good thing. 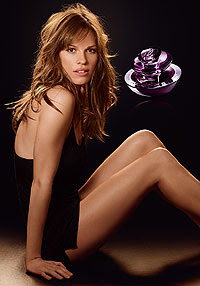 Guerlain would want us to think it's "created for an eccentric and chic woman, who thrives for perfection". Insolence Eau de Parfum is certainly eccentric if eccentricity can be defined in etymological terms: έκκεντρος from which it derives means "out of center" in Greek. Insolence Eau de Parfum therefore arrives as a skewed, even more intense, intoxicating brew in a purple-coloured twin of the Serge Mansau dishes-in-the-kitchen-sink bottle for the Eau de Toilette, itself no shy violet! Maurice Roucel has been working on violets intently lately, masterminding the earthy intrigue of the unisex Dans tes Bras for Frédéric Malle, full of salicylates and Cashmeran to give diffusion and emollience to what would have been the harsh nail-polish remover and hairspray accord that he first used in the Eau de Toilette version of Insolence.
Violets, often married with roses, as in the embulient romantic Paris by Yves Saint Laurent, have provided the intriguing conspirator in perfumes of variable constituents and antithetical moods over the years: the feminine playfulness in tutus in Malle's Lipstick Rose and Drôle de Rose for L'artisan Parfumeur, the magical realism element in Alice in Wonderland by Konstantin Mihov's Parfums d'Imperfiction, or the astrigent leather and tweeds of Balmain's Jolie Madame. And in the case of the Guerlain house violets have been a sine qua non: from the brief inclusion in the cassie and heliotropin wonder Après L'Ondée to the delectable pastilles resting on amber in Guet Apens/Attrape Coeur and Vol de Nuit Évasion all the way to their makeup product Météorites; in turn lending its star-struck name to a violet-infused potion of limited edition that mimics that softly powdery feel of their pastel-coloured spheres of delight. When Insolence Eau de Toilette first came on the market a few years ago it had elements of the above and L'Heure Bleue (or Farnésiana?) as well, making me pronounce it the first step in the right direction for the Guerlain mainstream line in a long time.

For Insolence Eau de Parfum the composition is resting atop the familiar sweet violets with subtle iris accents and enough of the red fruits tartness of the previous Eau de Toilette to which Roucel allegedly added tuberose, orange blossoms and peppery greens. You would be hard pressed to seperate them however and there is a gourmand quality which according to Albert might hark all the way back to Angel. The initial impression is even sweeter and more powdery on top rather than at the base compared with the Eau de Toilette, linear and without the initial flou and Aqua-Net note of the latter, which I admit I was not opposed myself. Constrasted, the two come off as sisters, but with the younger being more sensual and exhibitionist, the older a little more neurotically appealing and with the powdery progression reversed. Both are fronted by Hillary Swank in the print ads.

Summarising the Eau de Parfum is more approachable if you're into big, loud, sweet florals, quite close to Météorites indeed, with a liquorice flavour woven into the body of the fragrance resulting in a sci-fi rococo. Exceptionally long lasting too, wittily compared to the half life of uranium, therefore judicious use with the spray is highly recommended.
Although it was another fragrance that has been tagged as "a violet hit by a meteorite" recently, Insolence Eau de Parfum gives me the impression it has been circling eccentric orbits around a black-hole-sun since forever.