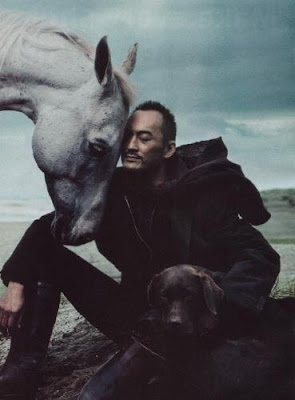 It would not be an overstatement to say that the “library” comprised of Frédéric Malle edited tomes of olfactory literature is one of the most stimulating lines in modern perfumery. Now perfumer Maurice Roucel gives us another volume to gnaw our teeth on, Dans Tes Bras (In Your Arms). Their previous collaboration on Musc Ravageur (2000), a best-selling vanillic oriental that despite the name has more of a pronounced spicy, sensual accord than the musky effluvium of a warm body à la Muscs Kublaï Khän, managed to entice even those afraid of the risqué intimacy of the latter.


“The deep and lasting odor of warm skin, with all of its salty hints and rich overtones. A fragrance carved with hefty chunks of cashmeran, sandalwood, musk and patchouli, reinforced with salicylates and incense, softened with heliotrope, colored with a violet accord. An intimate but deep sensuality, an exalted skin scent, the real essence of the perfume”.

Dans Tes Bras communicates seduction and generosity in an amalgam of masculine-like nuances simultaneously clean and dirty, like a man confident of his prowess enough to show a tender side as well.

The habitually damsel-like violet note is treated here as an unforeseen touch of freshly turned soil with the merest sprinkle of powderiness due to heliotropin, the unifying element with Roucel’s much sweeter and tartly fruity Insolence Eau de Toilette, its hairspray-opening and all. Green bittersweet patchouli and abstract woods create a bodily landscape of earthy delights which blooms with every passing minute. I do not significantly perceive frankincense smoke, even though it is there, while Six’s impression of fields of mushrooms is another image for the wet undergrowth that arrested my perception: favorably. The creamy, discreetly musky summation stays poised on skin for hours radiating warmth. In sum Dans Tes Bras makes me yearn to don a pair of breeches and trudge along bucolic sceneries of still humid, autumnal beds of decaying leaves accompanied by roborant company.

Maurice Roucel, an autodidact starting at Chanel’s Fragrances Laboratory in 1973, is a sensuous aesthete, with streamlined formulae as his signature evident in such marvels as 24 Faubourg, L de Lolita Lempicka and the missile-in-the-air Insolence. It is therefore of great interest to see how he proceeded with Dans Tes Bras.

Violet, a symbol of ancient Athens where it was used in scenting wine and Napoleon Bonaparte’s favorite flower, is a complicated matter in perfumery for two reasons: First the natural extract of viola odorata (sweet violet/English violet), although it exists, is rarely used for reasons of cost and versatility. Secondly because there is a distinction between violet flower and violet leaf: the two have a world of difference in terms of odor profile, but that’s not always clear in fragrance descriptions. The flowers have a sweet, powdery ~and when fresh slightly spicy~ note, while the leaf is earthy, green with a cut-grass feel.

The symbolism of violets as emblematic of death at an early age is apparent in the John Everett Millais painting "The Death of Ophelia" and violets which stood for constancy or devotion were traditionally used in mourning. Most people however associate violet with Parma Violets, a violet-flavoured confectionary manufactured by the Derbyshire-based company Swizzels Matlow; or alternatively, depending on cultural memories, with Violettes de Toulouse, violets preserved by a coating of egg white and crystallised sugar still made commercially at Toulouse, France. These tender, playful associations might account for the popularity of several sweet florals in the market, such as Drôle de Rose, Lipstick Rose and indeed Insolence.In violets along with terpenes, a major component of the scent is a ketone compound called ionone, which temporarily desensitises the receptors in the nose; this prevents any further scent being detected from the flower. Ionones were first isolated from the Parma violet by Tiemann and Kruger in 1893. The discovery of ionones enabled cheap and extensive production of violet scents, cataclysming the market with inexpensive violet colognes which became au courant. The ionones palette ranges from the scent of fresh blossoms to mild woodsy sweet-floral tonalities, while methyl ionones possess a stronger woodsy nuance, similar to iris rhizomes, binding woody and floral notes perfectly such as in the masterful Lutens creations Féminité du Bois and Bois de Violette. And let’s not forget that Roucel was the composer of the mournful, cooly wistful Iris Silver Mist for Lutens focused on the nitrile Irival too!

Violet Leaf absolute on the other hand smells herbaceous with an oily earthy nuance and naturally includes salicylates, more on which below. Octin esters and methyl heptin carbonate are used to render the floral green violet leaf odour with watery accents of melon and cucumber, customary in many modern masculine fragrances and the family of fougères (an aromatic group based on the accord of lavender-coumarin-oakmoss). It also gave the older version of Farhenheit its distinctive feel. If you want to get a good impression of violet leaf in a contemporary composition, smell Eau de Cartier. Several of the greener violet fragrances in the market such as Verte Violette by L’artisan or La Violette by Annick Goutal explore those aspects.
In Dans Tes Bras the tone comes from Iraldeine, a base that helps recreate the freshness of violet flowers. The aromachemical α-n-methyl ionone became commercially available around 1935 in Haarmann & Reimer's Iraldeine Alpha rein and Givaudan's Raldeine A (the main constituent of Fath’s legendary Iris Gris) which Ernest Beaux ~good friends with Leon Givaudan~ is said to have included in 25% concentration in the long-lost Mademoiselle Chanel No.1 from 1942-1946 (as analysed and publicized in 2007 in Perfumer & Flavorist magazine). 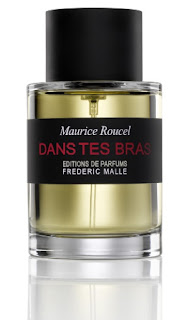 Benzyl Salicylate (benzyl ortho hydroxy benzoate) is an almost colourless liquid that has a mild balsamic, sweetly floral note possessing excellent blending capabilities. Often used as the foundation for heavy florals such as ylang, gardenia, jasmine, lily etc., it is also used in functional products such as soap, shampoo and fabric softener. Along with Methyl Salicylate, salicylates “turn the most banal floral composition into a real perfume, with majestic weight and sweep” divulges Luca Turin. However some people are anosmic to it, including some perfumers. Guy Robert could not smell benzyl salicylate at all, but could instantly recognize its presence in perfume: “I recognize it as if it were a friend seen from behind in a crowd, by the cut of his shoulders”. Indeed in the words of nose Bernand Chant “it produces a diffusing, blooming effect very pleasing to the public”. Many orchid fragrances are built on salicylates, while the mysterious emerald glow of the vintage Je Reviens is also due to them. Coupled with eugenol and isoeugenol, the effect becomes almost carnation-like with its clove tint. The magic of benzyl salicylate can be best experienced in the archetypal floral bouquet of L’air du Temps featuring an overdose of the ingredient. Its progeny included Wind Song, Norell, Estée, Charlie, even Angel! However the recent restrictions on the use of benzyl salicylates have taken their toll on many floral fragrances, L’air du Temps included, which simply do not smell as they used to.

Finally Cashmere Woods or Cashmeran, a favorite of both Roucel and Malle, is a IFF patented, complex aromachemical that provides a beautiful, velours note with diffuse nuances of earthy-wood and spicy notes (pine, patchouli), fruits and flowers (heliotrope, red fruits, apples and jasmine) and is softly musky-vanillic, entering Dans Tes Bras at the appropriate dosage. It's featured in Ysatis, Amarige, Michael, Lacroix Rouge, Perles de Lalique, Beautiful Love and many more.

Dans Tes Bras is thus an excellent example of a fragrance in which analysis makes for much better understanding and appreciation.

Dans Tes Bras has been available in Europe since September ’08 and will become available in the US this coming October, in Eau de Parfum bottles of 50ml/1.7oz and 100ml/3.4oz through the appointed select doors and the Editions des Parfums site.