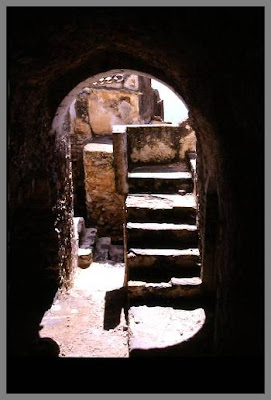 Upon smelling frankincense tears slowly being burnt on charcoals in an old bronzy censer, aromatizing the air with their otherworldy smell, I never fail to be transported in a mirage, similar to the one that Serge Noire by Lutens is evoking: Smoke is rising in the air of an old, byzantine, Orthodox church, the bright light coming fragmented in colourful snippets of reds and yellows through the panelled windows; old beeswax dripping heavily on the trays with sand on which pious old women have pinched their candles, each burdened with a prayer for the soul of a loved one; antique gold chandleriers are hanging heavily from what seems like a thread over wooden pews bearing the double-faced eagle of Byzantium carved in their backs, like an eidolon; visions of brides and grooms who have stood before the altar, erect and proud, crowned according to Orthodox canon with wreaths of silver, like royalty; the hushed lone whisper of someone who has seeked solace from the unrelenting heat of a bright summer's noon into the cool marbled-floored abode.

These are not manifestations of faith or religiousness on my part, rather the spirituality which seeks the opportunity to come out upon inhaling the fragrant remnants of smoke, stucco-ed along with the old egg-paint frescoes of the saint and the martyrs on the walls. And the pyrotechnics of myriads of Easter midnight celebrations, when the sky bursts forth with all the colours of the rainbow and the intense noise of fire-crackers that exorcises the evil spirits in a pagan atavistic nod which is so intrisically ingrained into the customs of this particular little corner of the world. Darkness and Light...

Exilde for ever: Let me morne
Where nights black bird hir sad infamy sings,
There let me live forlorne.

Downe vaine lights shine you no more,
No nights are dark enough for those
That in dispaire their last fortunes deplore,
Light doth but shame disclose

Incense in general has this almost Pavlovian quality of invoking a feeling of serenity, sadness and almost perverse elation in me.
Frankincense came into the scene of niche cults with the "Incense series" by Comme des Garcons and Passage d'Enfer by L'artisan parfumeur years ago and although it seemed it languished for a while, it knew a resurgence last summer with Andy Warhol Silver Factory by Bond No.9, an arguably interesting take and with Andy Tauer's wonderful duo of the austere Incense Extrême and the sunny Incense Rosé this past autumn.
However Serge Noire has been one fragrance lately which has managed to include every aspect of my ignus fatus, replete with the power to obliterate every other thought during its slow and lasting denouement on my skin. I had posted some earlier thoughts based on confidances by friends who had whetted my appetite but my personal, intimate relationship with Serge Noire has been a revelation.

The name derives its lineage from history: In the 19th and early 20th century, the name (la serge, feminine hence the "e" in the adjective "noire") designated a type of textile, twill of diagonal lines or ridges on both sides, made with a two-up, two-down weave, that was quite popular: a delicate variety was used for finer garments, while a stronger yarn was chosen for military clothes. The etymology derives from Greek σηρικος (σηρος means silk worm, for clothes), which gave rise to the Latin serica and the old French serge.The interesting thing is that serge has been implicated through the British textile trade monopoly via Calais and the Netherlands in wars between European nations, especially religious ones: in 1567 Calvinist refugees from the Low Countries included many skilled serge weavers, while Huguenot refugees in the early eighteenth century included many silk and linen weavers.With that at the back of our minds we might start deciphering the enigma of Serge Noire.

Initially dry and spartan with the flinty, camphoreous aspect of gun powder comparable to Essence of John Galliano for Diptyque, ashes to ashes and snuffed out candles, Serge Noire by Lutens assaults the senses with the intense austerity of real frankincense and elemi. The impression is beautifully ascetic, hermetic, like an anchorite who has dwelled in a cave up in the rough mountains with only the stars as his companion in the darkest pitch of the night: the "noire" part is meditatively devoid of any ornamentation, eclipsing any pretence of frivolous prettification. The surprising transparency is evocative of the Japanese Kodo ritual rather than the denser cloud of Avignon. Those who are unitiated to the wonders of Lutens might coil away with trepidation and apprehension at this point, but much like the alarming mentholated overture of Tubéreuse Criminelle, this subsides eventually, although never quiting the scene completely. 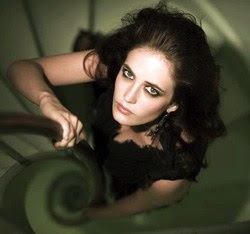 And yet behind the caustic and mineral masculinity, a hopeful ascent of a feminine trail of lightly vanillic, ambery benzoin and sweet spice is slowly, imperceptibly rising after half an hour; like a subtly heaving bosom draped with Japanese garments or the curvaceous calligraphy of thick black ink on gaufre paper of ivory or creamy skin. It is then when cistus labdanum provides an erotic hint of sophisticated elegance in Serge Noire while the emergence of sweet spice, a touch of cinnamon, gives a burnished quality of black that is slowly bleeding into grey.
The ashen ballet in the flames, the swirls of oriental grey sing an ode to everlasting beauty, beauty under the cover of night's rich plumage.

Elements that have caught the imagination of Lutens and Sheldrake in the past (the camphor in Tubéreuse Criminelle, the ink in Sarrasins, the incense of Encens et Lavande) are merging here in what seems to be a personal declaration of faith. Rumoured to have been in the works for the past 10 years during the tenure of Chris Sheldrake at the Palais Royal, it has the seal of favouritism by Lutens himself, which makes it a personal token of identity.
I am hereby claiming it as mine as well: This is one of the best Lutens releases of recent years to be sure!


Serge Noire comes in 50ml/1.7oz Eau de Parfum Haute Concentration for 95 euros in the oblong bottles of the export line (with optional spray mechanism included) and has just launched exclusively for the Palais Royal premiere, to be then distributed by the licensed distributors from September 08.

You can read an interesting article on the Lutens genius in French in Le Point.