How does the latest Serge Noire by Serge Lutens smell like? 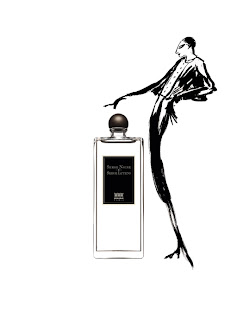 Serge Noire, the export fragrance of Lutens for this summer (July 2008) derives its lineage from history: In the 19th and early 20th century, the name (la serge, feminine hence the "e" in the adjective "noire") designated a type of textile, twill of diagonal lines or ridges on both sides, made with a two-up, two-down weave, that was quite popular: a delicate variety was used for finer garments, while a stronger yarn was chosen for military clothes. The etymology derives from Greek σηρικος (σηρος means silk worm, for clothes), which gave rise to the Latin serica and the old French serge.
The interesting thing is that serge has been implicated through the British textile trade monopoly via Calais and the Netherlands in wars between European nations, especially religious ones: in 1567 Calvinist refugees from the Low Countries included many skilled serge weavers, while Huguenot refugees in the early eighteenth century included many silk and linen weavers.

With that at the back of our minds we might start deciphering the enigma of Serge Noire and its reputation of an ascetic incense, according to my confidante Elisabeth. Quite taken with it, she discussed it at length with Serge, who explained that it is very different from Encens et Lavande, the previous sumptuous and fantastically deep frankincense take in the exclusive Palais Royal line.
Since there is often a double interpretation of the same material in both exclusive and export lines, it is not unheard of that there would be an incense scent in the latter. After all there is indeed a lavender one to match Encens et Lavande, Gris Clair, so why not one to address the other constituent of the fragrance as well?

Frankincense came into the scene of niche cults with the "Incense series" by Comme des Garcons and Passage d'Enfer by L'artisan parfumeur years ago and although it seemed it languished for a while, incense knew a resurgence last summer with Andy Warhol Silver Factory by Bond No.9, an arguably interesting take and with Andy Tauer's wonderful duo of Incense Extrême and Incense Rosé this autumn.

Serge Noire comes to offer an architecture of incense that is pure and balanced with nothing in excess, yet not classical. Rather an orientalised grey, which in itself is a play on his previous Gris Clair. It has a ritualistic element, without the cold, dark church associations we have come to expect from the genre. It is on the contrary reminiscent of fireworks and powdery dry, laced with spices which will dare our conventional beliefs on incense fragrances.

My French blogger friend Six, on Ambre Gris, equally ecstatic, talks about resinous, warm and slightly sweet, vanillic benzoin joining the proceedings, giving a feminine element to the masculine character, while she notes that pepper and a camphoreous note open up the intriguing composition of dry and bitter japanese-like incense with smoky and mineral tonalities echoing Chinese ink, flanked with a little cinnamon. Elements that have caught the imagination of Lutens and Sheldrake in the past (the camphor in Tubéreuse Criminelle, the ink in Sarrasins, the incense of Encens et Lavande) are merging here in what seems to be a personal declaration of faith.
Elisabeth confirmed that Serge Noire is near and dear to Serge's heart, name nothwithstanding, as he professed it to be his favorite; feeding thus the rumor that it has been in the works for 10 years and hinting that those who have professed it one of the best Lutens in recent years must be right.

So to recapitulate notes for your ease: camphor and pepper, dry incense and ashes, fireworks and gunpowder, sweet benzoin, cistus labdanum, castoreum and a little cinnamon. Got it? Sounds fantastic!

Lutens himself in a lyrical description consistent with his previous cryptic "poems" about his fragrances states concerning Serge Noire:

"An ether of ashes, it's about serge. A way of creating for myself a bad reputation with added value" [...]"A phoenix, the mythical bird of legend burns at the height of its splendour before emerging triumphant, reborn from the ashes in a choreography of flame, conjuring the shapes of yesterday in a dance of ashes. The swirls of oriental grey enrich the twilight with depth and intensity while windswept memories hint at the beauty of transformation. An ode to everlasting beauty under the cover of night's rich plumage"

There is some discrepancy between English and French press release which is intriguing to contemplate: In the French text there is the addition of a controversial affirmation of the fragrance creating a visual contrast between white skin and black cloth, intended for ethereal beauties ("Pour vous belles éthérées! Peaux blanches et serge noire...")
Political correcteness never fit well with Lutens and the phrase despite its connotations cannot be taken at face value, I reckon: I am sure he was focused on the aesthetic choice of chromatic antithesis and not on any racial slur hinted. To me it is more evocative of "The Pillow Book", black calligraphy on light-toned skin, tragically romantic in its unattainable ideal. 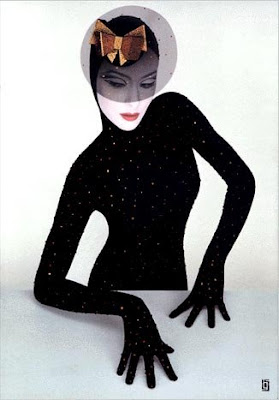 The Lutensian feminine ideal is japonified, lean and ascetic in her black garb, a woman of neither here nor there, of no time and no place; she almost becomes inhuman in the attenuation of her form and features to the point she becomes pure art. However every one of his creations bears inside the sperm of this ideal, which caresses our dreams and imprints our thoughts.
Black takes the emblematic scheme of a non-color: it serves as protection and amunition. But also as the symbolic anonymity of the monastic cloth which invokes an inner transformation, a metamorphosis of the spirit and which imparts its truth to those who opt for it.
Serge Noire will be the darling fragrance of everyone seeking to embrace their inner anchorite. Count me in!