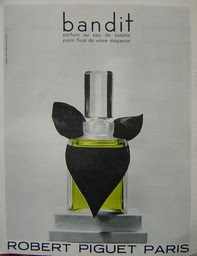 It was 1944, when WWII was at its most crucial stages with the battle of Monte Cassino, the fall of Rome to the Allies, the maiden flight of the Bristol Brigand and subsequently D-day that Robert Piguet had sent his models down the runway brandishing knives, toy revolvers and masks like highwaymen, like outlaws. And it was this occasion that prompted Germaine Cellier to grab the models’ knickers after they had walked the catwalk, reputedly studying their scent in an effort to “capture the best of their femininity” for the couturier’s first foray into fragrance. Whether she did and how one defines femininity in the first place is food for thought.

Cellier herself was outwardly conforming to all the perceived ideas of it: beautiful, slim, blond and tall, she exuded an air of elegance. Yet her reputation was tinged with shades of unconventionality and homosexuality and her creations were aiming to reflect different perceptions of Yin and Yang. Fracas was made for the femmes, Bandit was for the dykes.
In those times of closeted sexuality, these were hints that never left the inner sanctum and remained under wraps. Today it is a matter of playful reversal of roles, when women are freer with their sexual identity and image and are conscious of how they can juggle both sides. In saying that however I realize that both of those sides are dark and dangerous and not to be trifled with: both Fracas and Bandit pack a punch and are smirking with the knowledge of their own sinister powers. To Fracas’s torrid tuberose that makes you either fall madly in love with or shun forever, Bandit juxtaposes daring, bitter green leather which, according to a male admirer smelling it, exudes aloofness, rebellious intellectuality and absolutely requires an expanse of skin to show for its sensuality to bloom. 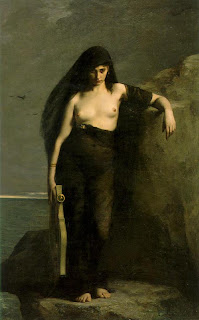 Classified as a leather chypré, Bandit manages to pose a glorious riddle that has a resonance even to today’s sensibilities, staying resolutely, brilliantly modern and quite young in spirit, contrary to many chypres and leather scents. There is simply nothing like it on the market, although many have drawn inspiration from its complex leather and greens accord.

“Beautiful but brutal” is how the perfumer Guy Robert described it and he couldn’t be more accurate about a scent that opens on the intense slap of galbanum greeted by hazy blossoms on a bed of raw hide, rendered by 1% of isobutyl quinoline!
A woman has seized her boyfriend’s bomber jacket, which has rolled into mud and grass and bitter Artemisia and still holds the remnants of that contraband cigarette he smoked (or some weed, according to some!) when he was waiting for the call for action. Her own female scent has permeated the lining with warmth, her floral-laced soap and powder, her brunette feral muskiness and the mossy feel of wet earth underneath. There is an androgynous energy travelling throughout the scent with a hint of S/M which addresses our need to reassess how we view women and their role. Bandit’s copious sillage and intense bitterness will surely make eyebrows rise and mother-in-laws shake with trepidation upon meeting you; unless they’re elegant and mischievous themselves, in which case they will reply with a wink.

It is of interest to note that men could carry off Bandit admirably and in fact lots of older gentlemen apparently do, according to French sales assistants working for the brand! Also interesting is that there an eau de toilette of Bandit is/was aimed at men, sold at Fragancenet.com: the main difference being it is very rough, with a distinct lineage to Aramis and a golden cap instead of the usual black one for the ladies.

Bandit had stayed in the shadows for long, before the fashion hysteria for Fracas in the 1990s brought deserved attention to the forgotten house of Piguet again. Indeed it was upon re-seizure of the Piguet house by Fashion Fragrances and Cosmetics that it got re-issued by Givaudan’s nose Delphine Lebeau.

The matter of its various concentrations and shades of difference betweeen different batches within the same concentration merrited its own research.
Therefore, for clarity we state the following: The original vintage composition came in parfum, eau de toilette and eau de cologne. The eau de toilette is the sharper of the lot, while the eau de parfum is greener. Parfum is sublime and smooth, but I am perfectly happy with my eau de parfum. This was a later, indeterminate addition, resulting in two versions of Bandit eau de parfum circulating in the market: one is the certified "new" version (which I have) which is close to the original, vintage formula that bears a certification on the box; and the other is the "reformulated" version that got issued before 1996 under Andrian Arpel. That intermediary version manufactured by Adrian Arpel is the one that was sold until 1996/1997 and older stock on etailers might be it. The bottles do not present visual differences in their opaque black with yellow edge around the label, apart from the box.

The certification on the box reads:


"Certification
This is the original formula for Bandit
created by this company with Robert Piguet
for the introduction of the perfume in 1944
Errol G.W.Stafford
President
Givaudan perfume corporation"


To help matters more, the “original” version also states “made in France”, while the other does not.
The eau de toilette that circulated under Andrian Arpel (Alfin inc. being his previous company name) bears this label:

The official Piguet site does not mention eau de toilette at all. However they do mention a body lotion available.
Bandit is available online at Barneys, Bergdorf Goodman, Nordstrom, First in Fragrance and various online stores (just keep an eye for all the different batches!)

And a lucky draw for our readers: if you want to be elligible for a sample of the Eau de Parfum, to see what all the fuss is about, please state so in the comments!

EDIT TO ADD: As of late 2012, a new reformulation of Bandit is under way by perfumer Aurelien Guichard to comply with latest IFRA allergens restrictions in fragranced products. Please note that the review refers to previous to that reformulation batches. We will update with a comparison as soon as a sample of the reformulated lands on our lap.

Pic of Bandit ad by okadi. Painting of Sappho by Mengin courtesy of perso.orange.fr. Pic of Bandit Eau de toilette from Fragrancenet.com