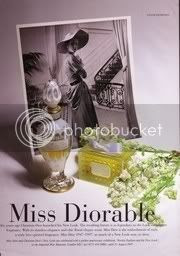 “I will tell you of a perfume which my mistress has from the graces and the gods of love; when you smell it, you will ask of the deities to make of you only a nose”. It is in those words that the Roman writer Catullus speaks of the seductive guiles of feminine fragrance. Miss Dior is such a seductive scent, compelling you to ask the deities for favors they ~alas!~ cannot grant you.
Almost everything has been said about this classic of classics that saw the light of day in 1947, so I won’t bore you with the same old, same old about the New Look and how it came about. Instead I will tentatively try to give you the feel I get from this scent and the associations I get in my mind.

Technically a floral leathery chypre, Miss Dior is a soigné miss only in exterior appearances, all prim and proper, because once inside the beast takes over and you smell the animal in its peak of copulating frenzy. There is some element of appocrine in the fragrance and I am not talking about sweat or urine. Although there is the clean overlay of aldehydic waxiness and soft flowers you catch a whiff of more feral, impolite essences. Under the clean exterior there is the carnal cat-call and you feel as if it is perhaps too scrubbed clean to be without ulterior motive. I suspect this is due to civet or civetone, because there is also a pronounced warmth in the background, despite the cooler opening.

The effect is more evident in extrait de parfum especially, which bears a marked difference to the eau de toilette. The latter is more powdery with the slightly bitter, cottony feel of coumarin and has an exuberant, bright green start due to the inclusion of galbanum and aromatic clary sage. Those two ingredients, along with styralyl acetate (naturally found in gardenia buds), is what makes me think of the original Ma Griffe by Carven to which it professes kinship in its initial stages. The galbanum touch might also recall the verdancy of Balmain’s Vent Vert (which came out the same year), although the latter is stridently green in the vintage edition which might seem jarring compared to Miss Dior. The latter also has a soft peachiness to it, characteristic of the Roudnitska touch presumely, which must be derived from some aldehydic compound or other molecular combination, different though from the C14 of Mitsouko. It is a peachiness that I have encountered in hair products, hence my assumption that it is chemically constructed.
The base is smothered in troubling patchouli, moss and earthy vetiver. However this is not the pared down patchouli of modern fragrances that is so ubiquitous in everything churned out at a frantic pace in the last couple of years. There is shady vibrancy in this that defies the clean aspect of the modern patchouli interpretations and a roundness in which notes do not compete with each other for stage space.

As I first inhale whiffs of Miss Dior sprayed into the air, I am transported into a mirage that entails majestic mountains surrounding meadows of lavender and narcissi in bloom, where ultra prim damsels wade through. Their long flaxen hair down, their eyes bright with anticipation in their precious moments of freedom as they turn past oak trees into a little slice of heaven; a pond filled with crystalline waters. And there, out of the blue emerges the catalyst: the object of fantasy and secret longing of who knows what exactly. Acres of moist skin, droplets shinning in the morning sun and wet hair that smells like it hadn’t been washed in a while; that fatty, waxy smell of familiarity, yet for them uncharted territory still. The pungency of horse and saddle distantly echoed in the background.


(Levis commercial uploaded by ladynea)
{The song is "Inside" by one-hit wonder Stiltskin (from 1994)}.

"...I created this perfume to dress every woman with a trail of desire, and to see emerging from her small bottle all my dresses...”.

Based on a formula by Jean Carles, it was composed by Paul Vacher and later re-arranged in 1992 by Edmond Roudnitska in extrait de parfum. It hoped to open new vistas of optimism after the privations of the war and in a way it did.

Unfortunately, as is so often the case with older creations, there has been some re-orchestration of Miss Dior’s symphony since. Very recent batches do not smell as oily and precise as they did, due to a mollifying of the top notes that deducted the sharp peppery greeness of galbanum giving way to a citrus leaf aroma, not unlike the one in O de Lancome. Also an attenuation of the chypre accord with more vetiver makes the new version less assertive and murky than it used to, rendering it less erotic in effect. At least Evernia Prunastri (oakmoss) and Evernia Furfurea (tree moss) are still listed, although to what ratio it is unknown (hypothesized to a lesser one).
If you happen upon Eau de Cologne bottles, those are surely vintage and they are a pretty good acquisition in lieu of extrait de parfum, if you can’t afford or find it.

It is interesting to note that by today’s standards Miss Dior smells “old-fashioned”, even though it was conceived as a young fragrance aimed at debutantes. Less polite souls would baptize it “old lady”, a blanket term so lacking in qualitative nuance that renders it completely useless. Indeed I was able to witness its effect personally. I happened to spritz a vintage (circa 1985) emerging from a ladies’ restroom, washing in front of two teenager girls who were watching me through the mirror while glossing their puckered lips. Aren’t those times tittilating for budding womanhood? Of course I volunteered to scent them, ever eager to introduce young girls into proper perfumes. One of them staggered back in what seemed like abject horror (judging by the look in her eye) professing the opinion it was “too heavy for her”, the other was more cooperative and allowed me two spritzes on her woolen scarf. Although at first she too seemed a little overwhelmed, after a minute, when alcohol had evaporated, she took the scarf close to her nose and nuzzled deeply. Yeah, there was a look of mischief in her eye as she thanked me. And there you have it: Miss Dior has this double effect; it will make some think it’s heavy and old, it will entrance others on second sniff. I am sure that girl went off to venture into romantic escapades with ackward beaux that could not appreciate the raw power of its labdanum and moss base; beaux whose fathers will be much more receptive to her nubile charms, American-Beauty-style.

Miss Dior is the scent of sexual awakening. A trully naughty perfume under the prim and proper exterior of houndstooth. But hounds do discover the best prey, don’t they?


NOTA BENE: The above review pertains to the 1947 fragrance formula and the reformulations happening till the early 2000s. As of 2011, the classic Miss Dior is renamed Miss Dior EDT Originale and Miss Dior Cherie from 2005 has become simply... Miss Dior. Please read this article with pics on how to spot which Miss Dior fragrance version you're buying.
For our French-speaking readers there is a nice clip about the 1947 introduction of the New Look with a confessionary voiceover by Fanny Ardant.
Click here:

We have more surprises on the Shrine for you later on...