The Truth About Patchouli Chypres or Floral Patchoulis: Not So Recent After All

Many perfume aficionados have noticed the ubiquitness of patchouli oil in modern fragrances; either in the form of the "fruitchouli" fragrance where the dominance of patchouli is given a sweeter overlay of usually berry fruits or in the form of the "floral patchouli" which we affectionately call the "nouveau chypre" (or "pink chypre" perfume). Technically nevertheless at least the latter is not as recent as all that.


In fact these so called patchouli "chypres" as many have suspected all along are not "true" chypres perfumes. Rather the dominance of floral notes plus patchouli and the relative lack of animal notes and musk places them in a slightly separate group which I had been meaning to tackle for a long whilte. That group however is none the less revered taking into account the many classic perfumes which are classified within it.

These floral patchouli perfumes have mainly become possible through the introduction of "luminous/transparent jasmine" in the late 1960s aka the Hedione ingredient which "reads" as fragrant lightly green air above the jasmine vine. The pliability of this material makes it the perfect bridge between the sweet medicinal-woody note of patchouli and the rest of the floral components. Indeed most of the patchouli perfumes with dominant floral elements are fitting neatly into the 1970s and 1980s slot: Diorella (1972). Aromatics Elixir (1972). Coriandre (1973). Paloma Picasso (1984). Knowing (1988).

If you think about it the "nouveau chypres" with Narciso for Her eau de toilette being in the vanguard didn't deviate much from this path. The patchouli is "cleaned" up of its darker chocolate and peppery aspects but the woodiness prevails alongside a modern Amberlyn (ambrox) base and the overlay of sweet orange blossoms; a noticeable floral component.  White Patchouli by Tom Ford also divests of the dirtier aspects of patchouli and increases the white flowers antel it's a prime example of the contemporary translation of this concept. There is also the new Aromatics in White by Clinique; fittingly a flanker to the original Aromatics Elixir perfume from the 1970s. I have noticed that the use of "white" in the name lately has taken to suggest a sizable slice of patchouli in the modern style. 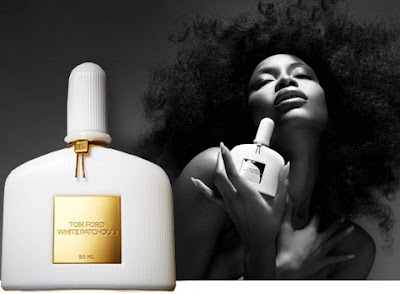 In what concerns the Diorella fragrance by Dior the main chord is built around Hedione-Helional-eugenol-patchouli. The fact that Helional used in 5% quota in the formula carries an airy and watery hint with it speaks volumes; it's no coincidence that Diorella works very very well in the heat! Especially combined with the copious citrusy essences on top. Hedione 10% and cis-jasmone 2% plus natural jasmine absolute gave the richness of the classic Diorella floralcy. Rose only played a very very small part in the original composition. A hint of peachy note was possible through C14 aldehyde. The softness of that note plus the airier-watery components conspire to give an illusion of melon to our noses.

Some of the basic components in Diorella are also taken unto Aromatics Elixir by Clinique though the formula there takes a turn for the rosier and darker without pronounced citrus notes. Helional and Hedione again combine with patchouli as well as vetiver (for an enhanced earthy feel) and woody violets. The bouquet is further enhanced and "opened" with lily of the valley synthetics like the air seeps into a newly opened bottle of red wine and lets it "breathe". I always find that either Hedione or lily of the valley are the decisive "keys" with which a composition of formula unlocks its message.

I'm using the example of Aromatics Elixir to further discuss the likes of Aramis 900, Paloma Picasso and Knowing by Estee Lauder. These form a tight group of kinship. Not coincidentally the common perfumer at the helm of IFF and commissioned with the work for Lauder (Aramis and Clinique are both Lauder companies) was Bernant Chant; he of Cabochard (a more hardcore leather chypre fragrance) as well as of Aromatics Elixir and of Aramis classic for men.

Knowing in particular is an undersung marvel and "reads" today as a very venerable authentic chypre thanks to its perfume-y powdery character. But its progeny must be traced into the floral patchoulis of the previous decade. Specifically Coriandre.

In Jean Couturier's Coriandre fragrance the key ingredient is the similarly jasminic Magnolione (comprising 20% of the formula) alongside 10%  patchouli. The rose base is founded on geranium making the trasition of Coriandre into a shared fragrance more easily imagined. The spicy top predictably includes coriander but also the intensely green "budding" note of styralyl acetate (the scent of budding gardenias) and ylang ylang. So it's again a floral aspect given a woody underlay (apart from vetiver and cedar ingredients there's also sandalwood; arguably the genuine Mysore variant back in the time of original launch of the fragrance.

The difference with Knowing is that the American taste for almondy fluffiness manifests itself via the use of heliotropin, while there is also the component of a white floral that makes its presence known: tuberose with its bubblegum facets turned up a notch.

In Paloma Picasso/Paloma Mon Parfum the perfume is saturated in castoreum which might trick us into believing we're dealing more with a hardcore chypre a la Cabochard than with a "floral patchouli" as we defined it in the introduction of this primer. But the thing with perception -and the point of this primer- is that it is influenced by context. In yesteryear's milieu perfumes like Knowing or Diorella were differentiated from the more tightly clustered classic chypres. In today's comparison with the syrupy fruities or even the "nouveau chypres" they seem like the end of the hardcore spectrum. Similarly the newer contestants to the throne appear like the emperor's new clothes whereas they form the distant relative to a long line of noble lineage.

If Francis Kurkdjian and Christine Nagel (both credited with Narciso For Her; Nagel specifically also the founder of the fruitchouli with Miss Dior Cherie) created something new, like Isaac Newton they must have seen further by standing on the shoulders of giants.