Samarinda was an unexpected surprise in my mailbox replete with an eco-benefit (more on which below) and it was a pleasant one which prompted this review. Independent perfumers come with the benefit of being able to both experiment with no concern of focus groups and with the passion that comes with doing what you believe you should do instead of what you know you should do in order to sell well. Not that artisanal perfumers are beyond the scope of a true business, if they have leaped off the amateur description concocting elixirs in their back kitchen, but you know what I mean; wouldn't you rather have someone disregard trends, likability stakes, IFRA restrictions and focus on what seems "like a good idea, let's try it out and see"? Charna Ethier of Providence Perfume Co. is one such. 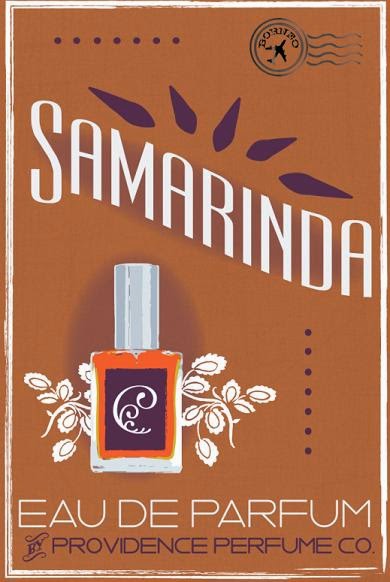 Ethier is a botanical perfumer, working with natural essences and what I believe are extractions from materials not common in mainstream (and even niche) perfumery, such as choya nakh, a roasted seashell  essence which is truly unique and which I personally find captivating thanks to its evocation of the animalic marine world. Samarinda is using this essence, alongside many others which initially seem incongruous (the above mentioned choya nakh side by side with Sumatran coffee alongside jasmine rice, oakwood, leather, rum ether and flowers), but the blend is quite astonishingly tempered and uplifting. The cardamom note on top is so fitting to coffee that it transports me instantly to a warm morning sipping a demitasse in a middle-eastern setting. But there's further along the map that this perfume can take us…

The sweetish floriental has a delectable boozy (richly rum-like for armchair travelers on the high seas seeking pearls in oysters down the depths of the Indian Ocean) and a lightly smoky vibe which engulfs you with none of the intensely floral  -and then magically dissipating- pong of some all natural perfumes. Maybe the choice to do an orientalized take on Indonesia, as Samarinda aimed to do, is a wise choice olfactory-speaking, or maybe Ethier came up with just the right balance in her palette; the result is that Samarinda is a joy to wear on skin from the lightly spicy, juicy opening with its vanillic underpinning right down to the  smoky-warm woods of the drydown. It's certainly smelling better than actual Indonesia with its yeasty trail in the air.

And what's the eco-benefit? 5% of all sales of Samarinda will be donated to the World Wildlife Fund to promote the protection efforts in Borneo and Sumatra, home of hundreds of endangered rhinos, tigers, elephants and orangutans and thousands of identified and as yet unidentified plants.

In the interests of disclosure, I was sent a sample vial by the perfumer directly.
*Share with link: Tuesday, March 25, 2014