Hiram Green is no newcomer to perfume, though his site would suggest otherwise, touting Moon Bloom as their "debut fragrance". Simply, this is a new outfit for someone involved in the field for long through Scent Systems, who has relocated and conducts a new brand stationed at The Netherlands using all natural ingredients. Now under his own name, he embarked on a new adventure which, by the sniffs of Moon Bloom, smells promising.


Moon Bloom is a lush and elegant tuberose themed eau de parfum. Tuberose is a tropical night blooming flower. Often referred to as ‘the mistress of the night’, tuberose is an admired theme in perfumery because of its soft and creamy but also powerful and narcotic aroma. It's enough to know that in Victorian times maidens were prohibited from smelling the rather waxy, small white flowers lest they experience a spontaneous orgasm; such was the reputation of this heady flower! The name does bring to mind the Victorian Moon Gardens, gardens in which night-blossoming white flowers were planted so that the sun-wary ladies could protect their alabaster complexions from the ravages of the sun in the absence of SPF 50+. (Of course the term "ravages of the sun" is all relative, speaking of the latitudes and longitudes that constituted the Victorian territories, but you get my meaning. Besides is it me, or does the silvery sheen of the moon seem very conductive to secret affairs leading to orgasmic heights despite the precautions placed by the wiser elders?).

Moon Bloom includes generous amounts of tuberose absolute, jasmine absolute and ylang ylang, but it doesn't clobber you over the head with them all the same, like many hysterical florals do. There are also notes of creamy coconut, leafy greens and hints of tropical spices and resins (plus a hint of vanilla?) which smother the floral notes and produce something that is soft and strangely fresh, like the air of a greenhouse.

The natural perfumery genre isn't devoid of wearable and beautiful specimens; it just takes a superior critical judgment, a steady hand and the aesthetics to forget photo realism and instead try for something that is imaginative and beautiful in its own right. I'm willing to make an exception on that last requirement, because Moon Bloom smells at once life-like and at the same time like it was made with stylish panache and not just slavishly copying Mother Nature. The coconut-lacing of real tuberose and its subtle green-rubbery facets are captured in a polished melange which is both pretty and revealing of the course of the blossom through the fabric of time: from greener to lusher to ripe. Tube-phobes (and I know there are many of you out there, don't hide!) should drop their coyness and indulge. Moon Bloom is a purring kitten, if there ever was one. 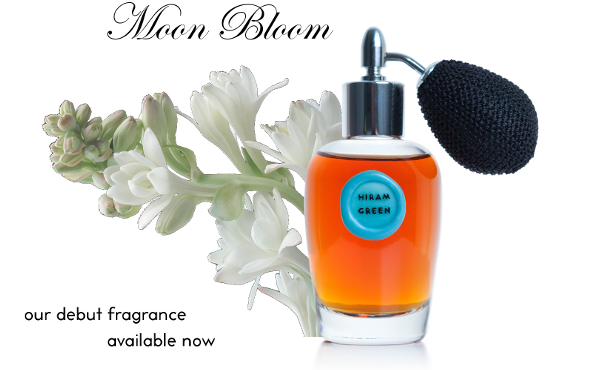 Both the 50ml bottle (with classic pump atomiser) and the 5ml travel atomiser are refillable. 5ml retails for 25 euros and 50 mail will run you out of 135 euros on the Hiram Green site (Please note that non EU buyers are exempt from sales tax, so calculate 20% less or so.

Disclosure: I was a sample by the perfumer.